Sony just started sending out invitations to a pre-IFA 2012 event, a press conference that will take place on August 29th in Berlin. You just need an IFA press accreditation to have a look at the latest Sony Xperia smartphones, that will be announced there. 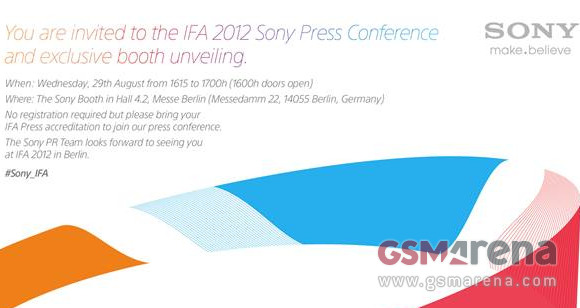 Sony also promised an exclusive booth unveiling after the press conference, so you’ll see some exclusive handsets taking off. Members of the press will get cozy with the new smartphones. Among the models we may see we could find some of the Xperia phones that have been rumored over the past months. These include the entry level Sony ST26i Xperia J, the LT26ii Xperia SL, basically a remake of the Xperia S with an upgrade and the LT29i Hayabusa with a 13 megapixel camera and a 4.55 inch HD display.

Finally, there’s also the Snapdragon S4-based Sony LT30i Mint, also with a HD display and a 13 megapixel camera. Not sure which model will actually make it, but all of them are interesting. After all Sony has the habit of announcing a bunch of phones at a time, not just a single model. Will we also see a new tablet?