Sony just ended the mystery countdown on its official Facebook Page, with the announcement of the Xperia Miro handset, that you can see below. This is a midrange social-focused handset, with specs to match its looks. As you can see, this unit has some sort of an “inverted chin” thin going on. 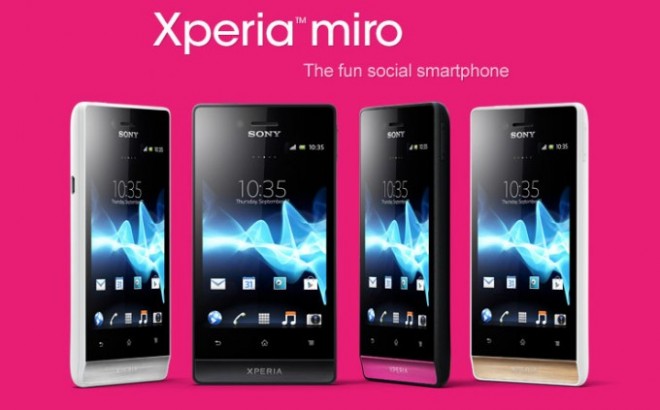 Sony Xperia Miro borrows some traits from the Xperia Sola and it comes with a 3.5 inch display, a 5 megapixel camera, Android 4.0 ICS and Sony’s UXP NXT software. The Facebook Inside Xperia concept has been expanded, bringing closer integration between the phone and the social network. It was a good idea to promote a “Facebook phone” with a Facebook countdown, I guess. This seems like an Europe-only product and there’s no word on US launch, but when the Xperia Miro does launch I guess it’ll be free on contract.

The Miro comes in silver, black, pink and gold. It even has DLNA, that’s always a welcome feature, even on lower end devices. 30 fps video capture is promised by the 4MP camera and we also get a pretty strong speaker, or so says Sony. There’s also a front camera if you want to videochat! Video with details right here: