I’ve been expecting the Sony Xperia S handset with very much interest, as I considered it to be my next phone and now it has arrived at GSMDome.com for testing purposes. It’s a beautiful phone, everyone can see that, but is there more to it than meets the eye? Let’s find out in the following lines and in the video after the break. 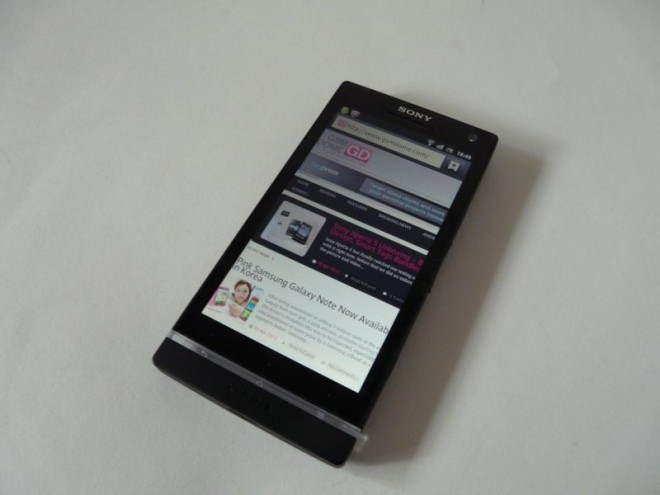 We’re dealing here with a handset unveiled at CES 2012 to much fanfare, together with the Xperia Ion model. This device doesn’t have LTE like the Ion, but that it does have is a crisp HD display and 12 megapixel camera. Its design is pretty and the case is 10.6mm thick, while the entire smartphone measures 144 grams in weight. Xperia S is protected by a dirt repellent layer, that will even allow you to write using a market on it and it will go away once you wipe it, so how cool is that? The handset relies on a microSIM card slot, that’s placed under the back removable part of the case.

The battery is non removable, unless you plan on using a screwdriver to drive it out. Also, there’s no microSD card slot on board, so you’re “stuck” with 32GB of internal memory. The screen here is a 4.3 inch 1280 x 720 pixel unit, with Sony Mobile Bravia Engine technology on board and 342 ppi density, more than any other phone on the market. Other stuff worth mentioning is the fact that the screen is a LCD one, but it gets LED backlighting. The same display has a protective layer embedded on top of it, so it’s protected against scratches and other problems like that.

Moving on with the design, we’ve got some pretty uncomfortable to use volume buttons on the side, plus a very tiny and thin camera button, that’s also hard to press. The HDMI port and microUSB port are both on the sides and they’re covered with some lids that are both hard to remove and hard to put back. Back to the hardware of the handset, we’ve got 32GB of internal memory, 1 GB of RAM and a dual core 1.5 GHz Qualcomm Snapdragon MSM8260 processor with Adreno 220 GPU. 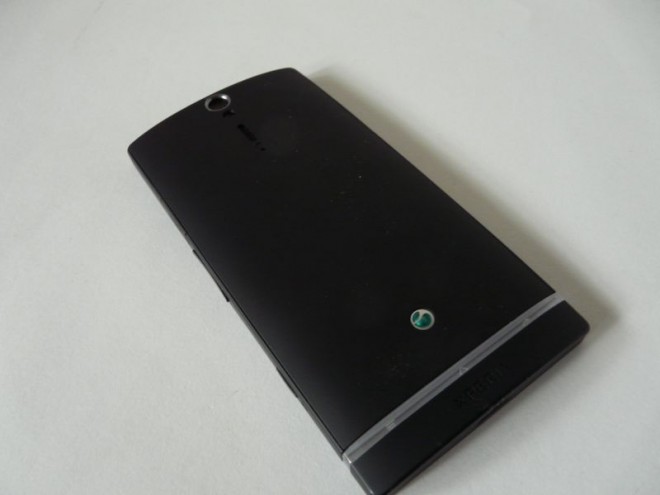 On the connectivity side, we’ve got HSDPA 14.4 Mbps, WiFi, DLNA, NFC, Bluetooth 2.1 and microUSB 2.0. On the NFC part things are very interesting, as demoed in the video review below. The phone is bundled with two NFC Smart Tags. These ones are like tiny badges that once they touch the Xperia S they change its settings in bulk. Imagine a Car Tag that opens up the handsfree control and GPS, or a Home Tag that opens up the weather and increases the volume, or maybe the Office tag that puts the phone in silent mode and opens your calendar. You can customize those tags however you want.

Moving on, at the back we’ve got a pretty solid speaker and a 12 megapixel camera with autofocus, LED flash, geotagging, touch focus, face/smile detection and image stabilization. It does 1080p 30 fps video capture and it’s doubled by a front camera for videocalls, a 1.3 megapixel unit also able to do 720p 30 fps capture. Obviously we can’t avoid talking about the transparent bar at the bottom, the one that can be seen from almost every viewing angle and it shows those classic Android button symbols: Home, Back and Menu. These are mere symbols, since the buttons per se are placed above the bar in a short space marked with bright dots.

It’s pretty hard to press these buttons, especially if you have big fingers. As far as the OS goes, Sony Xperia S runs Android 2.3 Gingerbread, with the promise of Android 4.0 etched on its box. It’s also got a bunch of custom widgets and the TimeScape and MediaScape functions. Both are vertically scrolling thumbnail lists, one for media files and the other for socializing through Facebook, Twitter, but also listing calls and texts. TimeScape also has two new widgets, one showing what people are saying and one showing the number of updates done by your favourite contacts.

Other specs worth mentioning for this phone are accelerometer, gyroscope, proximity sensor, compass, AGPS and Glonass detection. We also have active noise cancelling available and speaking of audio quality, the speaker was pretty good, the equalizer looks nice and has some varied options, but the headphones bundled with the Xperia S are really poor, especially in comparison with last year’s  models. As far as the battery goes we have a 1750 mAh unit here, that sadly doesn’t deliver the expected results. You get 7-8 hours of functioning time from it and about a day of total usage, which is sad for a smartphone of the year 2012. 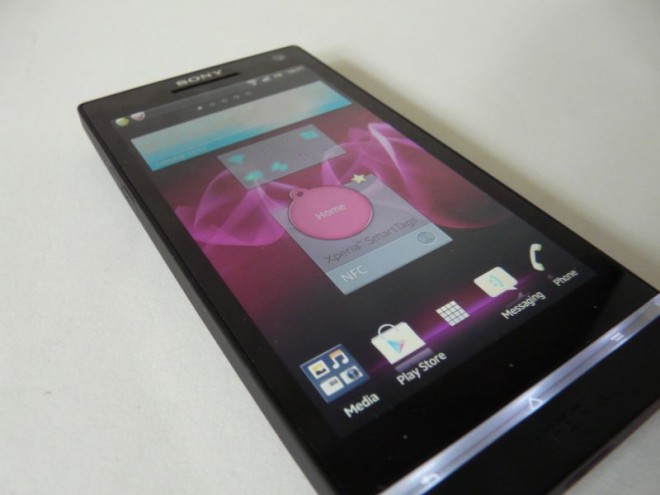 The good thing, though is that the new Xperia comes with a fast charging feature, that gives you an hour of functioning time with 10 minutes of charge. As you see in the video review, the quality of the video playback and games on this 720p display is great, so nothing to complain about it here. What I can complain about is how long it takes the phone to completely load a picture it has taken with the 12MP camera and also how long it takes it to focus when filming. Other than these problems, the Xperia S has no lag whatsoever, even if it uses a dual core CPU while other devices rely on quad core processors already.

Everything is snappy on it, but as usual as task killer will come in handy before things get too crowded when it comes to how much memory the apps take up. All in all we’ve got a pretty looking phone, with a transparent bar, lots of storage, a pretty good camera (but not perfect, specially in video capture), some nice (but still not too evolved) software customization and a great display. Aside from the poor battery and the bad response of the capacitive buttons, this device is a solid one, but if you can’t get past those disadvantages and the pretty big price at the moment, I suggest you wait for one of the other new Xperia units. Check out the full review below for more details: