Sony Xperia S has finally reached our testing area and we’re playing with it right now. Before that we did an unboxing for y’all, shown in the picture and video below. We’re dealing here with a device announced at CES 2012 and possibly the most appealing Sony phone right now. Let’s see what it’s all about. 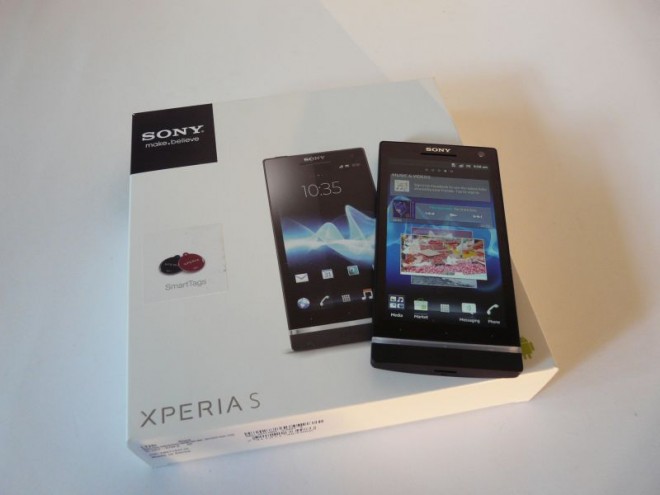 The device comes in a very wide and white box, that holds the handset with a plastic protection, its microUSB cable, charger, headphones, manuals and a set of Xperia Smart Tags. The latter are a bunch of accessories that interact via NFC with the phone and change its settings depending on the situation. You can place a smart tag on your car’s dashboard and wave the phone above it to make it start the GPS and voice command features. Also, you can place one at your offering and have it start the Office move, so when you wave the Xperia S over the Smart Tag it’ll go silent and adapt to the situation.

Sony Xperia S is available in black and white and it comes with a 4.3 inch 720p screen, Bravia technology, Android 2.3 Gingerbread. It’s a bit heavier than it looks, at 144 grams and its box mentions Android 4.0 ICS as coming soon… I’ll be back in a couple of days with a full review of the device, but for now I can say that I really like that transparent area at the bottom, although it may confuse you when it comes to the actual place you have to press on to trigger the Home, Menu and Back buttons.