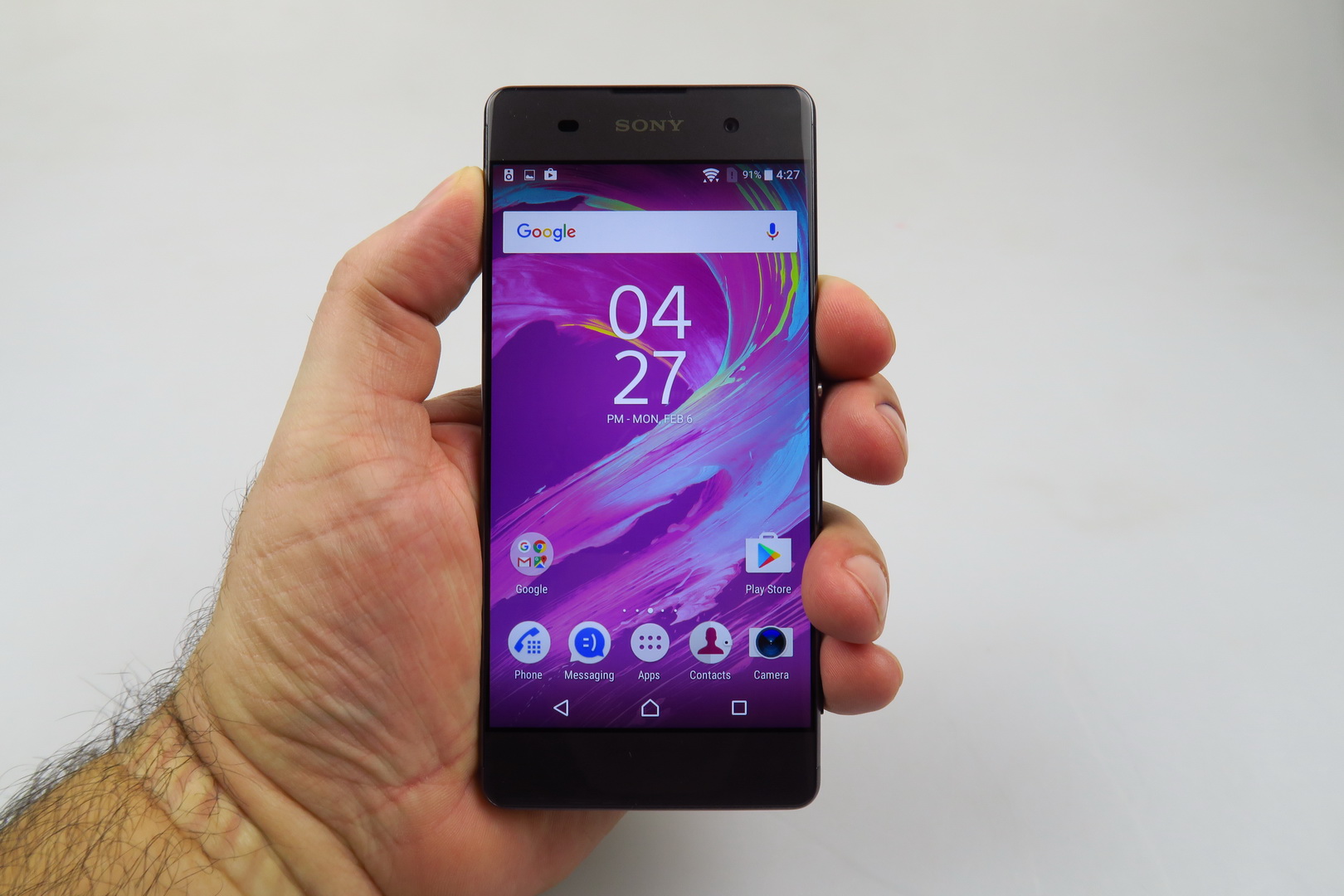 Since the Sony Xperia XA1 debuted at MWC 2017, we thought it was fit to analyze its predecessor, simply because we didn’t get to last year. The handset debuted in the first half of 2016 and it gets a full review below. It’s an edge to edge screen midranger, one of the few of its kind, even in a time when screen ratios were going crazy. Priced at around $200 nowadays, this is one of the prettiest Sony phones we’ve tested. 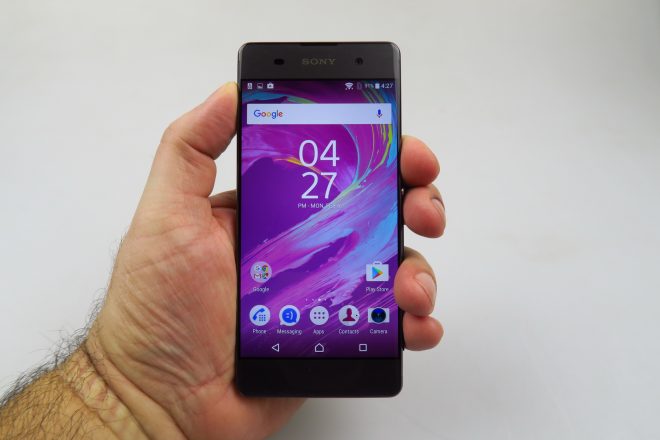 Now let’s discuss the design! This handset measures a reasonable 7.9 mm in thickness, which is the exact same waistline as the Galaxy S7. It weighs 137.4 grams, which is quite OK and it’s 17 grams lighter than the Xperia Z5. It’s also 0.6 mm thicker than that model and it’s quite a comfy machine, with good grip. It’s pretty long for a 5 incher and Sony compensated the lack of side bezels with hefty ones at the top and bottom.

Still, that edge to edge approach on the side makes the phone very pretty. Keep in mind that this is not a waterproof phone, unlike many other Xperias from recent years. The build is solid and the back is made of plastic. Buttons are comfy and the sides are made of metal and plastic. Available in black, white, pink and lime, the Xperia XA is a bit of a fingerprint magnet upfront and it comes with 2.5D glass and a pretty OK build overall. 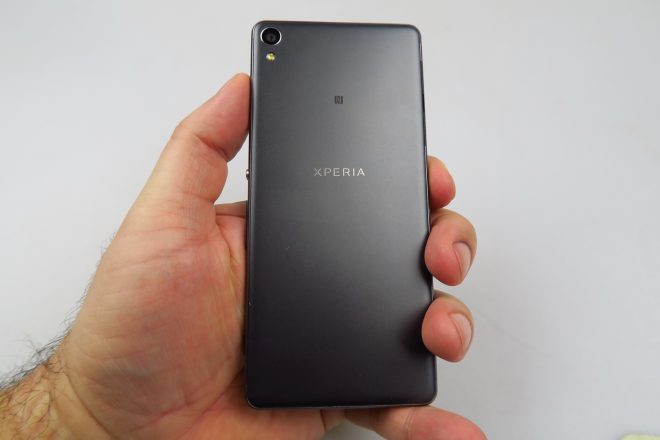 It’s a well made phone overall and for $200 it’s a good purchase. Moving on to the display, there’s a 5 inch screen here with an IPS LCD panel, that has a 1280 x 720 pixel resolution and Mobile Bravia Engine 2 technology. There’s a 2.5D glass technology upfront and Sony employed an unnamed screen protection. The video player has a great UI, TV guide included and some options are included here.

The viewing experience was pleasant, on account of the very narrow bezels and the lack of edges on the side, as if the image were floating into nothingness. The colors are a bit oversaturated and I felt that the image was a bit too white. View angles are pretty wide, the contrast was rather good and I like the fact we had that top and bottom wide edge to hold on to during gaming sessions. 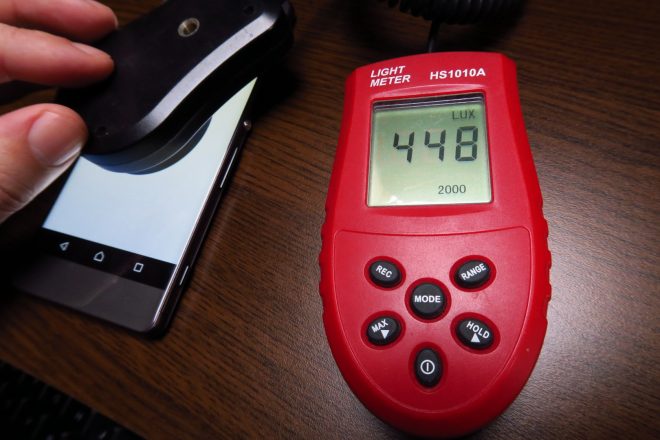 Pixels have an RGB Stripes arrangement here and the luxmeter showed us a value of 448 LUX units, which is great for a low midranger. Thus, we surpassed the LG G4 and the Lumia 950 XL, but scored below the Lenovo Vibe X3 and iPhone SE. Settings are generous, including brightness, adaptive brightness, sleep, smart backlight and Image Enhancement.

That section lets you choose between Off, Mobile Bravia Engine 2 with well calibrated color sand Super Vivid Mode with very vivid colors. Then there’s RGB, with 3 sliders to set up the red, green and blue hues. You can also set the font size and overall I’d say the screen is good, but the colors were a bit messed up. Moving on to the hardware, there’s a MediaTek Helio P10 octa core chipset here, clocked at 2 GHz and it comes with a Mali T860 MP2 GPU. 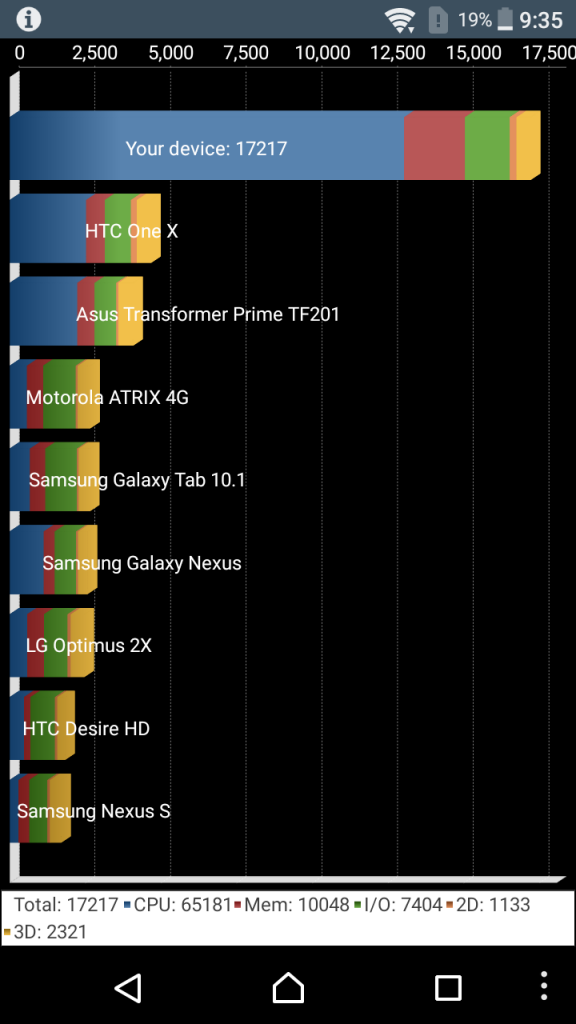 There’s 2 GB of RAM in the mix, 16 GB of storage and a microSD card slot. The handset doesn’t suffer from lag itself, but there are some fluidity bumps, when many apps are opened. Also, gaming isn’t exactly top notch, since Riptide GP Renegade loses frames during the game. Benchmarks were above the Huawei P9 Lite and below the Lenovo K6 in Quadrant and in AnTuTu we scored past the Moto G4 and below the Huawei P9 Lite.

3DMark Ice Storm Unlimited brought us above the Allview X4 Soul in results and below the Huawei P8. Overall, results were modest, but typical for an average midranger. When it comes to temperature, we did a GFXBench test, but that one didn’t run, so it doesn’t count. In Riptide GP Renegade we reached 42 degrees Celsius, so there’s a bit of overheating going on here. 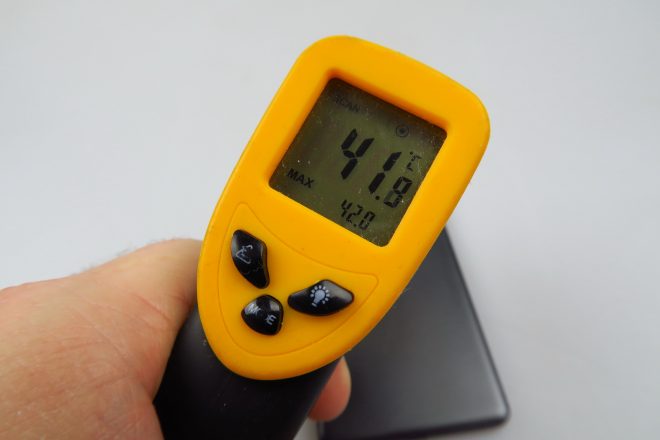 On the battery front there’s a Li-Po 2300 mAh unit, that provided us with a 7 hour and 57 minutes video playback time, which is rather OK. We surpassed the Honor 7 and Honor 8, but scored below the Xperia Z5 and Lenovo K6. In PCMark we got to a less impressive 5 hours and 9 minutes, which is rather weak and placed on the 100th spot. It only beats the LG G Flex 2, if you’re looking for big names.

Meanwhile, even the Xperia Z5 and Xperia M5 beat it. Charging was done in 2 hours and 1 minute, which is rather OK and superior to the iPhone 6, so that’s got to count for something. Settings include Battery Optimization, as well as the classic Stamina Mode, that restricts GPS, vibration and image enhancement for some extra hours of usage. 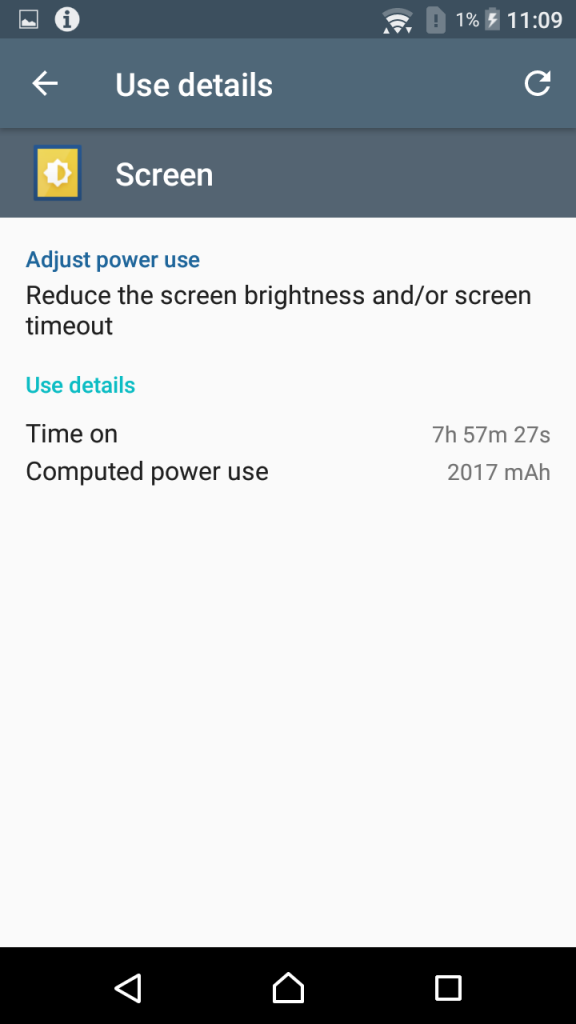 Then there’s Ultra Stamina Mode, that cuts down all features in favour of the basic ones. WiFi and mobile connectivity also get cut. Overall, a modest battery. Now let’s get to other tests, like the acoustics one! We’ve got a single speaker at the bottom and we didn’t get heapdhones with our test unit. There’s FM radio here and the Music app keeps some of the elements of the classic Walkman app.

It has Spotify integration and many options, like Clear Audio+, Sound Effects, an EQ with 5 custom channels, Clear Bass slider, Dynamic Normalizer, Surround Sound and headphone type options. There’s also a switchable theme. The listening experience involves an OK volume, nice high notes, mid level bass and a bit of distortion at max volume. The decibelmeter test shows a value of 88.4 dBA, at the front and back. 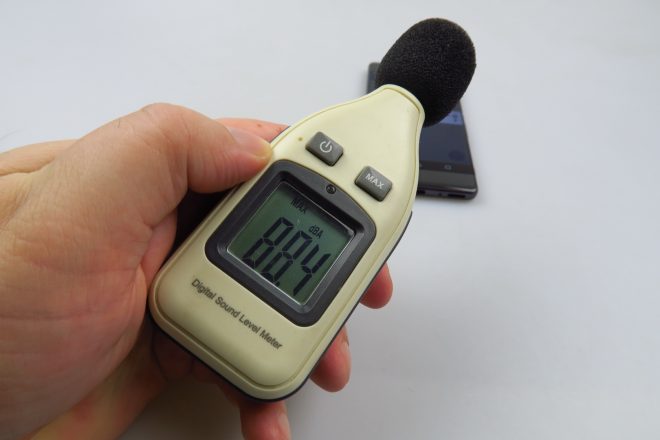 Volume is OK and we surpassed the OnePlus 3 and Galaxy S6 Edge+, but below the LeEco Le Max 2. Everything checks out OK here, so let’s move further. Time to chat about the camera, quite a pleasant surprise here. There’s a 13 megapixel back shooter, with a 1/3 inch size and Exmor RS technology, as well as hybrid autofocus and F/2.0 aperture.

Upfront there’s an 8 megapixel camera with 88 degree lens and Exmor R sensor. The camera app starts up fast, when the camera physical button is pressed and the UI is typical for an Xperia. Focus speed is mid level, but the zoom is quite fluid. The Manual options include Scenes (12 or so), white balance, exposure, ISO, timer, HDR and resolution. 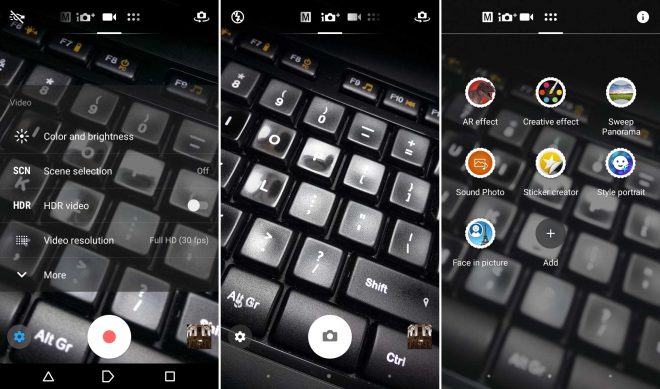 There’s also object tracking here, as well as metering. Video options include HDR video capture, Steadyshot stabilization in some basic form and color and brightness settings for filming. Camera apps include augmented reality ones and panorama, of course. Moving on to the pleasant surprises, the gallery of shots was taken in early February, on a sunny but very cold day. 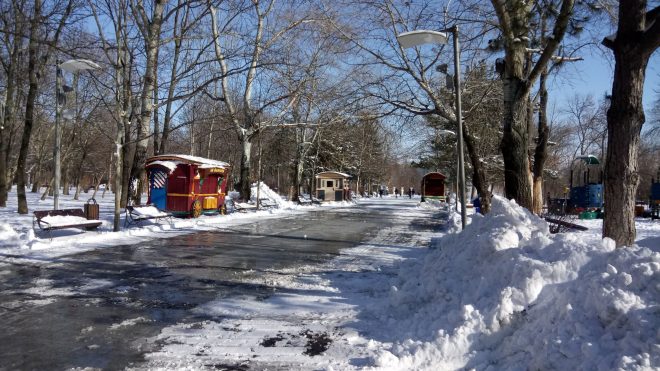 Colors were great, the texture of objects was fine and the pics were quite bright. I found a bit of oversharpening going on here and it took quite a while to focus during closeup situations, but it’s well worth it. That’s because they look mighty fine. Selfies were rather OK, but also a bit too white. Clarity was rather good. The details were great, in both closeups and landscape shots. 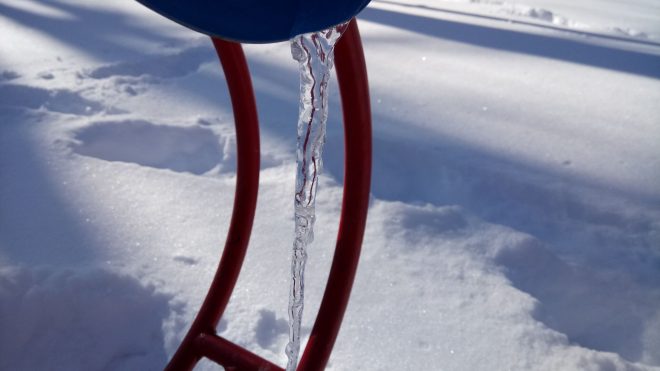 The Panorama was nice, even with the sun in front of us and in general I was very happy with the shots here. I liked the texture of snow, that big bridge and the dynamic range was also well calibrated. Some of the best closeups ever were taken with this $200 phone. Zooming in was also done in solid manner, without losing many details.

This phone can easily do battle against a Galaxy A5 2016, a ZenFone 3 and Huawei Nova, but those cost double the amount. Sadly, not everything can be peachy here, as the low light shots were very poor, foggy and yellow. The flash was OK, I’d say, but in general there was too much white and yellow. Street lights are huge and the pics were not that clear, especially compared to the day time ones. 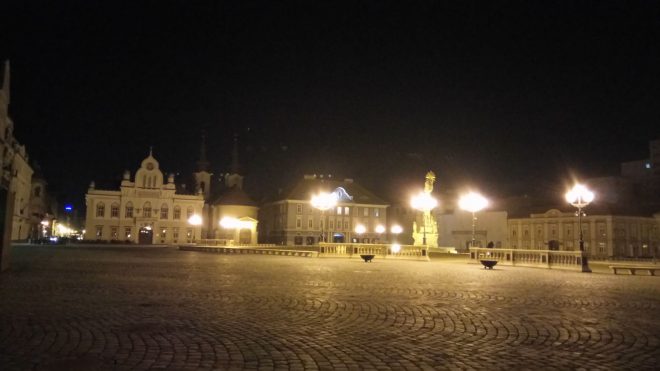 Colors were mediocre and there was a bit of violet and blue hue at the top. Only closeups are decent in this case. This nocturnal capture was so bad, that it was even surpassed by some of the lower priced Chinese handsets. Video capture was done in MP4 format, in Full HD, at 29 or 30 FPS and also with a pretty good 17.7 Mbps bitrate. Zooming in resulted in some loss of details and the microphone was quite OK, minus the wind of course, which it couldn’t handle.

The colors were nice, in spite of being burnt here and there. Focus was solid and even the electronic stabilization was quite good. Some clarity loss was registered in the distance and the HDR video exaggerated the intensity of some colors. I’d find this capture surprising, because it surpassed my expectations and the small problems it had weren’t deal breakers at $200.

Low light videos were done in Full HD, 30 FPS and 17 Mbps, but they were fuzzy, grainy and had an OK audio recording. Halos were big for the light sources and zoom brought on quality loss. Focus was OK, there was a lot of yellow hue and colors weren’t that bad. I’ve seen worse, so I’d say that filming with the Xperia XA is passable or even good.

On the web browser front, we get Chrome preinstalled here, with a mid level loading speed and for input we get SwiftKey Keyboard, with Swipe and big keys. Sadly the benchmarks like Sunspider had rather modest results for Chrome here. As far as connectivity goes, the slots are easy to access via a flap. There’s a single SIM or dual SIM version of the phone, with nano SIM card slots. 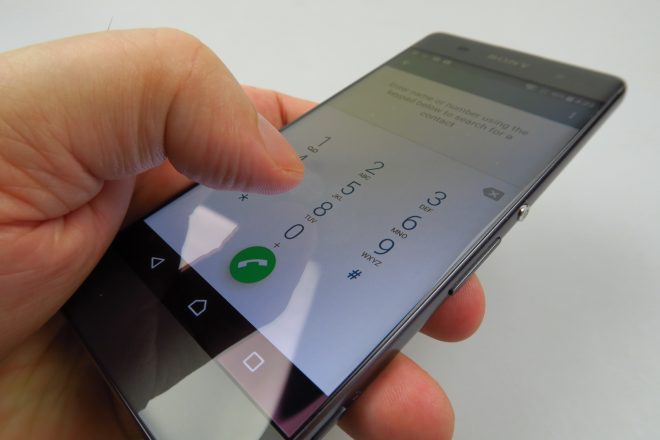 There’s LTE Category 4 support here, WiFi a/b/g/n support as well, NFC, Bluetooth 4.1, DLNA and Miracast. USB OTG is also in the mix. The Dialer features an answering machine and the calls weren’t very loud, but they were clear. The microphone was also not the best I’ve used. We did a SpeedTest and achieved 74 Mbps in download via 4G and 47 Mbps in upload. 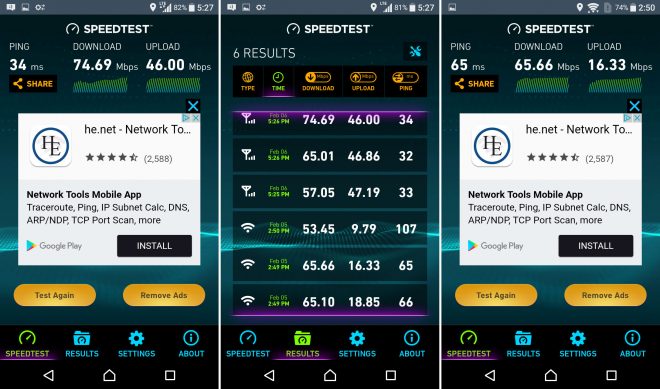 With WiFi we achieved 64 Mbps in download and 18 Mbps in upload, both within limits, but the WiFi upload speed could be higher. Now let’s talk software! Xperia XA runs on Android 6.0 Marshmallow, with Xperia UI on top and lots of gloss and transparency. Lots of white and gray are used for the menus and the multitasking is done via carousel. 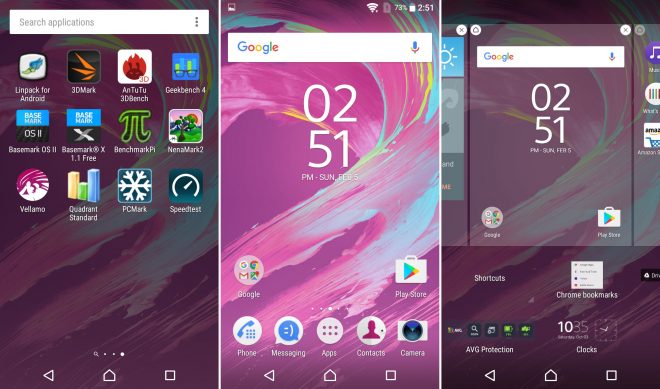 The dropdown section includes Quick Settings and notifications, in rather typical affair. Keeping the homescreen pressed triggers the widgets, with a nice look, as well as wallpapers, themes, icon size and icon pack. There are also transitions to consider here. Settings are nothing special and no, there’s no fingerprint scanner here. The preinstalled apps list includes 44 names, which is quite a lot, for this handset.

We’ve got a PlayStation app, Weather, What’s New, News, Movie Creator, Sketch and Track ID, Plus Spotify and Amazon. this is pretty much it and it’s time for the verdict now! 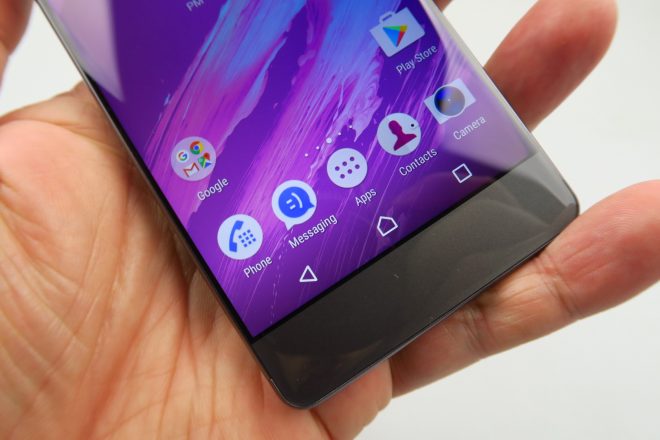 In the end, the Sony Xperia XA is a pleasant surprise on the camera front, but it’s also a very nice media phone. That means pictures, music and video watching, plus the looks as a big plus. There’s no promise of solid gaming and performance is rather modest, on account of the CPU and RAM. This is the midranger by definition, a modest one, that doesn’t want to replace a flagship, but rather some aspects of it.

You won’t feel frustrated by this choice of a Japanese product, especially when taking pics and listening to music. It’s certainly better than most $200 and sub $200 Chinese phones you see on the market today. The updated price is here.