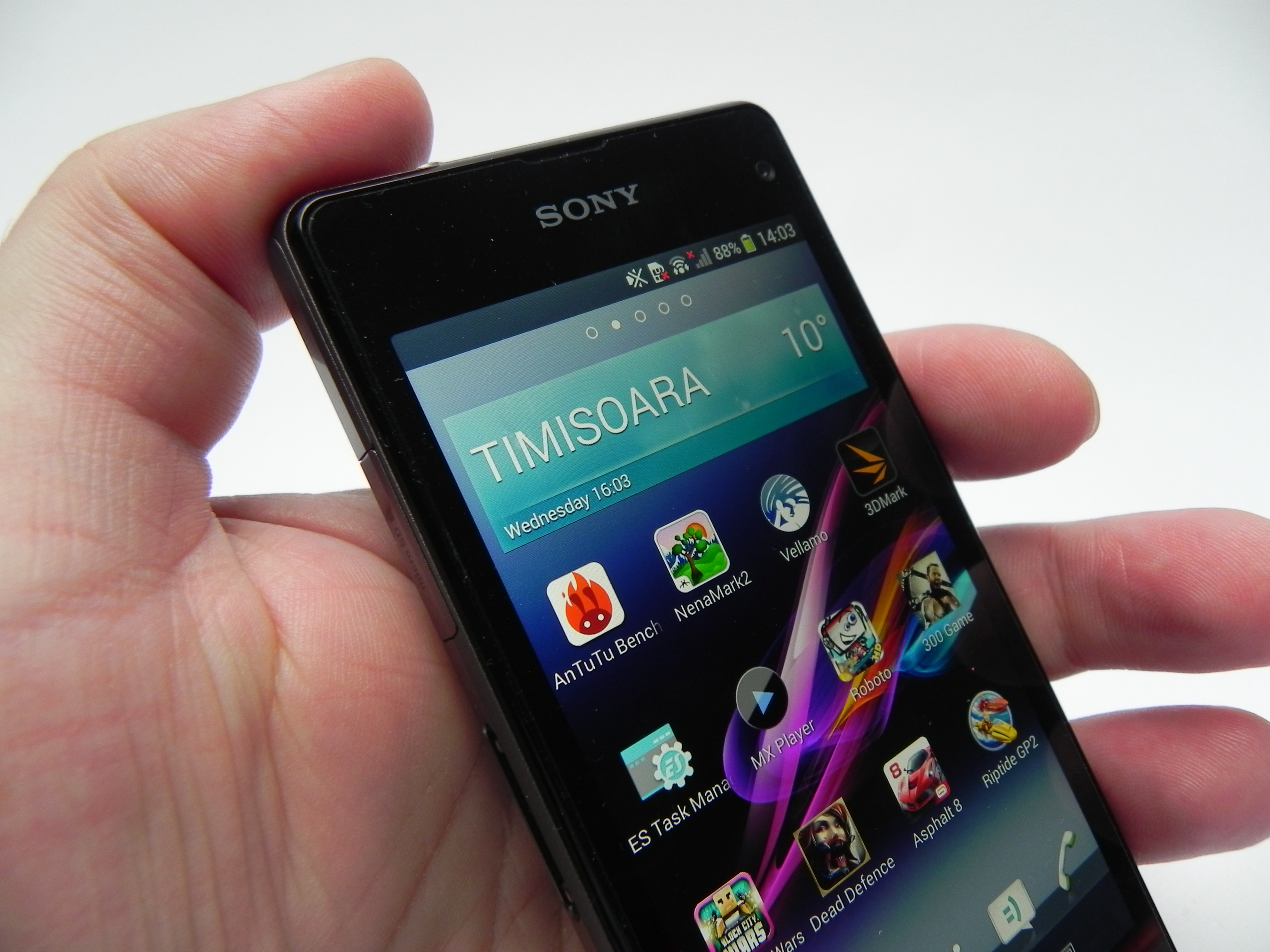 The Sony Xperia Z1 Compact surprised everyone at CES 2014 by combining a smaller diagonal with such hardcore specs. Calling this a “mini” Xperia Z1 wouldn’t do it justice, I have to say. Anyway, let’s analyze this model in the review that follows below. 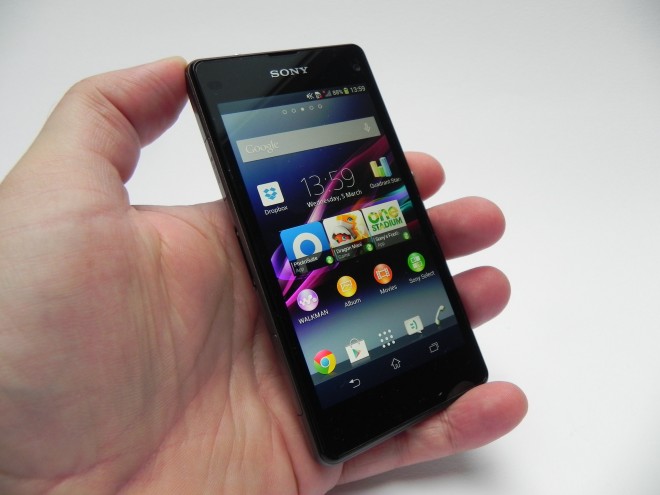 I should remind you that I recently reviewed the Z1, so the features and aspects are still fresh in my mind. The Xperia Z1 Compact came in January and it was launched in the stores only weeks ago, so it’s pretty fresh even now. The product was priced at $750 in UK last time I checked, which is a pretty high price for a model with a screen just a bit over 4 inches in diagonal.

The smartphone measures 9.5 mm in thickness, weighs 137 grams, so it’s not one of the thinnest or lightest phones out there. It’s actually quite bulky and often times it feels like a bigger iPhone of sorts. This is a bulky, but compact phone, one that keeps the same design as the Z1, but smaller. It has a glass back and front and it uses a waterproof and dust proof case. That’s signaled by the lids applied on top of its ports and slots. 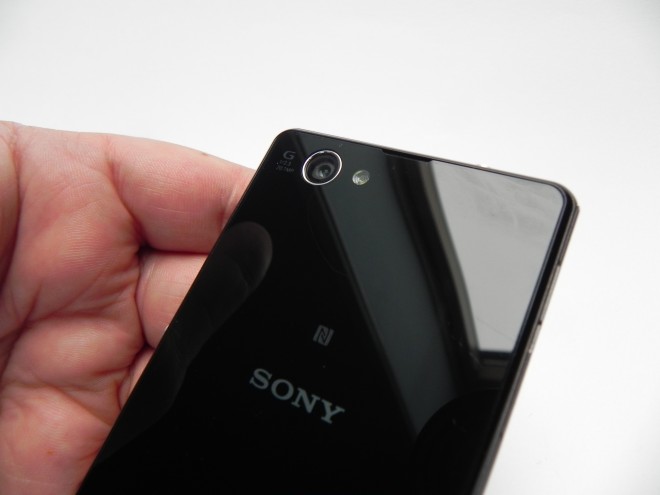 This model is actually less slippery than the Z1, simply because you can grasp it easily with your hand. It uses the same Omnibalance design as the last gen Xperias and relies on an aluminum frame to keep everything solid. The ports and slots are all on one side this time, while on the Z1, the microSIM was on the opposite side of the microSD and microUSB.

We’ve also got the docking pins on the same side as the ports and a speaker at the bottom, while up top there’s the audio jack. At the back there’s a camera and flash, while in the corner we’ve got a lanyard and upfront a camera. The buttons on the opposite side of the ports offer a weak feedback and the camera button is simply too small to be likable. This is a device that’s easy to use with one hand, so at least it has that advantage. Overall, the design is compact, but pretty unimpressive. 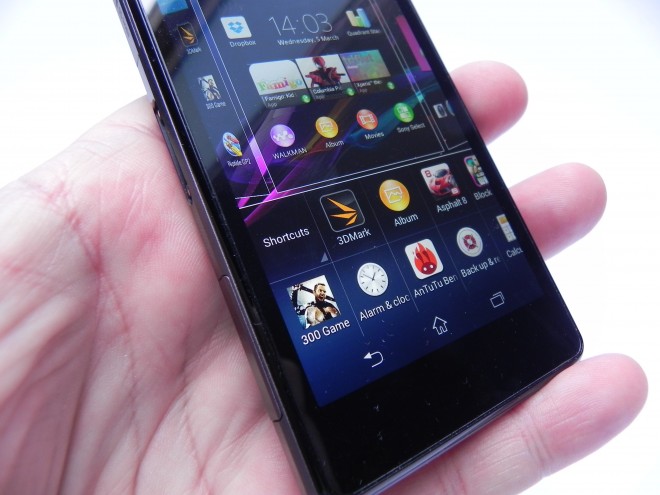 On the hardware side, we’ve got a 4.3 inch 720p display, this time an IPS LCD from what I’ve heard and not the poor TFTs of the Xperia Z1 and Z. The screen uses Triluminous and X Reality tech and the body of the phone is waterproof for up to 1 meter in depth and 30 minutes of sinking. Specs include a quad core Snapdragon 800 2.26 GHz processor, with Krait 400 cores, an Adreno 330 GPU and 2 GB of RAM. There’s also 16 GB of storage, a microSD card slot and at the back we’ve got a 20.7 megapixel camera with LED flash and Exmor RS sensor.

At the front there’s a 2 MP camera and on the connectivity side all the options are covered, from quad band GSM/GPRS/EDGE to LTE and DLNA and microUSB with MHL. We’ve also got NFC, FM Radio, an accelerometer, proximity sensor and active noise canceling. On the battery side, there’s a Li-Ion 2300 mAh unit, that on paper provides 18 hours of 3G talk time or 94 hours of music. In our test, that involves HD video playback with brightness at 50% and WiFi on, we achieved 8 hours and 53 minutes of playback, that’s actually very good for such a small phone. 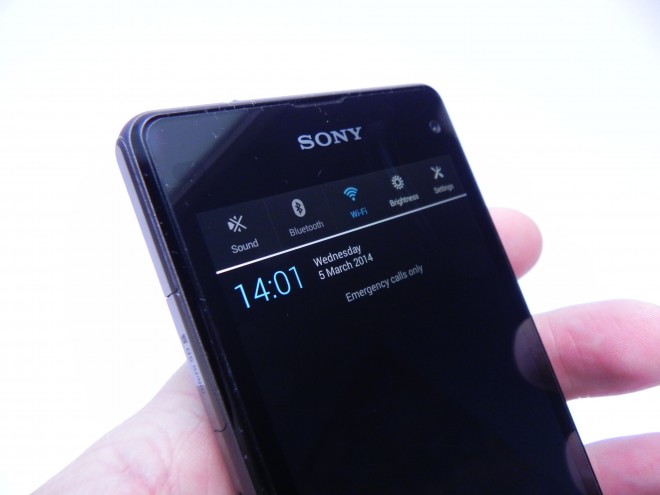 It’s even better than some high priced 5 inch devices out there. The Nexus 5 for example offers 4 or 5 hours of playback, which is a bummer. Overall, the Xperia Z1 Compact offers you about a day and a half of moderate use. It takes 2 hours and 20 minutes to charge its battery to the max level. So, the conclusion is that the battery is quite good. Now, on the audio side, there’s the famous Walkman player, with its interesting UI and options like Clear Audio+, for a sound that’s better suited for each song you play.

There’s also a ton of enhancements, that basically create a nifty equalizer here and options like X Loud will bump up the volume and quality of playback. Keep in mind that only the left side of the speaker is actually a speaker, that is easy to muffle when watching videos or playing games, in landscape mode. Sony included a SensMe system, that organizes music according to mood and back to the settings, there’s also a Dynamic Normalizer, that will make all the tunes uniform in volume. 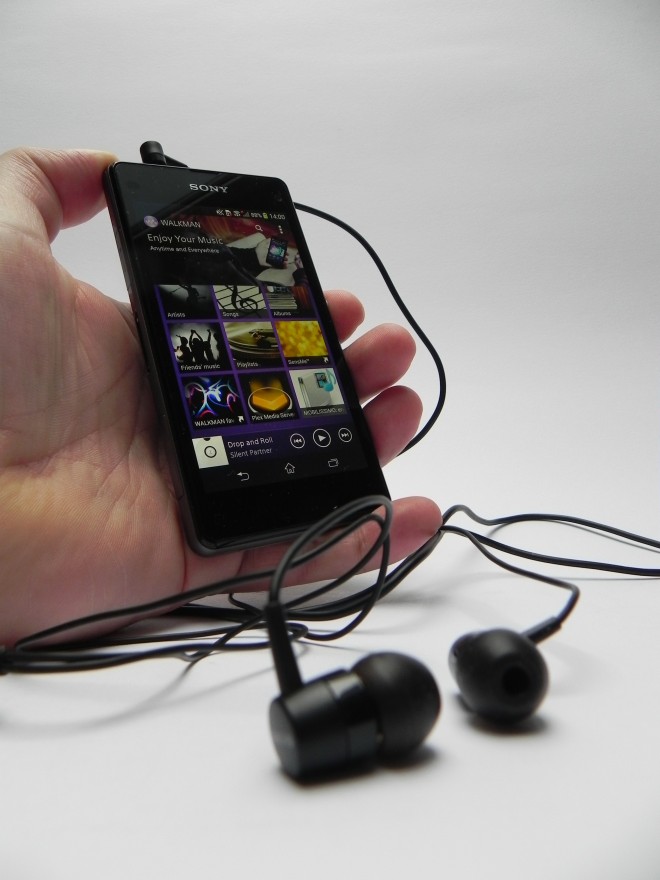 Now to the acoustic experience: the Z1 Compact offers a clear sound, with no distortion, but the volume could be higher. The bass is OK and the headphones are comfy, have good isolation, provide excellent volume and bass. Overall, the audio is slightly better than the one of the Xperia Z1. As far as the video/screen aspect goes, this is a great improvement compared to the Z1. So, this is a 4.3 inch Triluminous screen, with good view angles, X Reality engine technology, 720p resolution and good clarity. The blacks are deep and the contrast is good.

The pixels are of the RGB stripe kind and the screen achieved 488 lux units when analyzed with our luxmeter. This is actually a very good performance, even when compared to the champion, HTC One and its 500 lux. On black we got 2 lux, which is decent, especially compared to the Z1’s 11 lux. The white-ish hue of the Z1 is gone and the display is now excellent. We also have some special settings, like X Reality that enhances the quality, a glove mode to use the screen with gloves on and an option to set up the white balance. 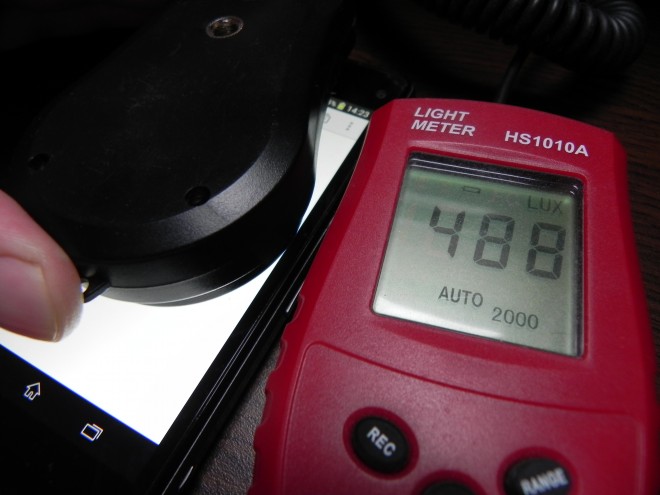 As far as the camera goes, this is a 20.7 megapixel shooter, that in theory is just as good as the one of the Xperia Z1. We’ve got an Exmor RS sensor available, BSI, no OIS and F/2.0 aperture. There’s a Sony G Lens with 27 mm width and a Sony BIONZ image processor. The camera UI has a high refresh rate, as shown in the video review below. The UI modes are also the same as the ones of the Z1, including the likes of Superior Auto, that selects the proper options and scenes to suit a situation and take an ideal shot.

There’s also manual capture, Info Eye, Timeshift Burst, panorama and picture effect. The manual option gives us a ton of settings to tweak, ranging from white balance to exposure, resolution, aspect ratio, ISO, focus mode, HDR, stabilization and such. If we analyze the pictures taken with this phone, on a very cloudy day, we find that the quality is slightly lower than the Z1 shots. They’re also below the Lumia 1520, if you really want a comparison with another 20 MP device. 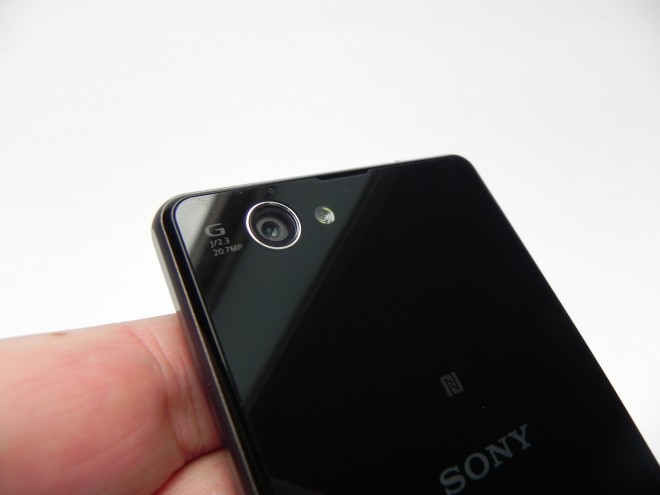 The colors are slightly oversaturated, HDR is very good and the level of detail is high. This 4.3 incher beats the Galaxy S4 and HTC One in the camera department, but its LED flash is not powerful enough to face dark areas. Low light shots are not that good and there’s a bit of noise that may bother you in such situations. There’s that “something” missing from the shots, a something you usually find on Lumia models nowadays. The video capture doesn’t include 4K capture and Full HD 60 FPS, although in theory the CPU could enable that. The stabilization is digital via the Steadyshot feature and on the downside, the loss of quality when zooming in is quite major. The zoom is also too sensitive and HDR video is available among the options.

The result of the video capture is a file with 17/18 Mbps bitrate, it offers stereo audio and as usual for higher end Android phones the continuous autofocus is a bit exaggerated. The video exposure is good and the HDR videos look excellent. Stabilization is not that good and I feel the need to compare the filming with the one of the Galaxy Note 3, with the latter winning this battle. 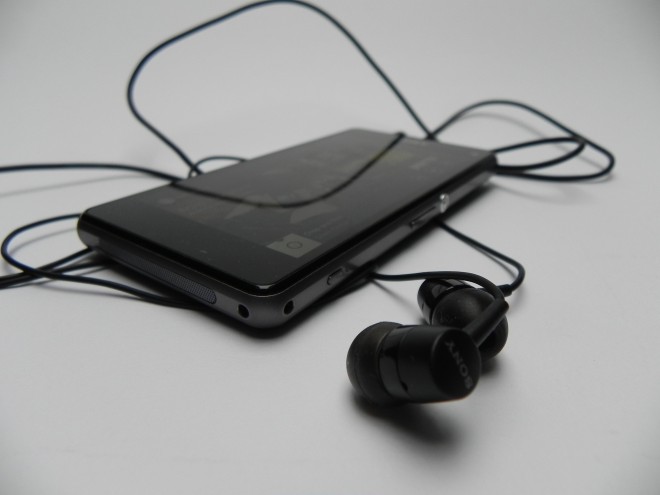 While the pictures beat the flagships of 2013, the videos don’t, sadly. Also, this camera is about 10% inferior compared to the Z1 camera. Sony Xperia Z1 Compact hits 41.8 degrees Celsius after 15 minutes of Riptide GP2 gaming, which is huge and means that the device gets very hot. The browser of choice here is Chrome and it’s pretty fast, as confirmed by benchmarks. The virtual keyboard is pretty cramped on the tiny screen, but somehow the keyboard of the iPhone manages to be more comfy on a smaller screen, so Sony fails here.

The Z1 Compact runs Android 4.3, with the usual unique widgets, themes, wallpapers and effects specific to a Sony model. The phone calling on this model is loud, the signal is good, but the squared design makes the device hard to hold for many dozens of minutes, since it cuts into your palm. In the multitask area at the bottom of the screen you’ll also find some floating apps and now we move on to performance analysis. 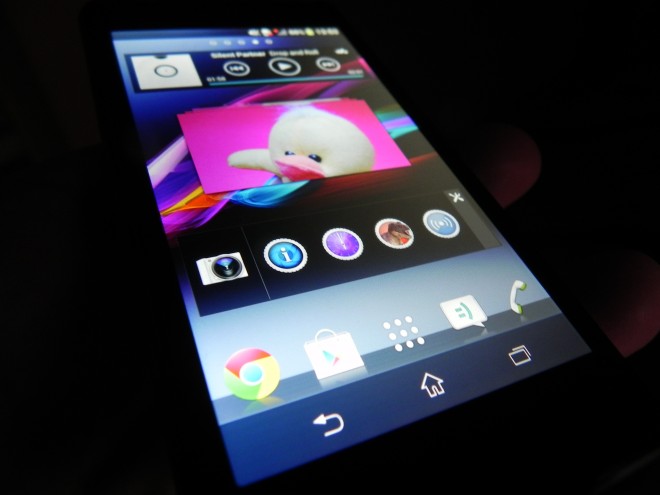 We did a benchmark comparison of the Z1 Compact with the Z1 and the LG G2. Sony Xperia Z1 Compact hits 21189 points in Quadrant, beating the Z1 and G2 by around 1000 points and 4000 points respectively. Meanwhile, in AnTuTu it gets 33893 points, below both rivals, but only by a few hundreds of points. In NenaMark 2 we achieved 59.4 FPS, below the Z1 with 0.5 FPS and over the G2 with 0.7 FPS. Finally, the device scores 2944 points in Vellamo, very close to the rivals, but above them and 19422 points in 3DMark, totally beating the Z1 and LG G2 by thousands of points. 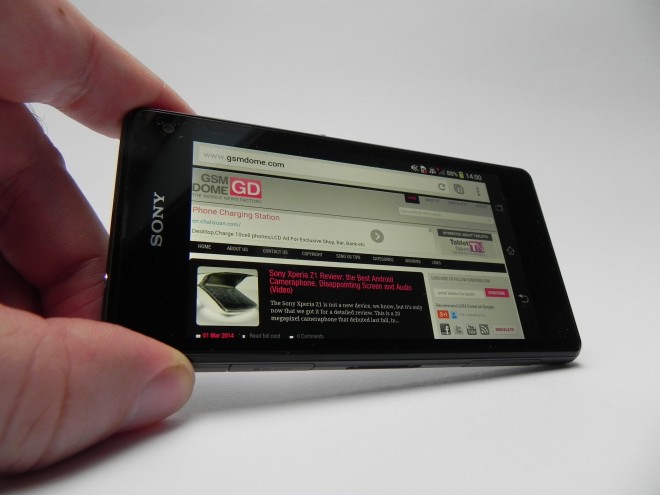 In BrowserMark 2.0 we achieved 2642 points, which is OK, but once again lower than the other models. This 4.3 inch smartphone shows that it can fight any big screen model of 2013 and even some from 2014, scoring very nicely in the benchmarks. I have to say that the preinstalled apps on this handset are too many and feel like bloatware. They include the usual, Album, Movies, Walkman, Sony Select (a sort of appstore), Social Life (a sort of Flipboard), Track ID, a Shazam precursor and Smart Connect. Then there’s Wise Pilot for navigation, Office Suite for productivity, Mcafee, Slide Me Market, Four Square, Evernote, Notes, File Manager, Sketch, Whatsapp and Pixlr Express.

Now let’s get to the Pros and Cons of this device!

We give this model an 8 for design, an 8.5 for OS and UI and an 8.7 out of 10 for hardware. The final grade is 8.4 out of 10 and this handset beats the Z1 in a few aspects, like grip, screen and battery. But everyone wants to go big nowadays…