Mobile ad firm Smaato recently published the results of a study, claiming that Symbian users from the United States are 2.7 times more likely to click on a mobile ad than those who use iPhone OS. The study is based on 6 billion ads, served by 40 ad companies in April. 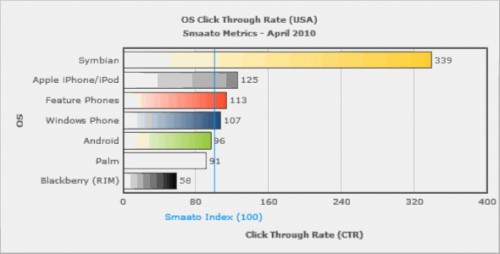 This is quite a strange finding, considering the tiny smartphone market share that Symbian devices hold in the US. GigaOm’s Kevin Tofel has a reasonable explanation for the statistics, as he notices that Symbian is now a more mature OS, because of its age, so developers and advertisers have had time to optimize ads for this platform.

iPhone OS is a young platform, only being around since 2007, so there’s a lot of customization and experimentation to do. This is where the Apple iAd service comes in, possibly playing a major role in increasing the iPhone’s importance in the mobile ad segment.