There’s no 100% confirmed release date for T-Mobile’s second Android phone and it turns out that even the G2 branding is under question right now. Although “T-Mobile G2” might seem like a logical choice, considering that the phone’s predecessor was named “T-Mobile G1”, it seems that HTC and T-Mobile have different plans. 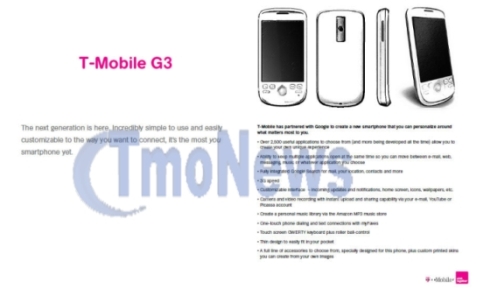 You might also know the device as HTC Magic, but this branding will be used with Vodafone only. A recent T-Mo News leak revealed the potential names of the new Android handset, so be prepared to have a good laugh: T-Mobile G3, T-Mobile myTouch 3G with Google, T-Mobile Genius 3G with Google and T-Mobile Prism 3G with Google.

Does T-Mobile consider HTC Magic the real G2 and its version an even more upgraded Android phone? Also, what’s the deal with the “Genius” and “Prism” brandings? Which of these names would you choose?