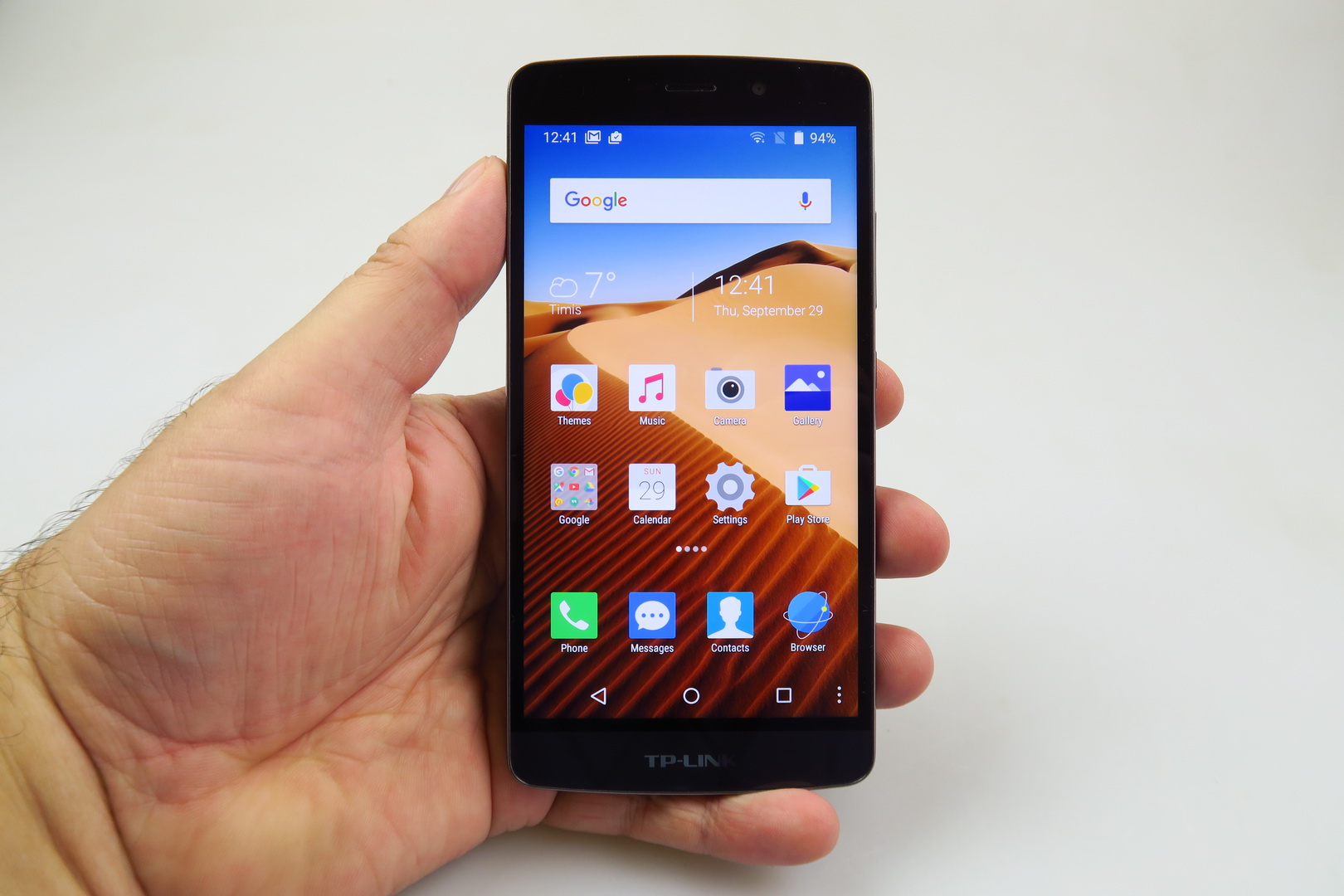 If you’ve been checking out our site, you probably know that we’ve been testing quite a few devices over the past year, including ones from the most varied brands you could imagine. TP-Link Neffos C5 Max is among them and it’s a midranger, that doesn’t break any records. It’s part of the first generation of TP-Link phones, that includes a trio of Neffos models. This one is priced at $227. 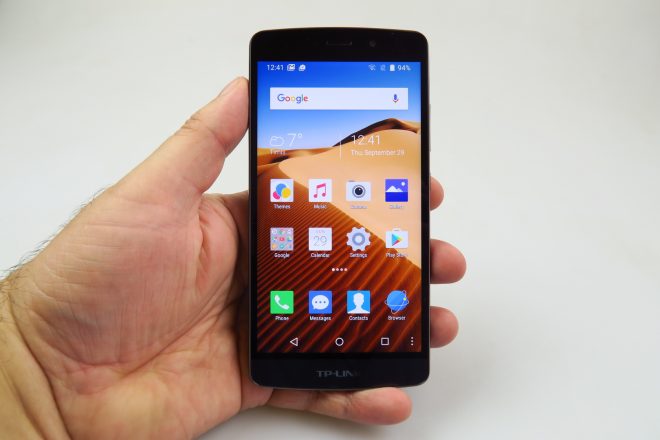 TP-Link was founded in 1996 and it’s the biggest router and network equipment maker. The company comes from China and the smartphone detailed here was launched in August. At first glance it’s very clear that it’s a LG G3 lookalike and it’s a midrange model by definition with an interesting UI. The case of the Neffos C5 Max is made of plastic and totally feels like an LG G3 when seen from the front.

The back reminds me of a lower end Lumia and we actually get a removable back cover here, that feels kind of flimsy. The battery is non removable and also in the same area we find the microSD card slot and the two SIM slots. The build is quite OK and I noticed a glitter pattern below the screen in the front logo area. The grip is good and the handset is available in pearl white or dark gray. 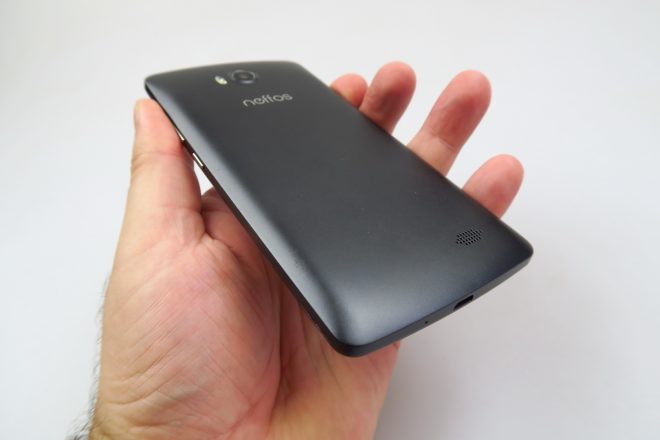 This is quite a long and wide phone for a 5.5 incher, so it’s not very easy to use with a single hand. It measures 8.95 mm in thickness and weighs 161 grams, plus it has comfy buttons with good feedback. In case you want a comparison, this device is 12 grams heavier than the LG G3 and it’s got pretty much the same waistline. There are no gimmicks here and there’s no 2.5D glass panel for example. Overall it’s nothing special design-wise and it’s a rather utilitary approach, with a pretty massive case.

Moving on to the display, we get a 5.5 inch IPS LCD Full HD panel, with a 1600:1 contrast and 178 degree view angles, as well as Gorilla Glass protection. The video player available here is minimalistic and offers options like Pop Up Play. The screen has OK brightness, but poor contrast, as well as wide view angles. I noticed that the image feels a bit too white for my liking, while the colors are pretty OK calibrated. The black is not deep at all. 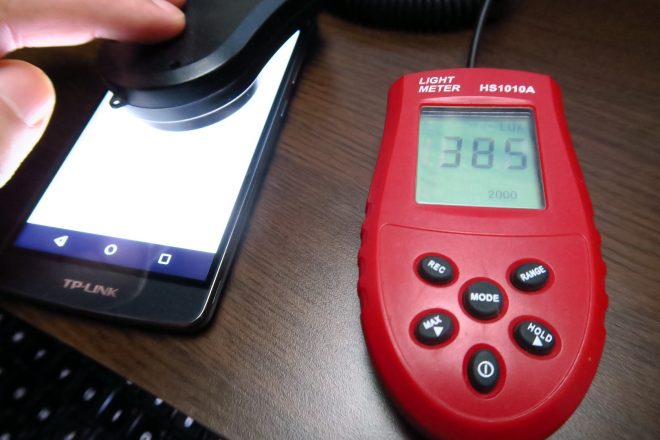 Pixels have an RGB Stripes setup and then we did the luxmeter test and reached 398 LUX at the top of the screen, 385 LUX in the middle portion and 369 LUX at the bottom. You can’t tell the difference in day to day usage. This level of brightness surpasses the ASUS ZenFone 2 Deluxe and LG G5, but scores below the LG Nexus 5X and UMi Max.

Settings are the usual Adaptive Brightness, Rotate, Sleep and font size. The performance is reasonable for the price. On the CPU front we’ve got an octa core MediaTek MT6753 processor, with cortex A53 cores, clocked at 1.3 GHz. The GPU is a Mali T720 MP3 and we’ve also got 2 GB of RAM and 16 GB of storage, plus microSD card slot. The device doesn’t suffer from lag, has a fluid UI and the apps start up in a pretty snappy fashion. 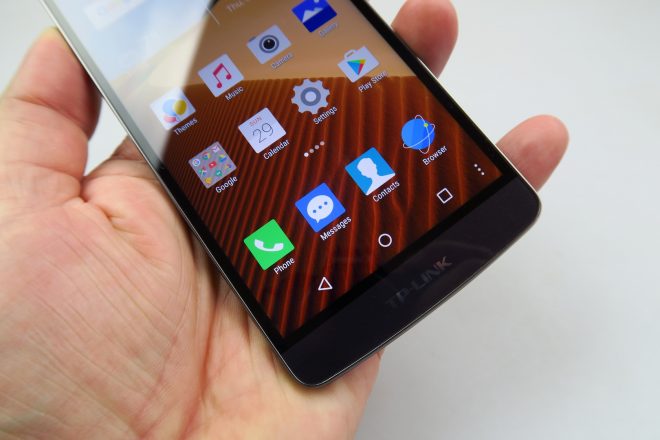 Games like Riptide GP Renegade run OK, without lag and without frame loss or glitches. Surprisingly there was some lag in the menu of games, like Vertigo Racing for example. In benchmarks, such as Quadrant, we surpassed the HTC One A9, as well as Huawei G8, while in AnTuTu 6 we went past Huawei Honor 5X and Galaxy A7 (2016). The GPU tests were kind of low in all benchmarks, which was expected here. 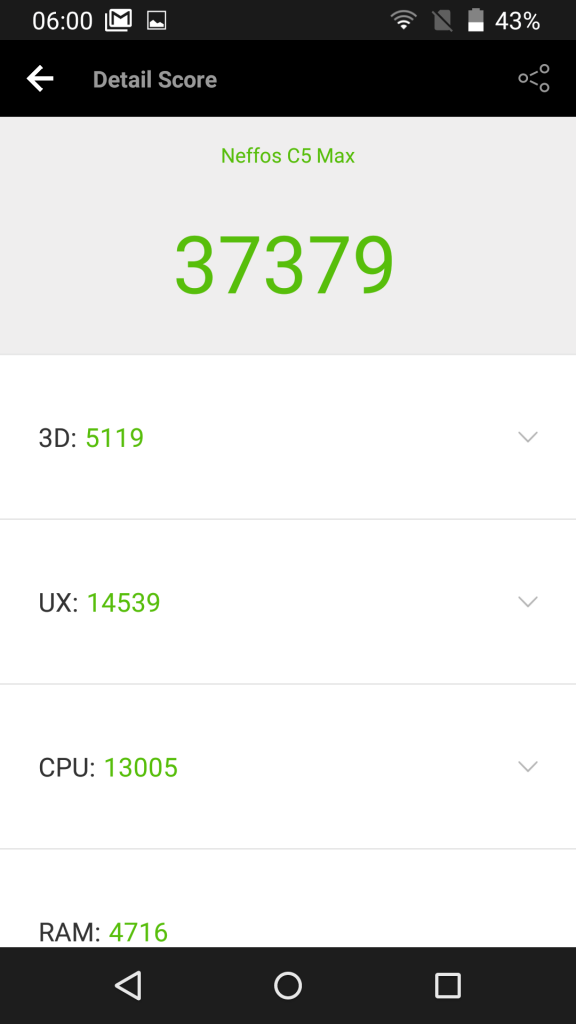 It behaves like a normal affordable Chinese handset in the end. We also did a temperature test and achieved 35.2 degrees Celsius after running GFXBench and 36.1 degrees after running Riptide GP Renegade, so there’s no overheating here. The battery inside the phone is a 3045 mAh Li-Ion unit, that achieves 8 hours and 1 minute in our HD video playback test, rather average I’d say. 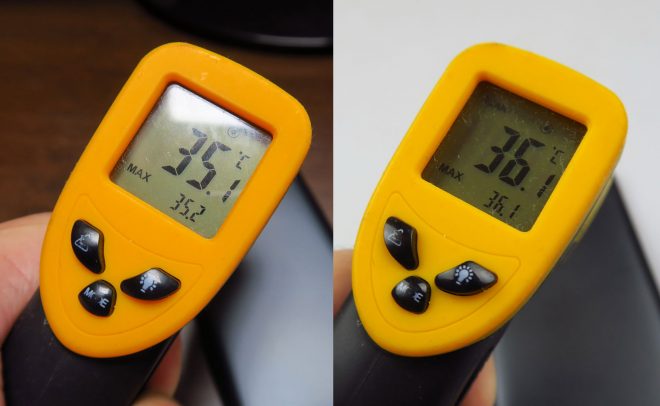 It manages to beat the OnePlus and Huawei P9 Lite, but it pales in comparison with the Vernee Thor and LG AKA. In PCMark we achieved 6 hours and 52 minutes, which is rather OK and superior to the Nexus 6P and Huawei P9 Plite, but inferior to the Vernee Thor and BlackView Ultra Plus. Charging is done in 2 hurs and 18 minutes, faster than the Xperia X Compact, but slower than the LG AKA. 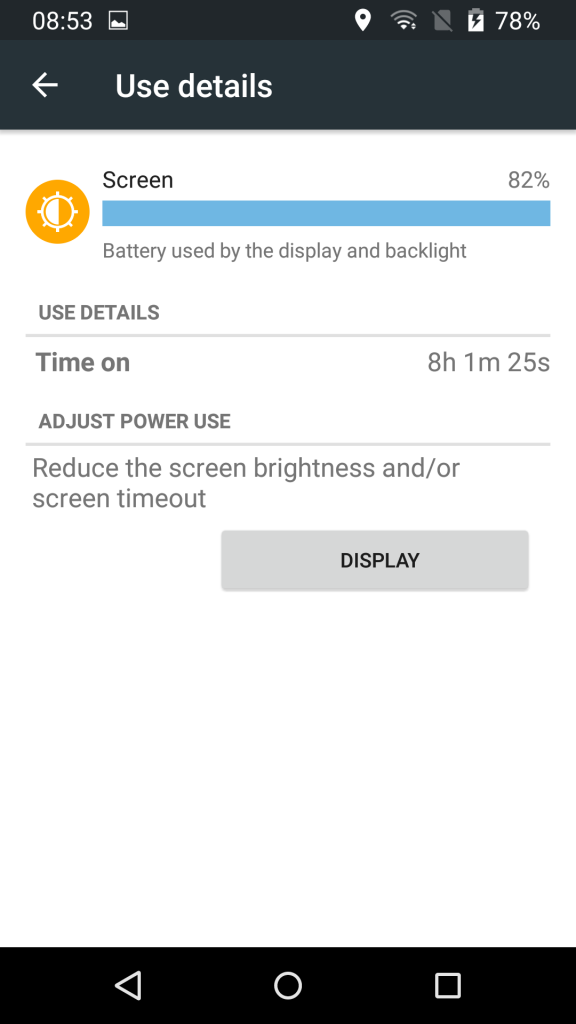 Settings for the battery include Standby Intelligent Power Saving and the typical Battery Saver. In the end this is just another average midrange battery, that breaks no records, but it does its job well. Acoustics are up next, with a player that handles MP3, OGG, FLAC and WAV files. There’s no special acoustic tech here, no Dolby, DTS or any kind of gimmick. The audio experience brought us a very weak bass and the sound didn’t seem to have any “weight”. Keys and guitar are well rendered and the volume was pretty high. I was also happy to see there was no big distortion here. 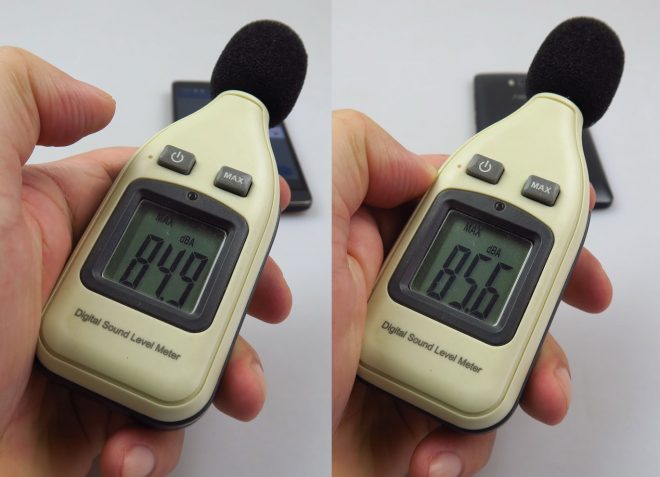 At least there was no big muffling on a flat surface. We then proceeded to do a decibelmeter test, achieving 84.9 dBA at the front and 85.6 dBA at the back. This is quite loud and pretty much on par with the Galaxy Note 4, so not bad. It also surpasses the Galaxy S7, in loudness. The headphones remind me a lot of the iPhone 3GS ones, they’re made of plastic and have a wire that tangles easily. 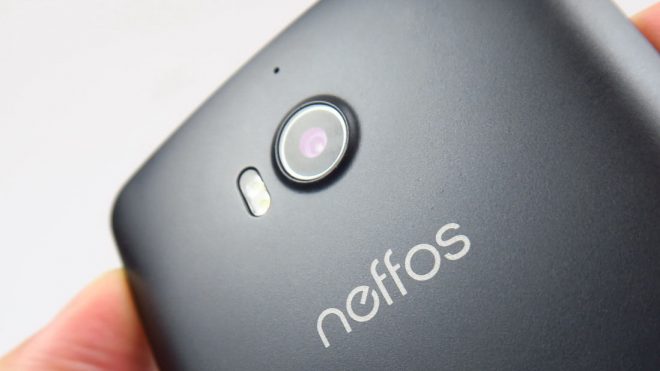 The main cam has F/2.0 aperture, dual LED flash, while the front cam offers an 85 degree wide angle lens. The camera starts up pretty slowly, has an OK focus sped, fluid zoom and slow picture taking. The UI of the cam is pretty original, as far as organization and iconography goes. With a swipe up you’ll trigger the time, time stamp, smile/gesture capture, force focus and also tweak the resolution.

Capture Modes are as follows: Normal, Food, HDR, Intelligent, Scenery, Beauty, Panorama. There are also many sub-options for all those modes, basically filters/effects. We started off the camera test with an indoor gallery, where we found that it was rather hard to focus on the hamburgers we photographed, not because of the cravings, but rather the camera itself didn’t focus properly in closeups. 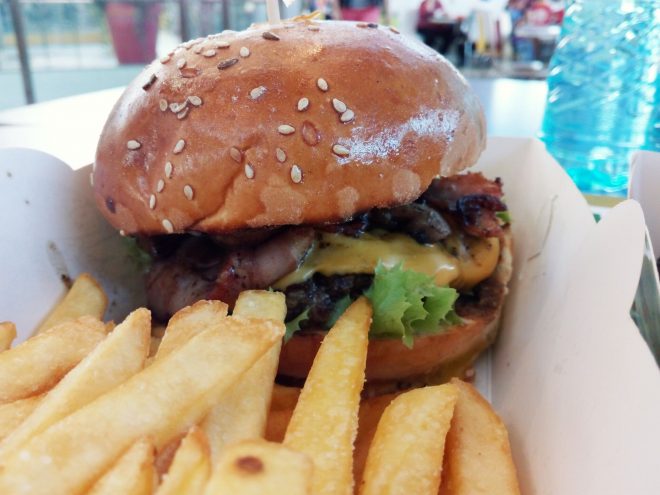 When we did manage to focus, the results were rather solid. Zooming in produce solid results only at zoom level one, but more a deeper zoom only produced blur and grain. The HDR was good and selfies were rather OK, both as far as texture and colors are concerned. There’s a bit of focus and brightness problem here and there, but nothing deal breaking.

Now we’re talking about shots taken outside, that had OK details, including in landscape shots. We also pulled off some nice flower closeups and when zooming into that colorful flag, results were rather good. There’s a strange exposure here and there and some blurry shots, but once again those patient enough to focus will get rid of problems. 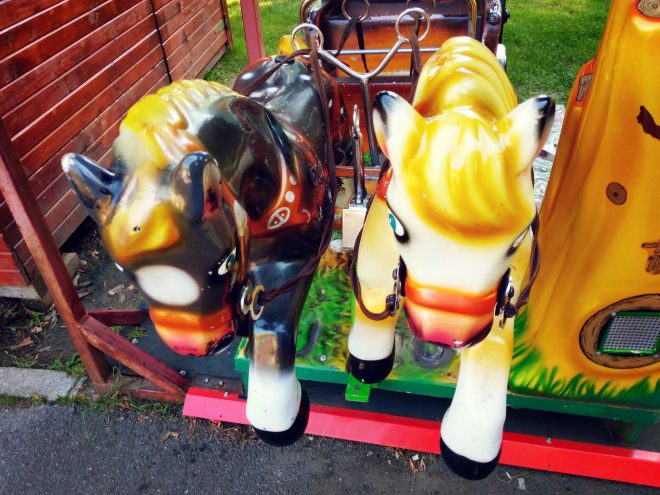 Those colorful toys we photographed came out OK, texture-wise and color wise and moving on to the Panorama, it had a very modest resolution of 2856 x 568 pixels and it was also slightly burnt. Backgrounds of shots had some dynamic range problems and basically aside from the selfies and some closeups, you can forget about the cameras.

I’d place their quality in a lower division than the Vernee Thor for example, but they’re superior to what the UMi Max offered us. Low light capture brought us only dark shots, also blurry, plus bit street light halos and some ghosting effect to spoil the day. Everything was pale and morphed, but the texture of monuments and buildings was… decent. 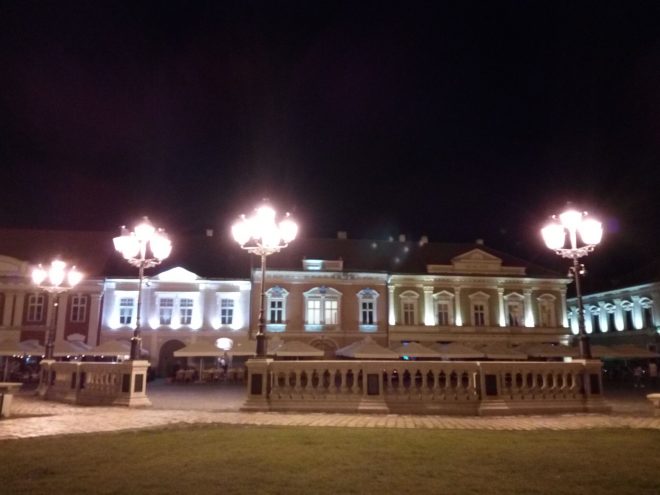 The flash was OK, but it made everything too white, plus there was a mauve tint on most pictures, for no reason. Nothing to write home about, overall. Videos were shot in 3GPP format, in Full HD, at 30 FPS and with a 17 Mbps bitrate. The video captures were shaky, there was a bit of refocusing, plus detail loss when zooming in. Clarity was OK and just like the pictures, we also met with some exposure problems here.

Colors are realistic and the microphone was OK, actually more than OK, it was great somehow. Stabilization (digital) was poor and lots of refocus spoiled the fun. Aside from colors and microphone, there’s nothing good here. Low light video capture was done in 16 FPS, at 9 Mbps, it was shaky and the zoom was pretty show. Street light halos were big and the videos were foggy and very, very shaky.

Now we’re done with the camera, so let’s discuss other aspects. The preinstalled web browser has an OK speed, but poor benchmarks, while the stock keyboard is reasonably comfy. On the connectivity side of things, we’ve got LTE Category 4, with up to 150 Mbps download speed, plus HSPA+, and keep in mind that we only get FDD LTE here. 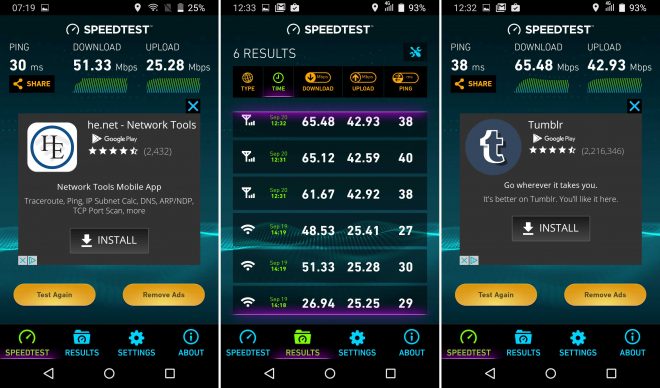 There’s GPS and Glonass, as well as WiFi b/g/n, Bluetooth 4.0 and this is a dual SIM dual standby machine with micro SIM slots. The dialer provides functions like Speed Dial and the calls are loud and clear, plus we’ve got a dual noise reduction microphone. Speedtest was also used here, and we expected huge results, since this is a handset made by a router maker after all. 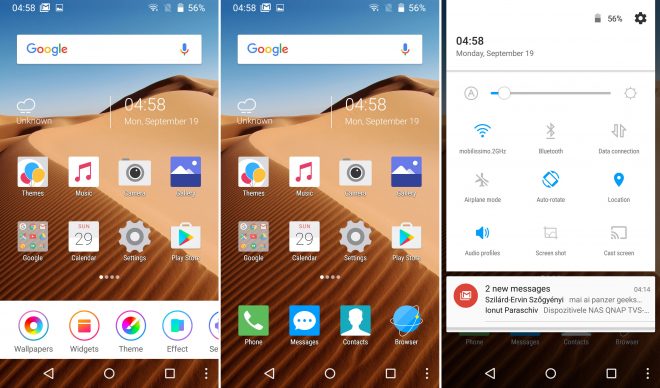 Multitasking relies on a carousel and a cleaner and interestingly we also get a fourth virtual button at the bottom of the screen, that triggers the wallpapers, widgets and themes area, plus effects and settings. Widgets are stock ones and we also get online themes and the option to auto group apps, which can be useful if you have a lot installed.

The dropdown bit of the UI features quick settings with a new hue and notifications. There’s also a screenshot function in the same area, including a scrolling screenshot. The Settings offer the usual options, with no gimmicks, no fingerprint scanner, no gestures, nothing. Turbo download (4G+WiFi) is the only atypical function here (more or less). 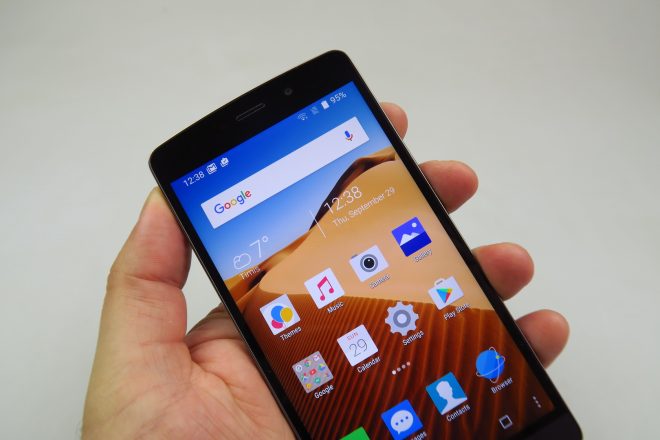 The preinstalled apps list includes 41 apps, which is pretty close to the definition of bloatware. All apps are on the homescreen, so here’s no app drawer here. The most useful ones are System Management, Notes, Mail and Photo Editor.

And now it’s time for the verdict!

TP-Link Neffos C5 Max is a midranger by definition, one that doesn’t break records, but it also doesn’t descend into the abyss of failure. Performance is decent, selfies are OK, the screen does its job and the acoustics are quite good. This is a phone OK for games, music playback, selfies and pictures. TP-Link kind of spoils its name with the WiFi performance of this device, but it has the advantage of being one of the best known Chinese brands, so the public may opt for its devices.

Only a price drop will propel them into the “offer you can’t refuse turf”. Till then you can pass on it. Or buy it from here.