As you know, Symbian is not called Symbian any more, it’s just Nokia OS Anna or Belle. One of the phones we tested last year with this OS was Nokia 808 Pureview, with that famous camera it has on board. The handset was also a good opportunity to test an app like the Tweetian one shown below, one of the last major Twitter clients on Symbian. 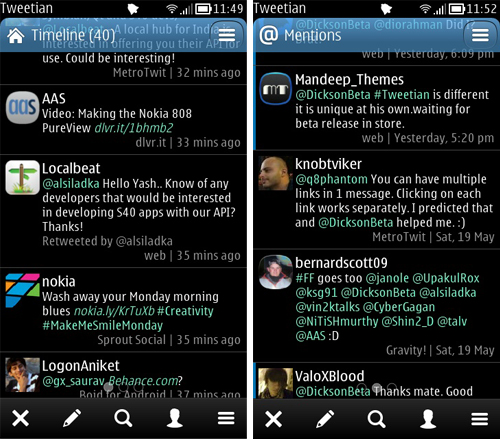 Tweetian runs on Symbian Anna and Belle devices and apparently it’s a Twitter client written for Symbian in Qt/QML. The interface combines the classic Twitter UI with the one of the Nokia Belle, so it’s quite original. The blue bar at the top, plus the 5 buttons at the bottom are all Belle, if you ask me. Tweetian is based on a simple interface and it’s very fast with updates to your info stream. The settings area allows you to activate options such as loading image thumbnails, including hashtags in replies, change update frequencies and lets you know about the API rate limit.

The timeline is displayed with a black background, which is a nice feat, since we all know that handsets with AMOLED screens consume less power on a black background. You can geotag tweets and the nice aspect about the app is that when it updates your timeline it won’t jump to the latest tweet, but just stick with your current one. You can navigate between views with a simple swipe, between replies, timeline and direct messages. The app is very cool and it’s well worth a 9 out of 10. You can get it from here