comScore statistics are a good way to see which phone manufacturer is selling the most goods and in February it seems that the Verizon iPhone was the most acquired model. The data we have on the handsets comes from the comScore MobiLens service, reporting key trends in the telecom biz, based on a 3 month average. 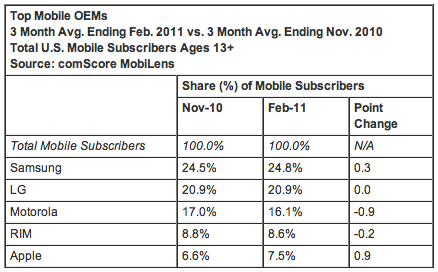 30,000 US mobile clients were surveyed, with Samsung proving to be the top handset manufacturer, with 24.8% market share. Android is the leader platform-wise, with 33% of the market share. Over the past 3 months, Apple grew in market share, going from 6.6% to 7.5%, says the same survey. Continuing with the details, it turns out that 69.5 million US folks owned smartphones in the 3 months time frame ending in February 2011.

This is a 13% increase from the previous trimester survey. Android grew 7% since November, to 33% now while RIM reached 28.9% and Apple got 25.2% of the market. Microsoft gets 7.7%, but recent studies show that it may become the second most popular OS after Android till 2015. 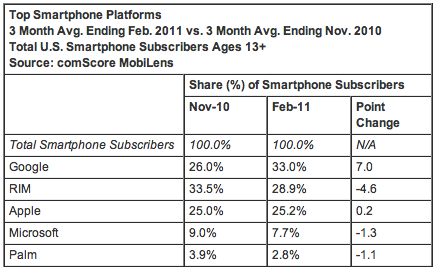