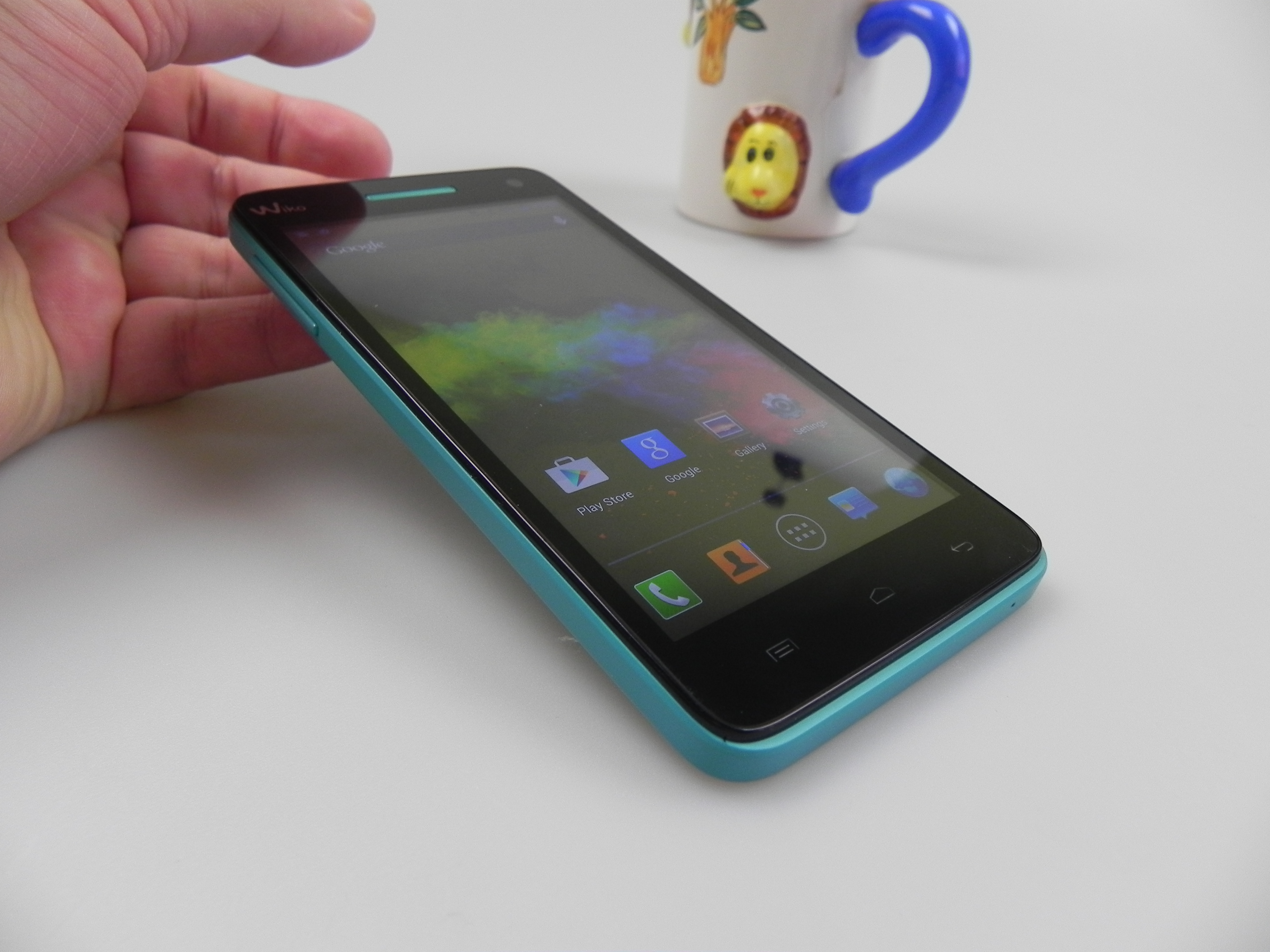 Who doesn’t want an affordable and colourful phone as a youngster? Wiko is a French company that was founded a few years ago in Marseille and they have a parent company in China. This firm focuses on handsets for the young customers, with colourful cases, Android and midrange specs on board. Such a model is the Wiko Rainbow, that we reviewed below. 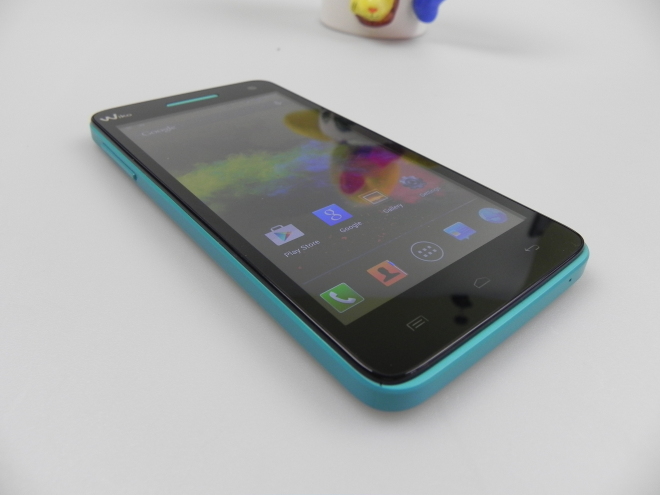 The device is priced at 150 euros and it’s a colourful handset launched this Spring. Its design involves a case that comes in 7 color versions: white, coral, purple, black, fuchsia, turquoise and yellow. The case is made of plastic and it’s not slippery. Grip is good and we’ve got an interchangeable back cover, in case you feel like tackling a new look. This model measures 9.3 mm in thickness, weighs 167 grams and sits well in the user’s hand, but it’s quite massive for a 5 inch phone.

It’s hard to use with one hand alone and moving on to the overall design, we get an earpiece at the front, where there’s also the LED for notifications integrated within it, a front camera, sensors and capacitive buttons. At the back there’s the main camera, LED flash and speaker and once you remove the cover (happens easily), you’ll see that this one is a wraparound cover like the ones of the midrange Lumias. 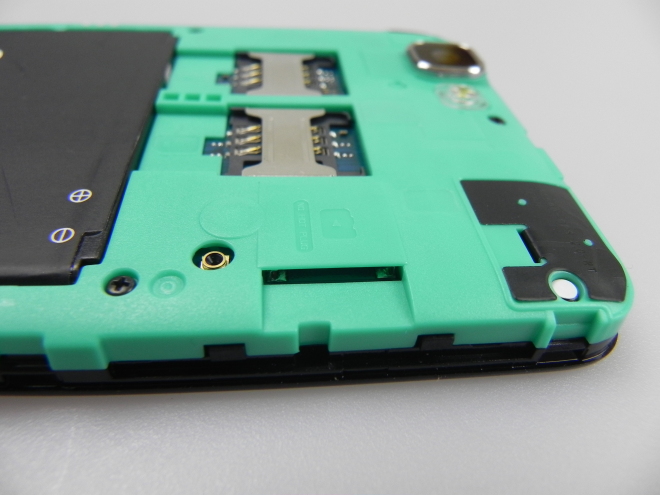 Below the cover there are two SIM slots, a microSD card slot and a removable battery. At the top we find the audio jack, microUSB port, while at the bottom there’s the microphone and on the right we find the On/Off button. On the left there are the volume buttons and this device has a solid design, but rather a bulky one. It’s still pretty playful and youthful. Now as far as the specs go, Wiko Rainbow comes with a 5 inch UPS display, with a 1280 x 720 pixel resolution and 16 million colors shown. Inside we’ve got a quad core Cortex A7 processor, a MediaTek MT6582 clocked at 1.3 GHz.

Other features include a Mali 400 MP GPU, 1 GB of RAM, 4 GB of ROM and a microSD card slot, with support for up to 32 GB extra. There’s an 8 megapixel back camera and a front 2 MP shooter. On the connectivity side there’s a dual SIM slot, WiFi Direct, DLNA, Bluetooth 4.0, HSDPA (up to 21 Mbps download speed), GPS, Glonass and FM radio. Other features include an accelerometer, proximity sensor, brightness sensor and compass. 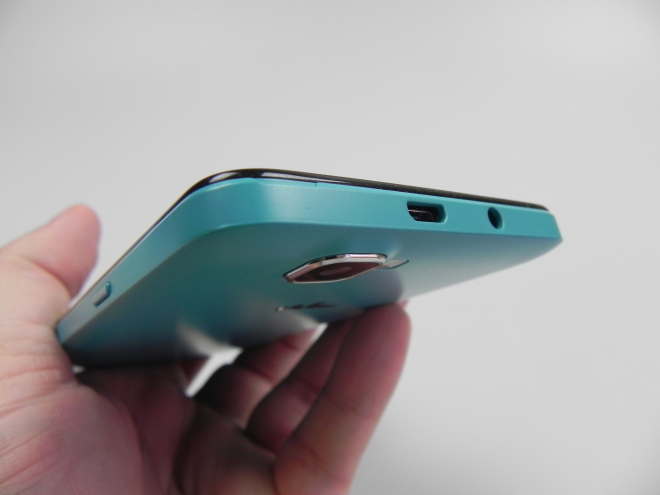 The battery is a 2000 mAh Li-Polymer unit, that on paper offers up to 260 hours of standby functioning, or up to 16 hours of talk time. In our test, that involves a video loop with WiFi on and brightness at 50%, we achieved 3 hours and 17 minutes of playback, which is kind of disappointing. The charge time is 1 hour and 50 minutes, which is OK. There’s no power saving features and overall the battery is underwhelming.

As far as acoustics are concerned, the music player here is very simply and only slightly tweaked from the stock one. There’s a stock equalizer and during the playback, volume is high, bass is OK and the sound is clear. There’s no muffling on flat surfaces and the volume is pretty much OK. Guitar and high notes sound pretty well. Headphones are big and uncomfortable, plus they have a big remote with a single button and the wire kind of tangles. The headphones are loud, but they could be louder. However, at least sound is clear and the bass is OK. 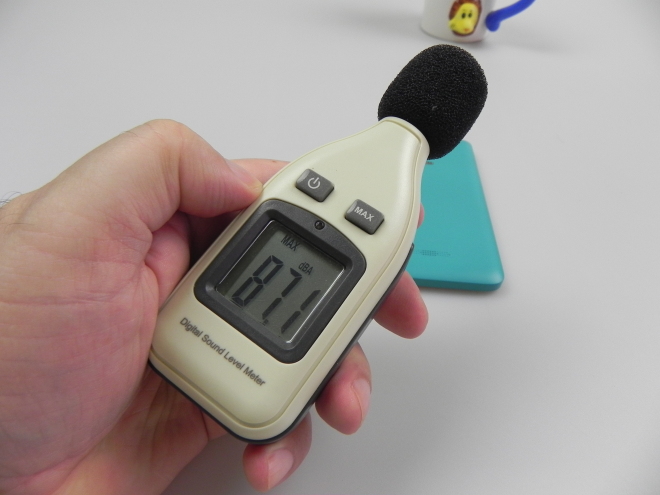 FM radio is offered via a stock app and it includes features like Record and Speaker. We used a decibelmeter on this device and reached 87.1 dBA at the back, or 85.2 dBA at the front. The iPhone 6 meanwhile reaches 85.2 dBA so I’d say we’re doing fine, especially considering that the LG G3 also reaches 87 dBA. There’s also a BES audio enhance option in the Settings area.

The display is a 5 inch IPS HD affair, with 294 ppi density, while the video player includes an option much like Samsung’s Pop Up Play. The screen is crisp and clear, offers good contrast and wide view angles. It’s bright, offers accurate colors, while the pixels are of the RGB Stripe kind. The LUX level is 424 LUX on white, which is very good for the price. We even beat the Xperia Z2 flagship and its 366 LUX, as well as the LG G3 and its 343 LUX, plus the LG G2 and its 350 LUX. 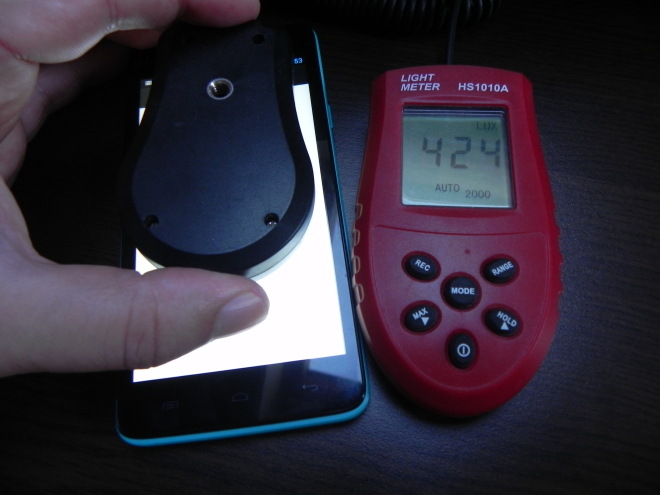 Overall, I’d say the display is good and there are no objections about it. The back camera is an 8 MP unit with LED flash, BSI, 4X digital zoom and the smartphone also brings a front 2 MP shooter, but the camera’s UI feels a bit too old and simple. On the left side of the screen there’s a front camera shortcut, flash and cinemagraph option, as well as Eraser. The Shot option includes sub options like Normal, HDR, Panorama, Scene Detect and Smile.

The settings include a Zero Shutter Delay option, Face Detection, Self Timer, Continuous Shot and Picture Size (8 MP or 5 MP). The preview offers options like full screen or 4:3 and ISO goes up to 1600. On the right side of the UI there’s the shutter and video buttons. Video mode options include EIS, mic, audio mode, time lapse and quality (fine or high work OK). Once you start capturing, you’ll see that the focus is slow and so is the capture. 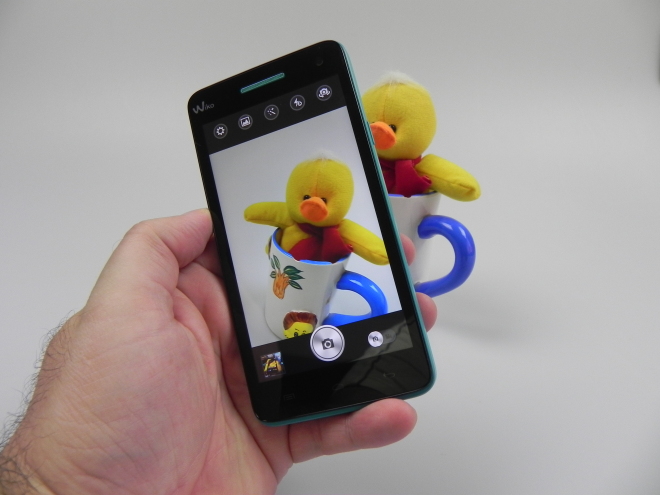 Moving on to the gallery, the zero shutter delay actually works and the HDR is slightly exaggerated. The Panorama looks nice, we’ve got good colors generally and decent level of details. The flash is good and the level of details is decent for the price of the handset. Images are bright and crisp, but also slightly dark in low light situations. Overall, the experience is OK, in both exposure and brightness. The video is taken in 3GP sadly, which brings low bitrate, but the acoustics are surprisingly OK. The video capture is not very crisp and colors are cold.

Focus is OK and the brightness is also good for sunset scenery. I liked the fact that during filming the camera doesn’t brutally alter exposure like some handsets out there do. Overall, I’d say that the camera is good considering the price of the phone. This model is able to achieve a temperature of 44.1 degrees Celsius, after 15 minutes of game play, so it tends to overheat a bit. The web browser is fast and the keyboard is comfy, especially since there’s also TouchPal preinstalled. 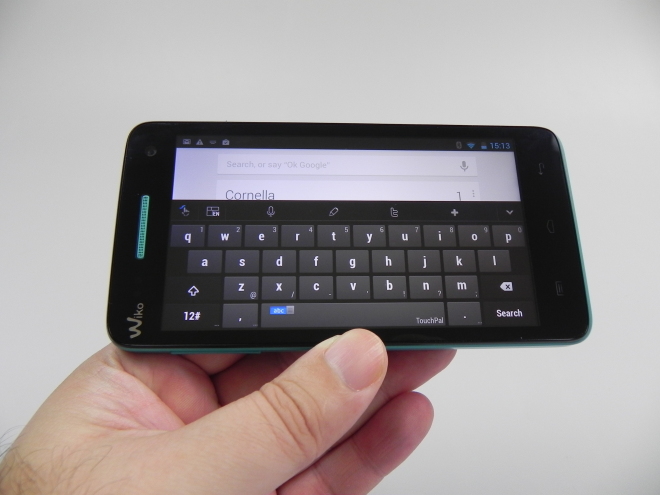 You can swipe between letters to compose words and there are also varied settings and skins in the mix. The phone calling aspect of the handset brings good voice, good clarity and crisp sound, plus OK signal. And now let’s see some benchmarks:

We compared 4 handsets with Cortex A7 processors and close prices and the Wiko Rainbow only won 3-4 out of 10 battles. It’s very close to the rivals and runs Riptide GP2 with no hassle. There’s no lag in the UI and the OS here is Android 4.2.2. The UI is pretty much stock and the widgets are also stock. The multitasking is triggered with the Home button pressed and with swipes you can close the apps. 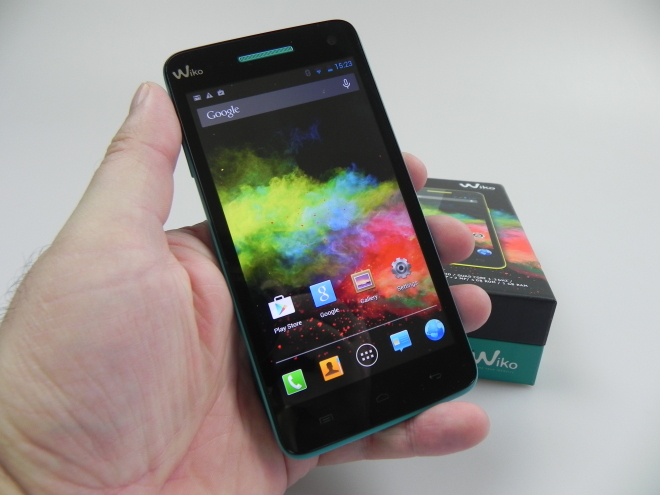 Now let’s see the Pros and Cons of this model!

Wiko Rainbow gets from us an 8.5 out of 10 for design, an 8.8 for hardware and a 9 for OS and UI. The final grade is 8.76 out of 10 and this would jump to a 9, if the price dropped a bit and Android went up to KitKat. This is a good phone for students and youngsters in the end.