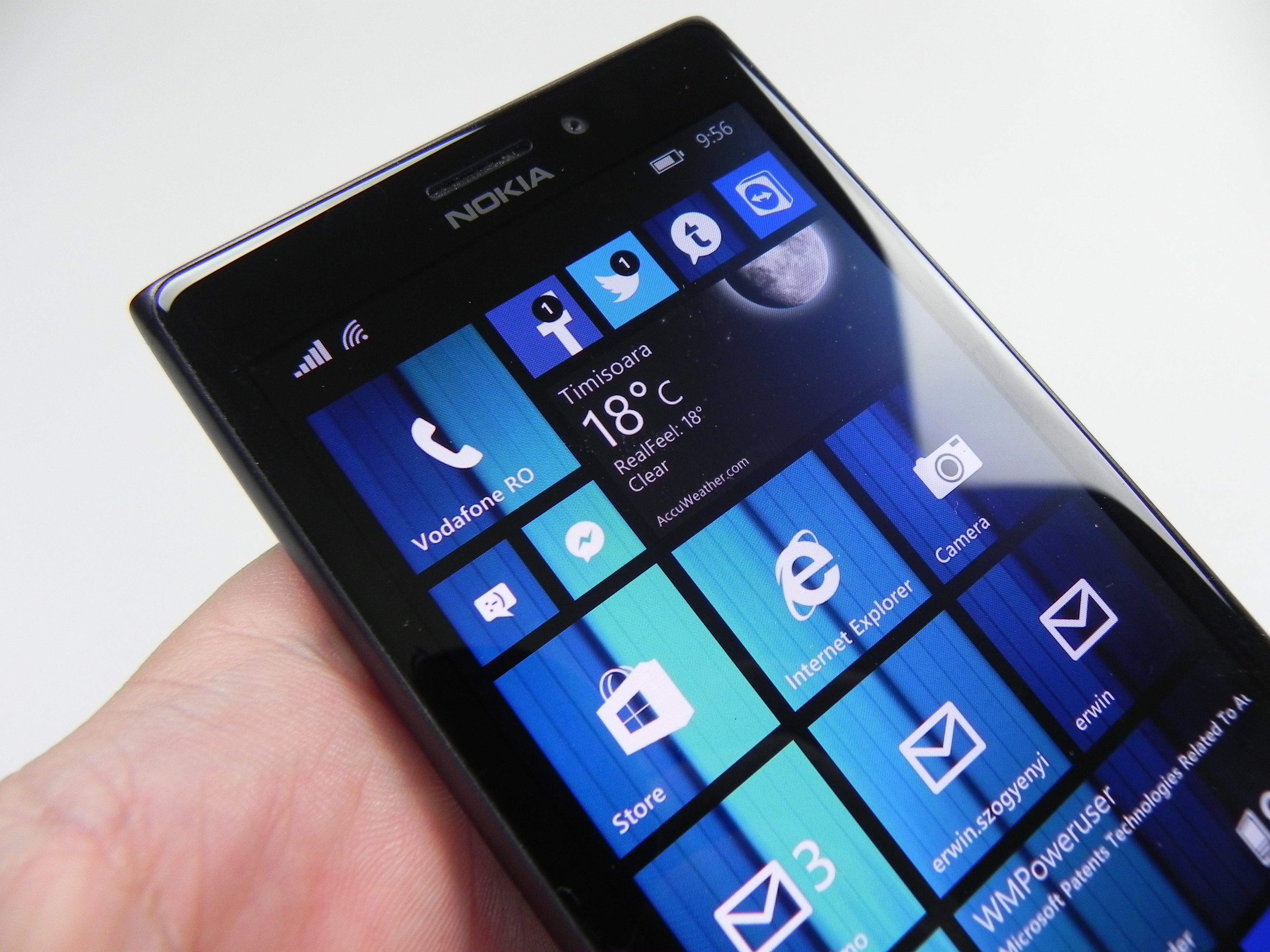 As you know Windows Phone 8.1 is basically rolling out in a matter of weeks, if not days, depending on the Lumia device you’re using. In the meantime we’ve gotten comfy with the platform, testing it on the Nokia Lumia 925, in the OS’s preview version. Announced at BUILD 2014, WP 8.1 is a major update for WP 8, pretty much like Mango was for WP 7, if not bigger. 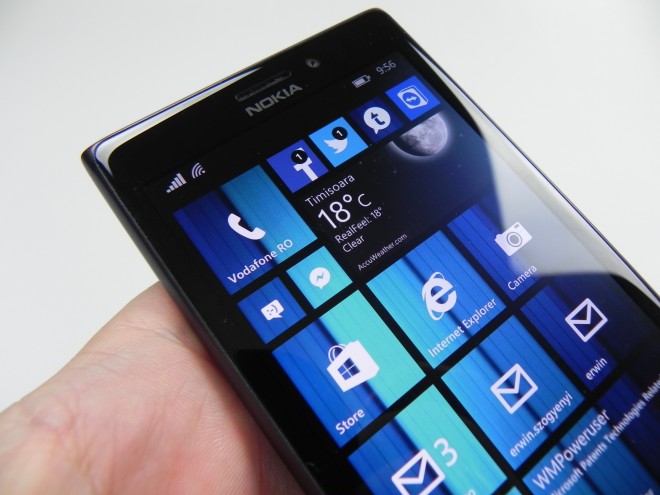 One of the first features that this mature OS brings is the Action Center, that finally integrates a notification area within the WP experience after 4 years of existence. We’ve got 4 tiles/shortcuts at the top of this area, all of them customizable. Those include toggles/shortcuts for brightness, Bluetooth, rotation lock, WiFi, Airplane Mode and even a camera shortcut. The status bar on top also shows extra details when the Action Center is triggered, like the date and the battery percentage. 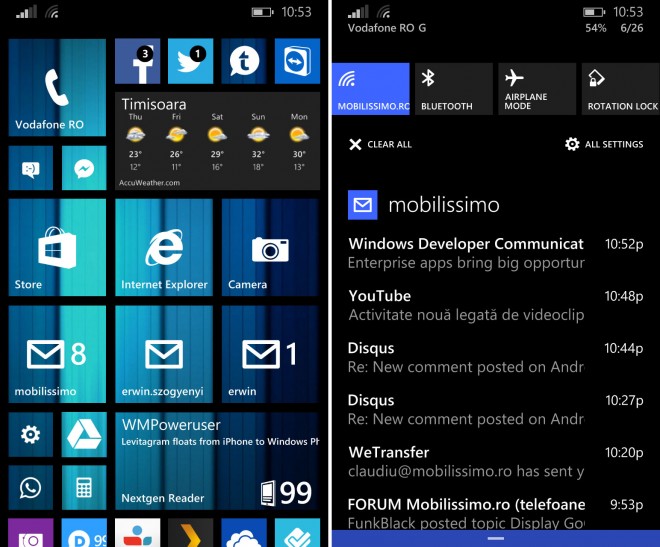 There’s also a shortcut included for the Settings area and obviously notifications are shown. You can tap them to enter them or swipe them to clear them. You can customize the Action Center shortcuts from the Settings area and by the way the notification segment can be triggered from the lockscreen, if you want. The keyboard has also been slightly altered, featuring a Word Flow technology now, that allows you to input letters and words faster via a Swype-style mechanism. 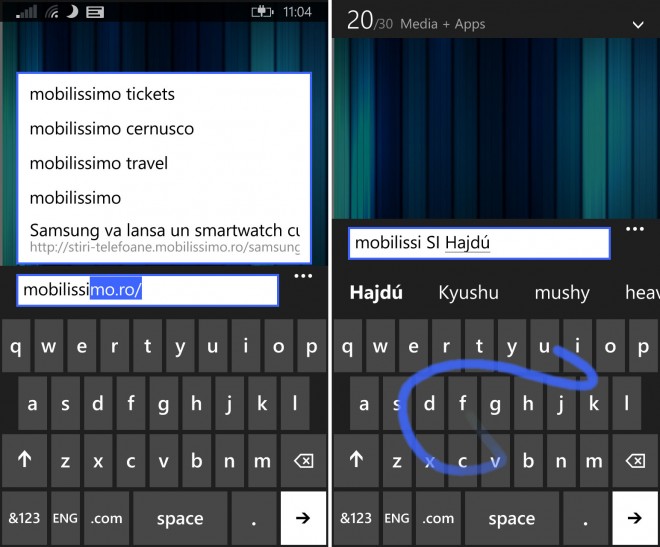 You draw between each letter and this system is both useful and fast. There are also changes in the hardware support area, with WP 8.1 offering now support for dual SIM, virtual keys, more Qualcomm CPUs and no longer requiring physical camera keys. You ca now save apps on the SD card and the apps are encrypted, so you can’t copy them to other devices. Users can choose the wallpaper for the Start screen, that will be seen with a beautiful effect through the transparent tiles. 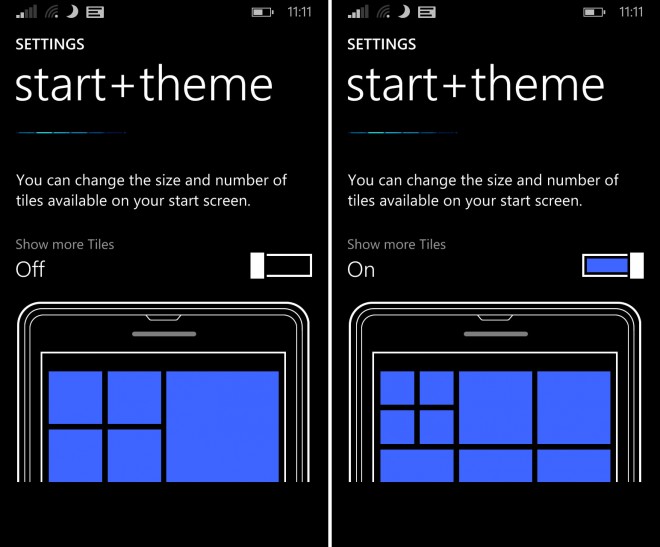 There’s also a Show More Tiles option, that shows an extra row of tiles even on a smaller devices, like you get on the bigger models. Another change has been performed to the Battery Saver area, that allows you to see which apps drain the battery most and allow them to run in the background or not. The Calendar has been updated with a Weekly view and a new monthly view, with items listed as lines (colored ones). 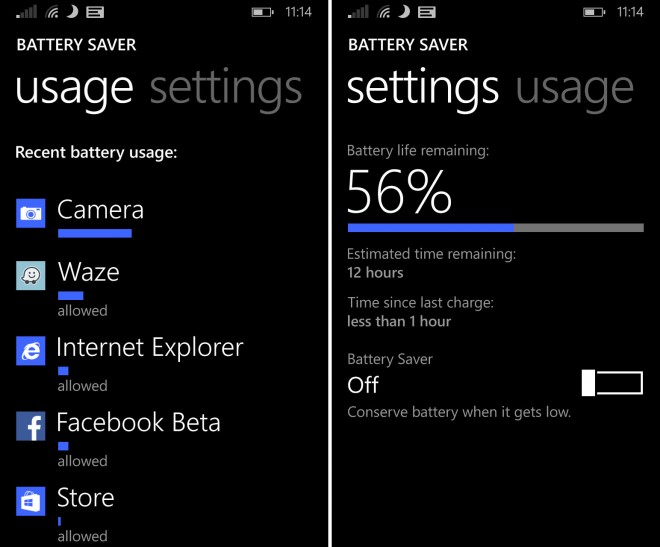 By the way, for those of you wondering, Windows Phone 8.1 is a free update and a more minor change is the fact that you can check out the signal, location icon and battery at all time on the status bar, since the auto hide is no longer enabled. The People Hub features smaller fonts and the Phone area brings Speed Dial into the mix. Freshly installed applications will have a “New” tag written below them and now you’ll also see games listed in the App List. 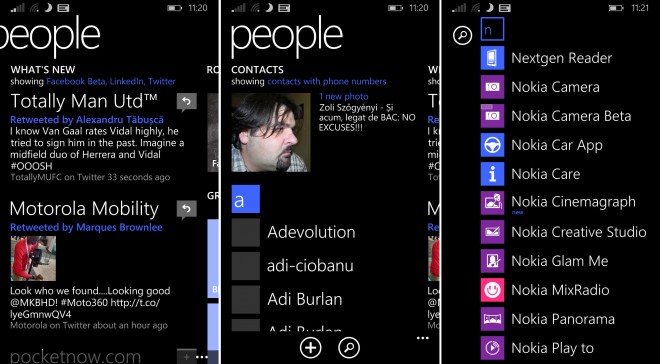 According to the surfshark vpn review, VPN support is built in on WP 8.1 and the multitasking area now allows you to swipe apps to close them (swipe down), not only press that “X” in the corner. Finally, the Music and Video Xbox apps have been separated. And now it’s time for the biggest improvement of all: Cortana. Cortana is a personal voice assistant named after an AI from the games Halo. It’s basically a Siri and Google Now rival, that works very well for a beta product. Cortana has a live tile that shows news from Bing even before you enter it. 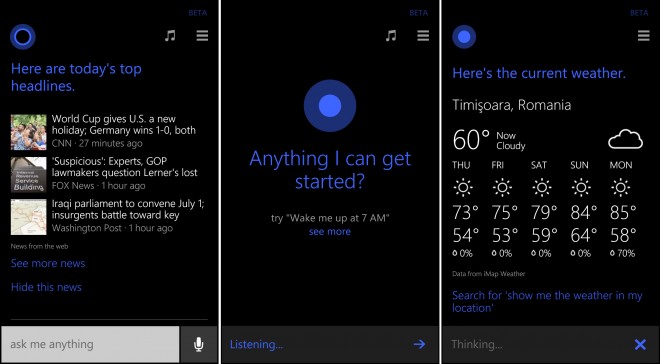 You can also access Cortana from the Search button on the device and once open, the assistant delivers you news and info you’re interested in. It all depends on the initial setup, that you will perform when prepping Cortana for the first time. The settings you create then and the tastes and habits you tell Cortana will shape the news you get. In the upper right area there’s the Notebook section, where Cortana stores its info about you. Here you can find Interests, an area that learns where you live, where you work, what you eat and drink and where you travel, plus the weather and the areas that you’re interested in.

Then there’s Remind Me for reminders and Quiet Hours (a sort of Do Not Disturb feature with Cortana taking care of calls and texts and turning off notifications). There are exceptions to the Quiet Hours rule and your contacts from the Inner Circle will break the rules if they call a certain number of times, for emergencies. Then we’ve got the Places area, where you can make a list of your favourite restaurants, bar, work place, movies and such and then Music Searches. 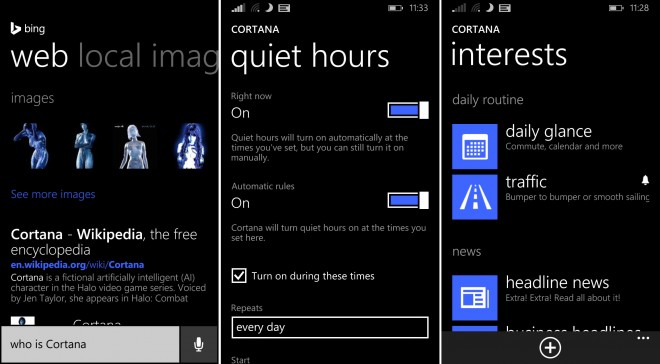 Cortana has a music search feature included, a sort of Shazam rival that works pretty fast and stores your results. Then there’s Settings with options related to language and a few more. If you don’t want to tell Cortana what to do or find, you can also type in the lower area of the screen. I actually put Cortana to the test and she was pretty fast and accurate with the only “accidents” being caused by my poor accent.

I asked her to show me Real Madrid results, the weather in my area, Pizza Hut locations nearby and send a message to a person. You can also tell Cortana to remind you something, set a calendar appointment, write a note or set an alarm. It can play a song for you, search for places or give you directions by taking you to the needed HERE app. If you say “Note” and them a series of words, you’ll have both an audio and text note inserted into OneNote. 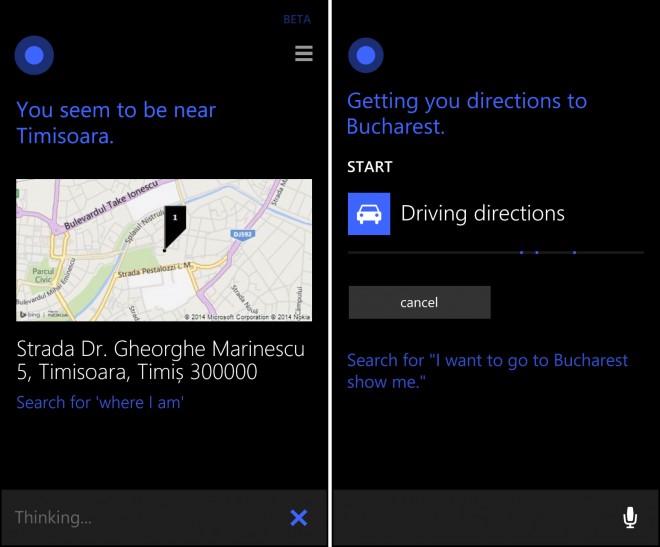 Finally, I made Cortana do some math, asked her a bunch of conversational questions, she told me a joke and everything went fine, including discussions about Android, Siri and the likes. She’s even prepared for casual conversation it seems. This is an excellent solution, a solid rival for Siri and Google Now. Back to our listing of things we found as novelty in WP 8.1, there’s a Podcasts app and new Backup options, with the option to back up your start screen design, passwords, settings, browser favourites, texts, app content like games and pics and videos. 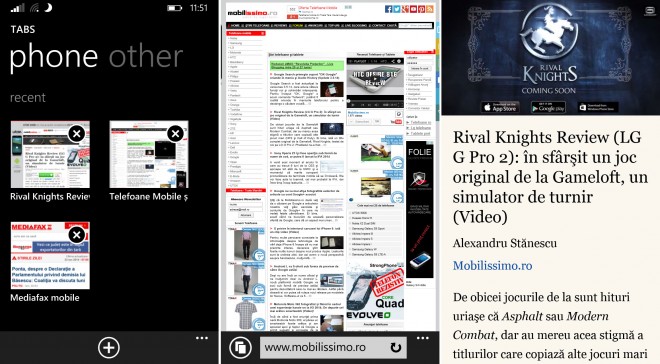 IE 11 brings an InPrivate tab, that doesn’t store data about your session, stuff like cookies or temporary files. We’ve got a Reading Mode now in this version of IE, that only shows text, links and pictures. You can also tweak the font size of the reading mode, the style (bright, light, dark, medium) and more. Microsoft promised infinite tabs for this web browser and it also allows you to see the pages you have opened on your Windows 8 device for example, in IE. 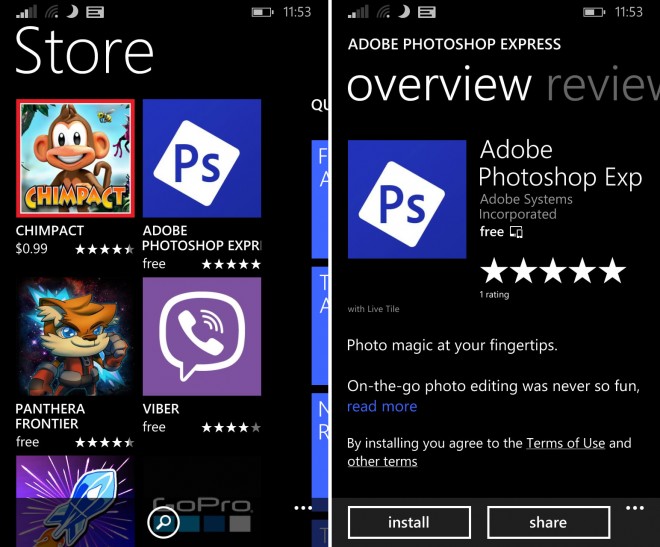 Next up, you should know that apps are automatically updated now and the Windows Phone Store now includes screenshots in the main overview area and it displays a review star graph in the grades area. An interesting new feature here is WiFi Sense, that allows you to automatically connect to nearby networks, accepting their terms, conditions and various setups. You can also exchange logins with a friend for their WiFi/your WiFi without seeing the password, just logging into the network you want. 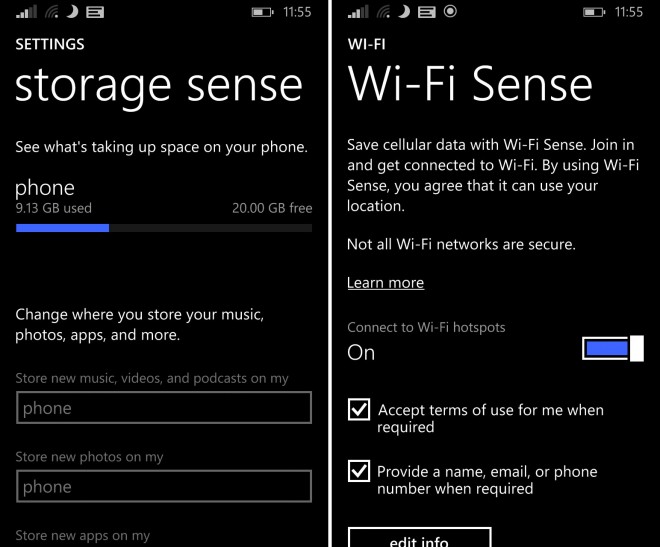 With Storage Sense you can move apps to the SD card and finally, Bing Maps is able to show you the best WiFi networks nearby. The stock Camera app got upgraded as well, with a new UI based on 5 shortcuts placed to the left side of the screen. The quick access features are very varied, ranging from lenses, to front camera shortcut, ISO, exposure and many more. The main modes are on the right and they include Camera, Burst and Video. The Burst mode is new here and allows you to take a series of pictures and set it up to keep them or get rid of them. 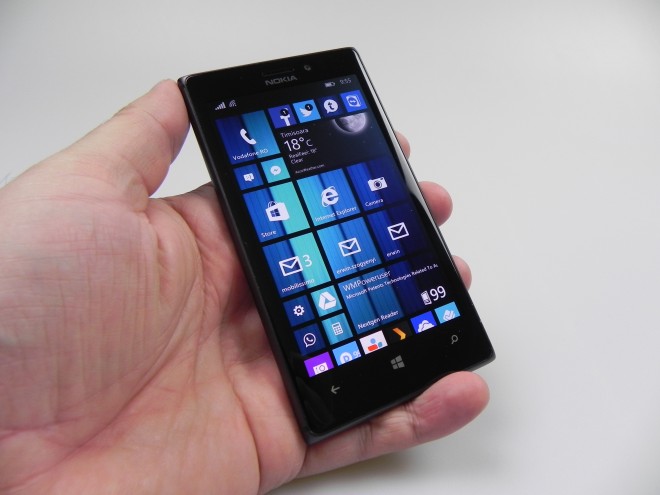 Here are the Pros of the new OS:

I usually give Windows Phone devices a 7.5 or 8 for their OSes, but Windows Phone 8.1 is starting to look like a true winner and I’ll give it a 9 out of 10. It feels mature, usable and with a bit more customization and new camera upgrades, it will be a very solid product.