Home Android Xiaomi Kenzo Gets Benchmarked, Could End up as Xiaomi Redmi 3

A new Xiaomi phone is in town, tentatively known as Xiaomi Kenzo and this handset may end up as the Xiaomi Redmi 3 in the end. In spite of the fact a big Xiaomi event took place two weeks ago, there was no sign of the Xiaomi Mi 5 and now this supposed Redmi 3 comes along and adds one more model to the coming soon list.

Xiaomi Kenzo/Redmi 3 has leaked in the GeekBench test and it’s supposed to be part of the Chinese company’s 2016 lineup. This smartphone is rumored to rely on the very same SoC used by the HTC One A9. It’s listed in GeekBench with Android 5.1.1, a hexa core Qualcomm processor and 2 GB of RAM. Xiaomi Redmi 2 was announced and released in August 2015, packing a Snapdragon 410 processor, as well as 1 or 2 GB of RAM. 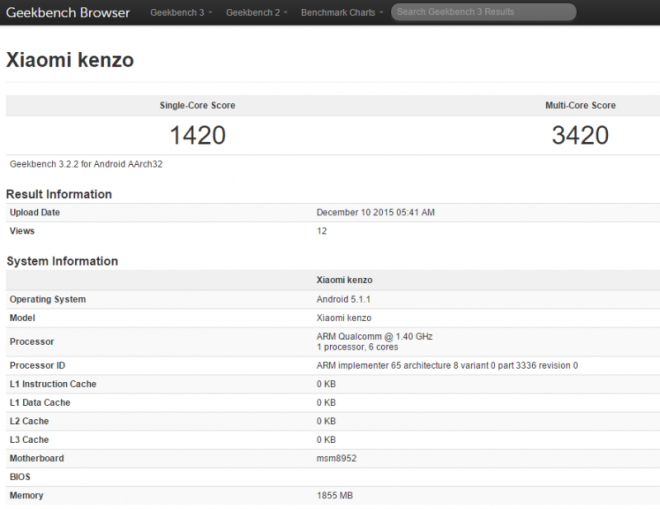 If this is indeed Redmi 3, it means that Xiaomi has decided to adopt a shorter development cycle for future handsets. The CPU mentioned above in the benchmark has all the odds of being the Snapdragon 617, with 8 Cortex A53 cores, clocked at up to 1.5 GHz, the same chipset from HTC One A9. Notice the pretty good score here, with 1420 points in the single core GeekBench test and 3420 points in the multi core one.

Now let’s see a leaked hands on picture of the device.