Home Android Xiaomi Redmi Note 3 Pro Review: MIUI May Not be for Everyone,... 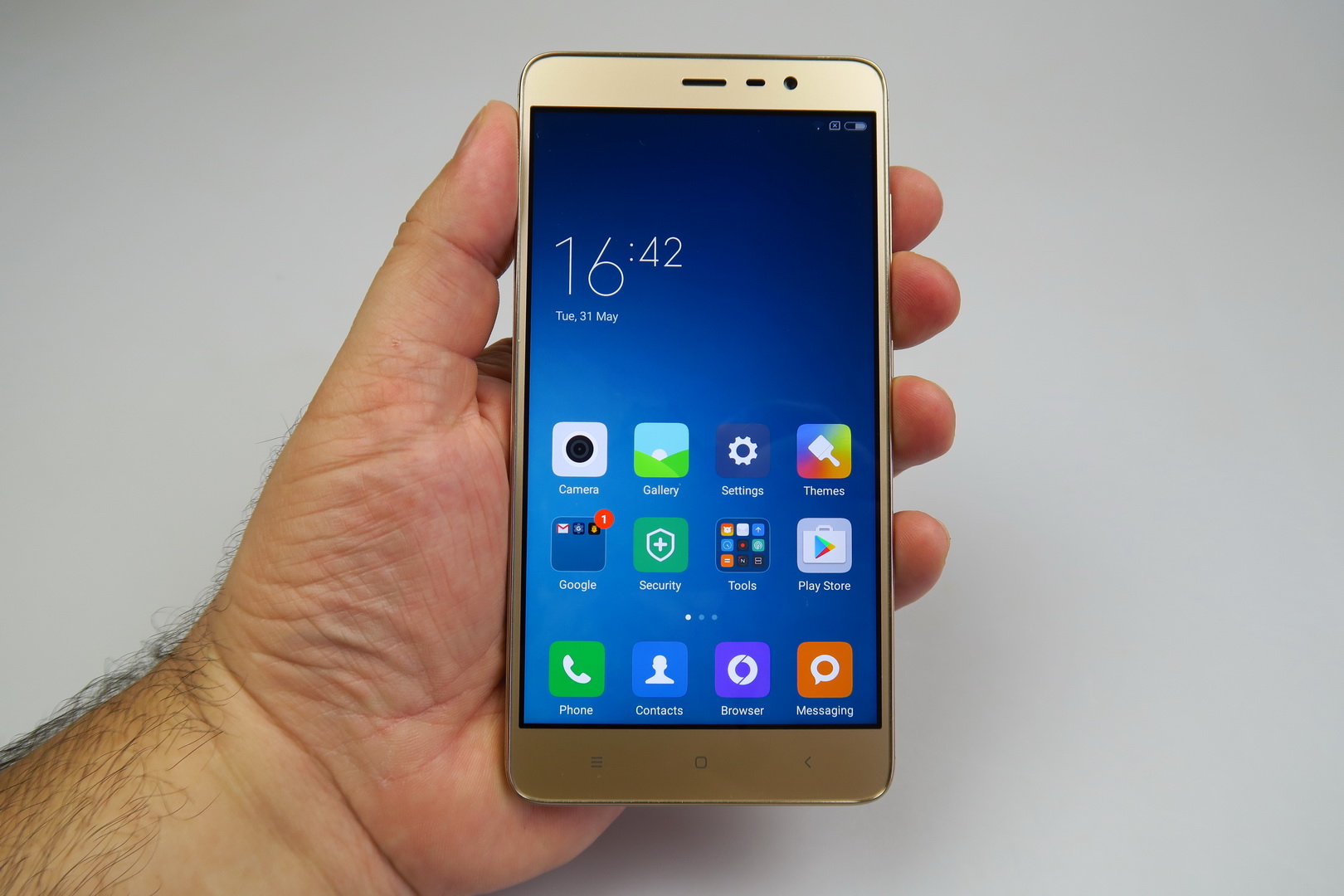 Xiaomi Redmi Note 3 Pro is the device we’re reviewing today, the Snapdragon-based version of the Redmi Note 3, with an improved camera too. The Note 3 debuted in November 2015, while the Note 3 Pro came in January this year. It’s an upper midrange phablet, priced at $209, in the 3 GB RAM 32 GB storage version. That’s exactly the model we reviewed, but you should know there’s also a 2 GB RAM, 16 GB storage version. 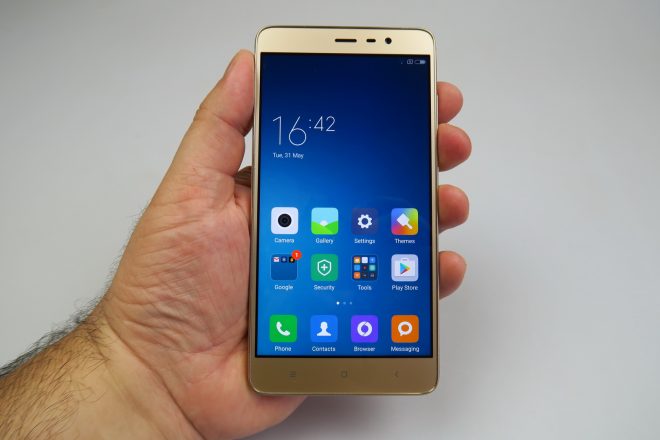 The design involves a run of the mill facade, nothing fancy and a metal unibody chassis, with a thickness of 8.7 mm. This device weighs 164 grams and compared to the Galaxy A7 (2016) for example it’s quite a bit thicker, but also lighter, by 8 grams. The back side seems to feature a thin sheet of metal and the device is comfy, but also slightly slippery.

Redmi Note 3 Pro is curved at the top and bottom, has comfy buttons and one hand usage is not that easy. It’s got curved edges and corners and a nice metal ring around the edges. The back sounds rather hollow and feels a bit fragile. Overall, this model is nothing out of the ordinary, but we liked its rounded back. It comes in gold, white/silver and black/silver. 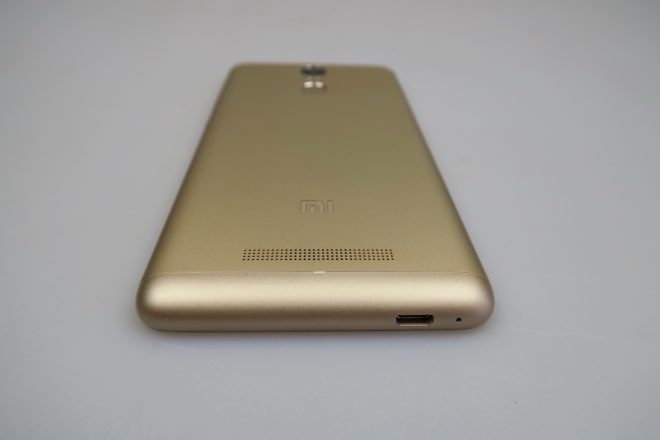 The display on board is an IPS LCD 5.5 incher with Full HD resolution and there’s no video player here to put it to the test. We used the Gallery as the player and the experience involved an OK brightness, crisp image, wide view angles and OK contrast. Colors were cold and the image was rather blue-ish. We measured the brightness and got to 481 LUX units, which is good, especially since it beats the iPhone SE, OnePlus 2 and Lenovo Vibe X3, but scores below the Galaxy A 2016 series. 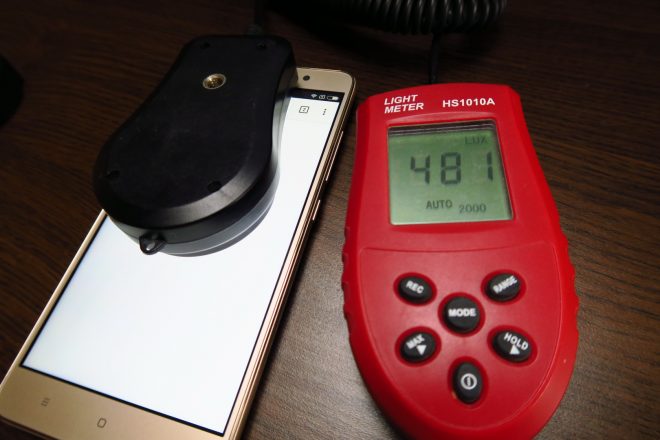 Pixels are of the RGB Stripes variety and screen Settings include brightness, Reading Mode (reduces glare and has a strength slider), Colors and Contrast (slider to set it up warmer, standard or cool), as well as Auto Contrast, Increased Contrast and Standard. Overall, a pretty good screen, minus the colors. As far as the CPU goes, Xiaomi Redmi Note 3 Pro has a hexa core chipset, a Qualcomm Snapdragon 650 unit, with a quad core Cortex A53 setup and a dual core Cortex A72 one. 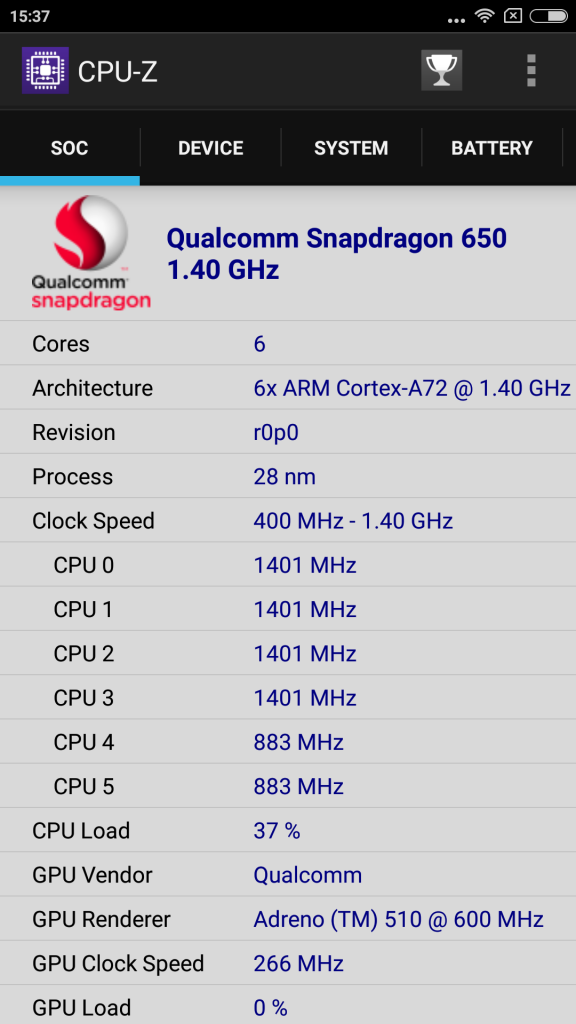 There’s also an Adreno 510 GPU in the mix, 3 GB of RAM and 32 GB of storage. We also get a microSD card slot (using the second SIM slot) and in case you’re wondering, the previous version, Redmi Note 3 brought a Helio X10 CPU, not this Snapdragon. The device’s UI is fluid, we’ve got an OK performance and no lag here.

The phablet runs Riptide GP2 and the likes of Bike Unchained with no problem whatsoever. In the benchmark Quadrant we scored above the Sony Xperia Z5, while in AnTuTu we managed to beat the Huawei P9 and the 3D sub test also had a good result. In 3DMark Ice Storm unlimited we were at the level of the iPhone 6 Plus, once again a good feat. Overall benchmarks are good. 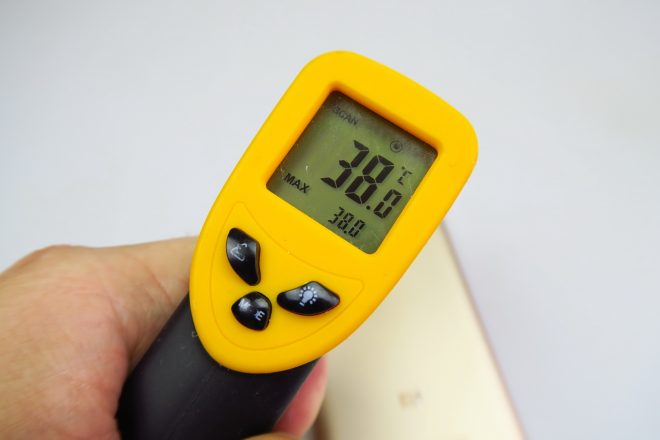 We did a temperature test and after running the intensive benchmark GFXBench we got up to the temperature of 35.7 degrees Celsius, so there’s no overheating. While playing Riptide GP2 for 15 minutes we got up to 38 degrees Celsius, so there’s also no overheating. Now as far as the battery goes, this model has a 4000 mAh Li-Po unit and comes with a 5V/2A charger, with the promise of 50% charging in one hour.

On paper we are promised 14 hours of GPS navigation, 32 hours of audio or 24 hours of 4G standby. We did a video playback test and achieved 11 hours and 45 minutes, a great result overall, beating the likes of Galaxy Note 5 and Galaxy S6 Edge+. It did score below the Xiaomi Mi 5 though. In PCMark we scored 11 hours and 5 minutes, a huge result and the 5th placed model overall, from all the handsets we tested. 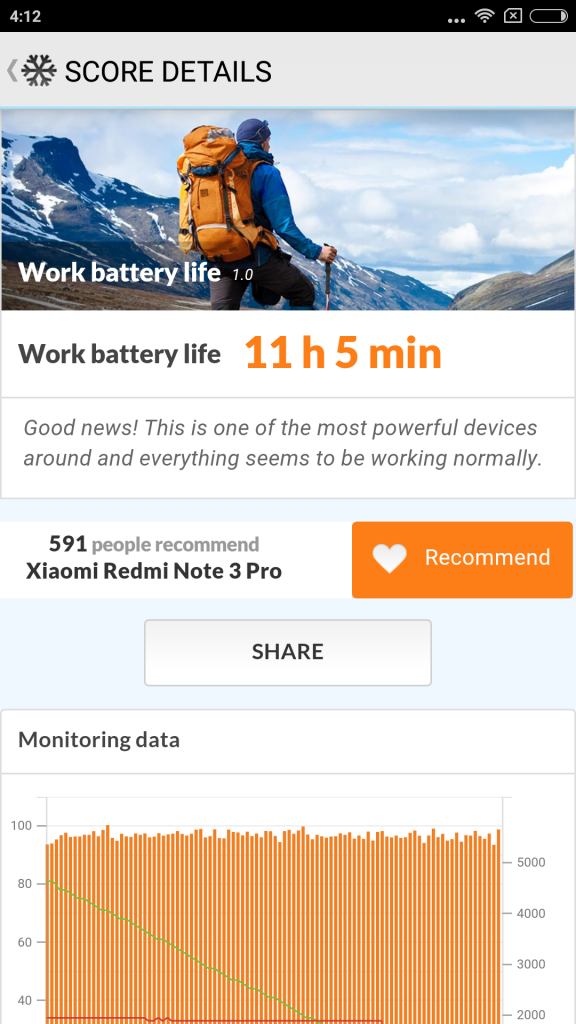 Basically, the Xiaomi Redmi Note 3 Pro beats all the phones in this chapter, minus battery phones. Charging takes 2 hours and 24 minutes, which is OK and superior to the HTC One M8 and Lenovo Vibe X3. Settings for the battery include Profiles, like Default or Marathon (WiFi off and data off) and Sleep (all network off).

You can schedule a profile for a certain time and in the Power Save section there are 3 options: Off, Standard and Advanced. It’s a great battery overall and the standout aspect of the product. On the audio side we must first mention that there are no headphones here, bundled with the device. The speaker is placed at the back and the music player options include an equalizer with 7 custom channels and Mi Sound Enhance. 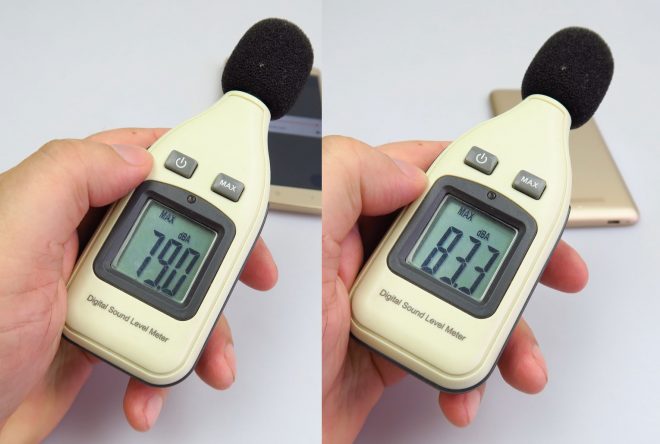 There are also Genre Settings, but only available with headphones. The acoustic experience involves good volume, clear sound, no distortion and a good bass, but there’s also a slight muffling. We used a decibelmeter to measure the prowess of the same speaker and got up to 79 dBA at the front and 83.3 dBA at the back.

This means we beat the iPhone 6S’s 81.7 dBA, as well as the Huawei P8 and Honor 6. There’s also FM radio available, with recording features included. Now let’s discuss the camera! Xiaomi Redmi Note 3 Pro has a 16 megapixel back shooter and a 5 MP selfie cam. The main one comes with PDAF, F/2.0 aperture and dual tone flash, as well as achieving 0.1 second focus. 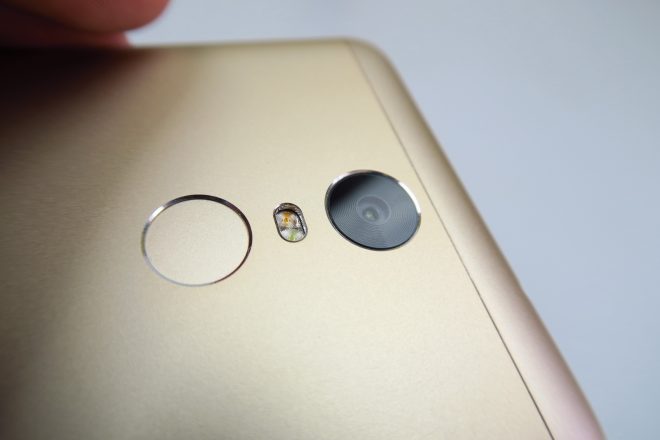 There’s also an Age and Gender detect option. You can also tweak contrast, saturation and sharpness and annoyingly there are no resolution settings here. The gallery of shots taken during the day includes quality closeups, nice colors, minus the one of the sky and clear and crisp images. Once we zoomed into details, there was quite a bit of detail loss. 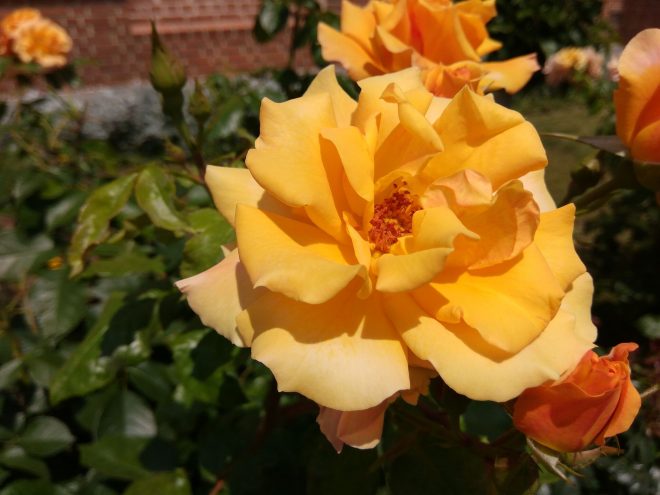 In landscape shots, details were only OK and when it came time to pull an HDR, it felt a bit artificial. We also got a bit of oversharpening and a layer of “fog” in the selfies. I liked the texture of the bell monument and the texture of various cars and buildings. There was no blur in the shots and exposure, white balance and dynamic range were OK.

The closeups particularly stood out through their quality. Panorama had a very low resolution, of 2936 x 432 pixels and was underwhelming. Low light capture wasn’t very good, as the Redmi Note 3 Pro doesn’t seem able to take on the dark areas. We got blurry shots and foggy pics and the street lights had big halo effects. The flash shots were OK, but generally the night time shots were unimpressive. 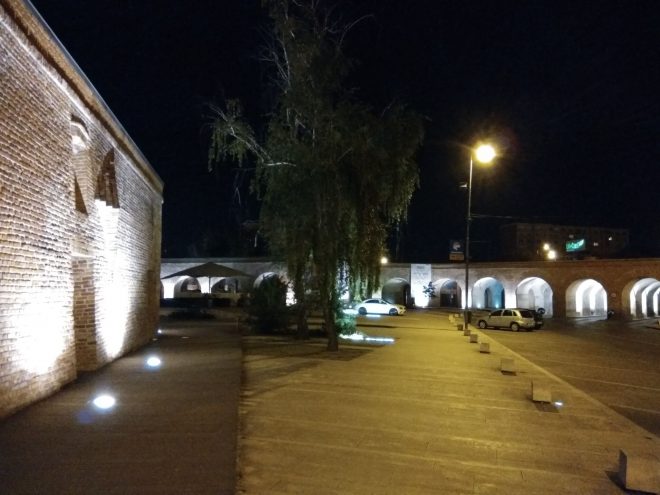 Overall, I’d say the Xiaomi Redmi Note 3 Pro handles itself well in the photo taking department, but tends to over sharpen the pics quite a bit. It’s on par with the Huawei Honor 7 let’s say, but it’s clearly below the Galaxy A5 (2016) and its selfies are below the Huawei Honor 5X, for example. Video capture is done in MP4 format, in full HD resolution, at 30 FPS and with a bitrate of 15 Mbps.

There are wind problems here, with the microphone at fault and there’s also a bit of refocusing going on. We also got burnt frames and quality loss when zooming in. I have to highlight that the microphone problems are quite serious, since the vids don’t sound well. Colors and textures are OK and stabilization is also reasonable.

We got a shaky church video, but clarity was good in general. The sky wasn’t properly rendered and my stabilization test seemed rather poor, even for digital stabilization. In low light conditions things got very bad, with 7 Mbps and 16 FPS, basically the filming being in frames. Lack of clarity, grain and darkness are big problems.

I’d say that the video capture was poor, even for this price tag. It’s clearly below the Huawei Honor models and the Galaxy A5 (2016). Now let’s discuss the browser. So, we get a preinstalled MIU browser here, that’s rather slow and includes some interesting features like Night Mode and Find on Page. The keyboard is stock and we got some good benchmarks, but only in Chrome (Sunspider and BrowserMark). 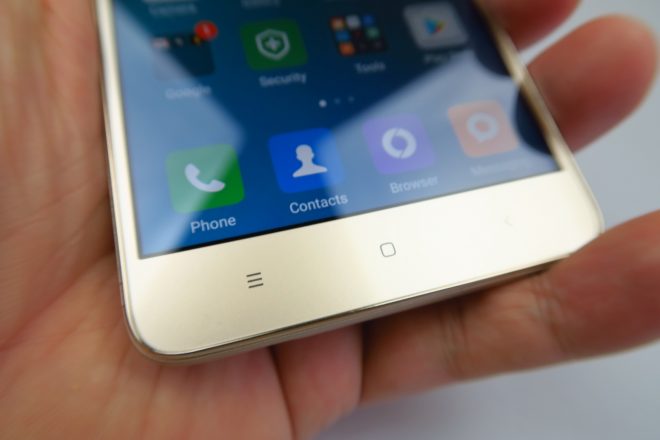 As far as connectivity goes, we get the full array: 4G LTE (FDD and TDD), dual SIM slots (micro SIM and nano SIM), WiFi 802.11 a/b/g/n/ac dual band, WiFi Direct, Bluetooth 4.1 GPS, Glonass and infrared. There’s no NFC, but there’s microUSB 2.0 and USB OTG support, as well as VoLTE and 2 microphones. Calls are loud and clear and the signal was good.

We also get call recording support. A Speedtest was also performed and we got 53 Mbps in download and 38 Mbps in upload via 4G on Vodafone, which wasn’t exactly impressive, but in general connectivity was OK. This smartphone runs Android 5.1.1 with MIUI 7.1.9 on top and there’s no app drawer here. Icons are abstract and the colors are pretty flat. 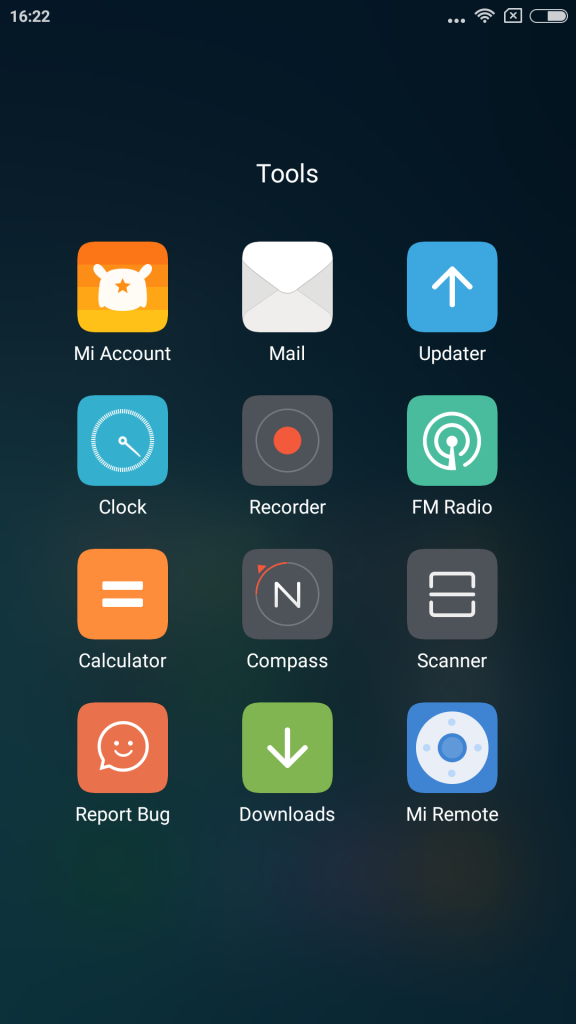 This is a minimal UI, with lots of nice looking widgets and effects. Multitasking is shown as a horizontal list of icons and the dropdown portion includes notifications, Clean Master functions, Quick Settings and Music Player, as well as Mi Drop, used to share files. Settings let you customize themes, text size, Do Not Disturb, a Lite Mode and Screen Lock, with fingerprint scanner included. That one works just fine, without a hassle.

There was also a Child Mode and One Hand Mode offered here. The preinstalled apps list offers 33 apps, an OK number and certainly not a sign of bloatware. The Security app offers a Cleaner, Blocklist, Data Usage, Virus Scan and then there’s Mi Remote, Notes, CM Security and UC Browser. Cleanmaster remains at the core of the experience. 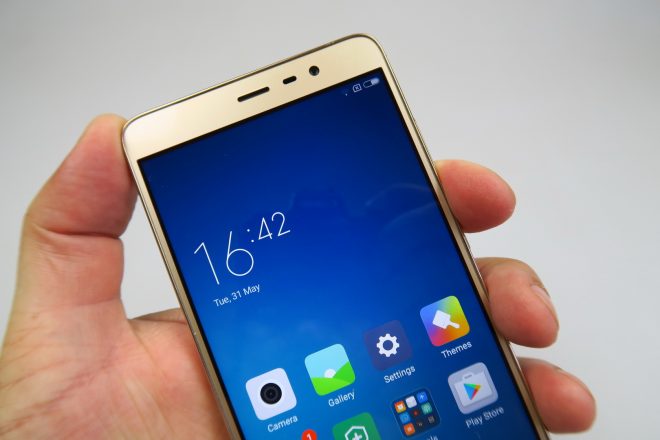 I find this to be a solid Samsung Galaxy A7 (2016) rival, maybe minus the camera and design. The price was great and this has got to be the phone with the best batter in the sub $300 or $400 range. Performance was also good, so this is a solid gaming and movie watching device. You can find its updated price here.