The folks of Engadget have uncovered what we already supposed would happen, once the fresh Zune HD was launched: the device became a major hit and sold out, both on the Internet and in stores. 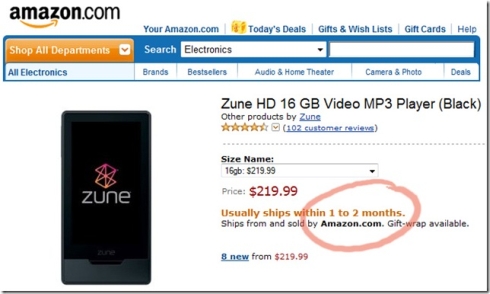 As we speak, Amazon lists a 1-2 month waiting time for the 16GB Zune HD model and a waiting time of 1, up to 3 weeks for the 32GB model. Also, Best Buy lists the player as “backordered”, while New Egg mentions it as “sold out”.

For now, these issues haven’t plagued Microsoft’s store just yet, but that’s sure to follow.