Courtesy of the guys of 9to5mac I’ve just found out that there’s finally a way to jailbreak your Apple A5-based device… After long weeks and nights of the hackers and devs behind this we get a piece of software called Absinthe A5. Hacker p0sixninja reported this and informed everyone that the jailbreak community finally came up with an untethered jailbreak solution for the iPhone 4S and iPad 2 running iOS 5.0 and iOS 5.0.1.

Below you can find a tutorial on how to perform this jailbreak called Absinthe A5. This is the follow-up to the untethered iOS 5.0.1 exploit that came last year for non A5 devices. There’s also a new greenpois0n that you’ll have to use, after you download it from here. It only works on the Mac right now, but rest assured that a Windows version is coming ASAP. The jailbreak works on the iPhone 4S running iOS 5.0 build 9A334 and iOS 5.0.1 build 9A405 and build 9A406. Also, it works on the iPad 2 running iOS 5.0.1 build 9A405.

Last I heard pod2g and an all star group of hackers were working round the clock to complete a vital piece of this untethered jailbreak. There was also a video posted at the beginning of the current week showing that Chronic Dev Team has managed to get the jailbreak to work on the iPhone 4S. The new greenpois0n tool uses the Corona exploit that’s the pride and joy of hacker pod2g, so everything makes sense now. Both the iPhone Dev Team and Chronic Dev Team worked hard on this project so kudos to them. 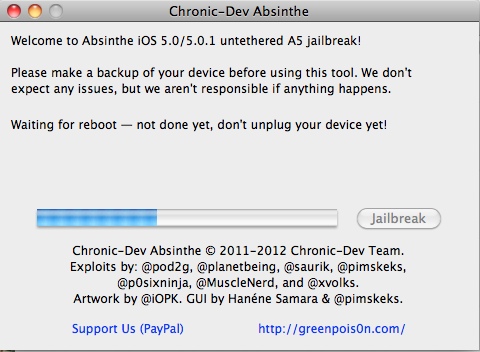