Acer CloudMobile S500 came to us for review with excellent recommendations and fit them with every single millimeter of its body. We’re dealing with a model announced in February last year and released on the market in September. It’s priced at 200 euros free of contract, which is an excellent price, or 1 euro on contract, another excellent offer. 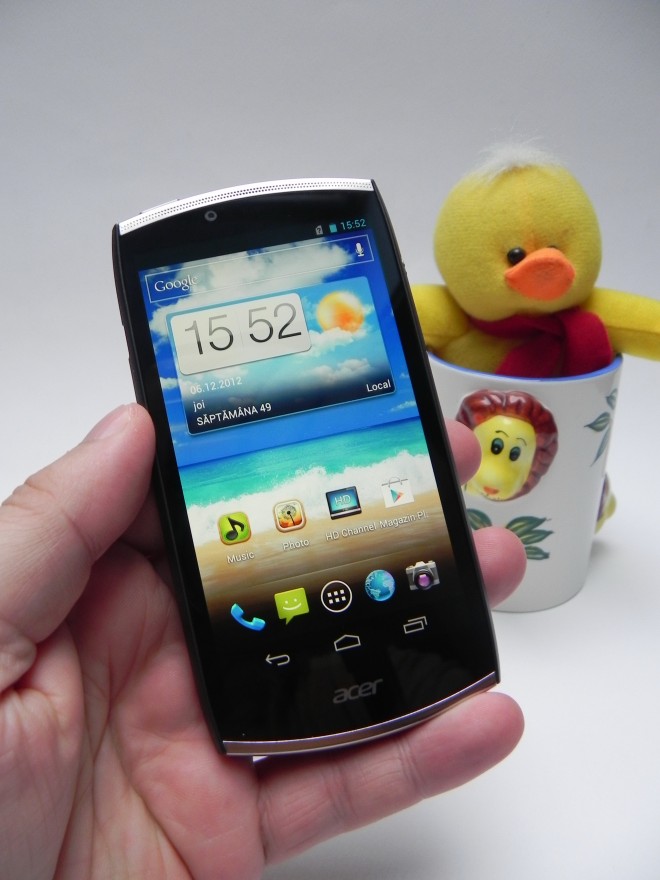 Its specs are pretty much the same ones as on the HTC One S, so that’s why this model is so hyped. The design is a bit plasticky and some areas of the back tend to creak, but that’s a problem with only some of the units, from what I’ve heard. We’re dealing with a phone that uses a microSIM card slot, placed under the hood, where it also has the microSD card slot. We don’t have any physical buttons at the front, since this model relies on virtual buttons alone.

However, overall, the design of the phone was a pleasant surprise, with nice curves and a nifty upper and lower metallic side. The grip is good, the device is light and it even received an IF Design Award for 2012. Acer CloudMobile is 9.9 mm thick, it weighs 122 grams and packs a 4.3 inch display. It has a speaker/earpiece hidden in the top metallic part, a very cute gimmick. The speaker at the back, the audio one is hidden below a Dolby silver logo. 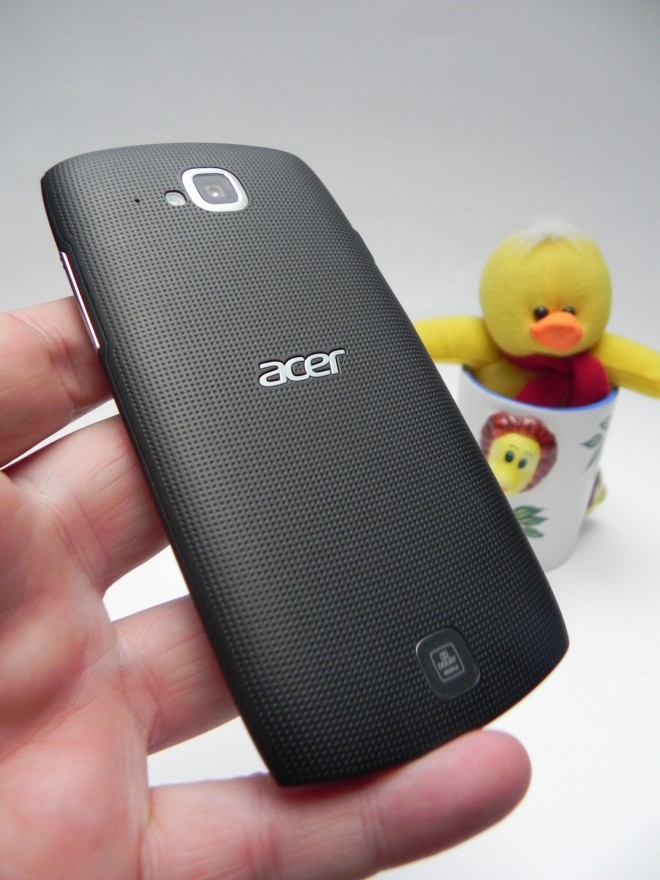 Moving on to the hardware, we get an IPS LCD 4.3 inch 720p screen, plus 8 GB of storage, 1 GB of RAM and Dolby Mobile technology. As far as connectivity goes, we’ve got HSPA+, WiFi, DLNA, Bluetooth 4.0, NFC and at the back there’s an 8 megapixel camera with touch focus, HDR and 1080p video capture. The secondary front camera is also an HD one. Inside the phone we’ve got a Qualcomm Snapdragon S4 dual core 1.5 GHz Krait CPU, with Adreno 225 GPU. Other specs include an accelerometer, proximity sensor, compass, FM radio, GPS and a Li-Ion 1460 mAh battery, good enough for 10-12 hours of use.

Of those hours, we used the device for 1 hour and a half of gaming, 30% of the battery for taking 100 pics and videos with the camera and the rest for movies, web browsing and idle time. The battery charges in one hour and 40 minutes from 1% to 100%. This model runs Android 4.0 ICS and moving on to the multimedia test, we played some tunes and heard the benefits of the Dolby Mobile technology. There’s good bass, crisp sound and as far as video goes, we’ve got a bright, clear and crisp display, with good viewing angles, good colors and a pixel density of 342 ppi, higher than on the iPhone 5 actually. 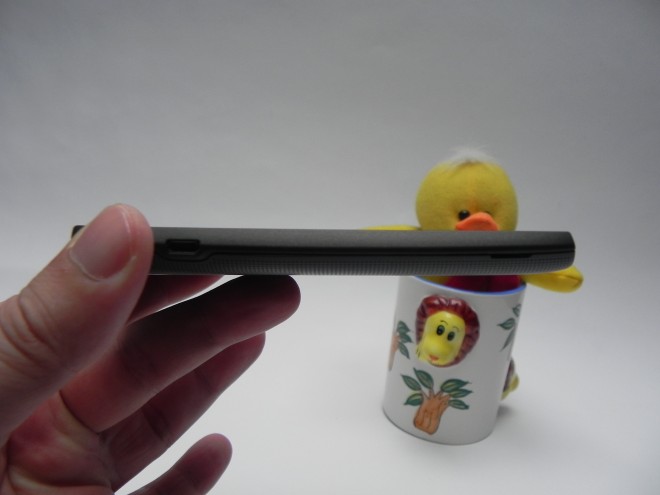 As far as the camera goes, the 8 megapixel sensor has nice zoom abilities, panorama feature, nice HDR, low light mode that’s efficient and a continuous mode that takes 10 pics in a row. You can take pics while taking a video and the performance is close camera-wise to the HTC One S. As far as benchmarks go, we compared the CloudMobile with the HTC One S And ASUS PadFone 1, both sharing its CPU choice, plus the LG Optimus 4X HD handset, a quad core Tegra 3 unit that’s reasonably affordable.

In Quadrant the Acer CloudMobile scored 5114 points, beating the One S, PadFone 1 and only slightly being below the LG Optimus 4X HD, taht scored 5149. In AnTuTu we once again beat all models with 9455, aside from the LG Optimus 4X HD, that was in the 11k points range. in NenaMark 2 we had 54.8 FPS, lower than the HTC One S and PadFone 1, on account on them having lower screen resolutions. You should also know that this model has a good call quality, but the high notes of the human voice are heard as slightly synthetic sounds.

Android 4.0.4 is customized in the minimal way, so it’s a pretty stock experience. I like the unlock screen quite a bit, with its turning card animation and you should know that this phone has Swype preinstalled. And now it’s time for the verdict! Here are the Pro aspects of the phone:

And on the Cons side: