Sony Xperia Z aka Yuga has already leaked a ton of times, first in benchmarks and… word of mouth, then specs, then a fully detailed preview from Mobile Review, that seemed underwhelmed. Now with CES 2013 closer and closer the final details have leaked: a press render and a price tag for this brand new Sony flagship. 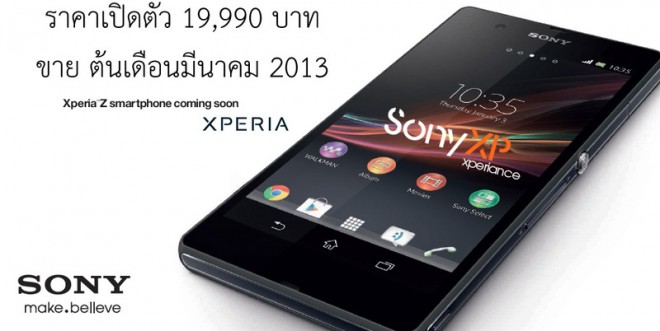 The quad core smartphone with 5 inch display is supposed to cost $658. Sony Xperia Z was actually priced in Thailand in the local coin, that was converted to dollars, indicating that this will be one of the initial debut territories. The handset relies on a Qualcomm Snapdragon S4 Pro chipset, a 5 inch Full HD display, Mobile Bravia Engine 2 technology and uses a 13 megapixel camera with Exmor RS sensor and HDR mode for video, a first for mobile phones.

It also has 16 GB of storage, 2 GB of RAM, runs Android 4.1.2 JB and it’s both waterproof and dustproof. LTE is supported on it the we’ve got 3 color versions of the handset coming: purple, white and black. From further updates and leaks it seems that the price mentioned before was just for Thailand and in the international version, the device will end up costing $750.