Acer hasn’t made any significant mark on the smartphone market since it announced a bunch of handsets at MWC 2013, but now it’s back with a new device, that will make it stand out of the crowd. I’m talking about the Liquid E2, an update to the E1 model. 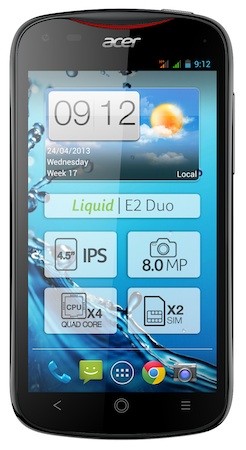 It bumps the dual core CPU to a 1.2 GHz quad core processor and it also offers an optional dual SIM card slot for the handset. There’s a 4.5 inch qHD IPS screen on board, while at the back we’ve got an 8 megapixel camera that promises zero shutter delay. The device has the same dual speakers from the back of the E1 and it appears that this model will come to the UK, France, Germany and some more countries in early to mid May.

The price tag will be a bit under $300 and the handset will be available in rock black and classic white. Acer Liquid E2 measures 9.9 mm in thickness, weighs 140 grams and has a 2000 mAh battery, that offers up to 9 hours of talk time, or up to 450 hours of standby time. There’s also 4 GB of ROM available, plus 1 GB of RAM.