AdMob has just released its March 2009 Mobile Metrics report, analysing the monthly trends in the AdMob Network. You can check it out for yourself, by downloading this PDF report and we have to say that the most important aspect of this document is the growth of Android. 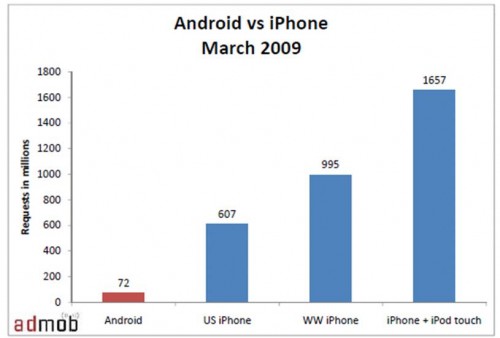 HTC Dream (G1) generates 2% of AdMob’s US requests and is the fourth placed smartphone, following the iPhone, BlackBerry Curve and BlackBerry Pearl. Android’s growth exploded after AdMob launched ad units integrated in apps at the end of January, which pretty much shows the public’s interest regarding the platform’s software.

In spite of Android’s growth, the platform and devices that run it can’t compare to the iPhone’s initial growth. For example, the Android traffic in the US grew 47% per month (on average) since the first device’s launch, while the iPhone traffic grew 88% per month after the App Store was launched.

This performance can be “blamed” on the iPhone’s huge marketing machine, called Apple, but Android is surely a worthy opponent that we’ll keep an eye on in the following years.