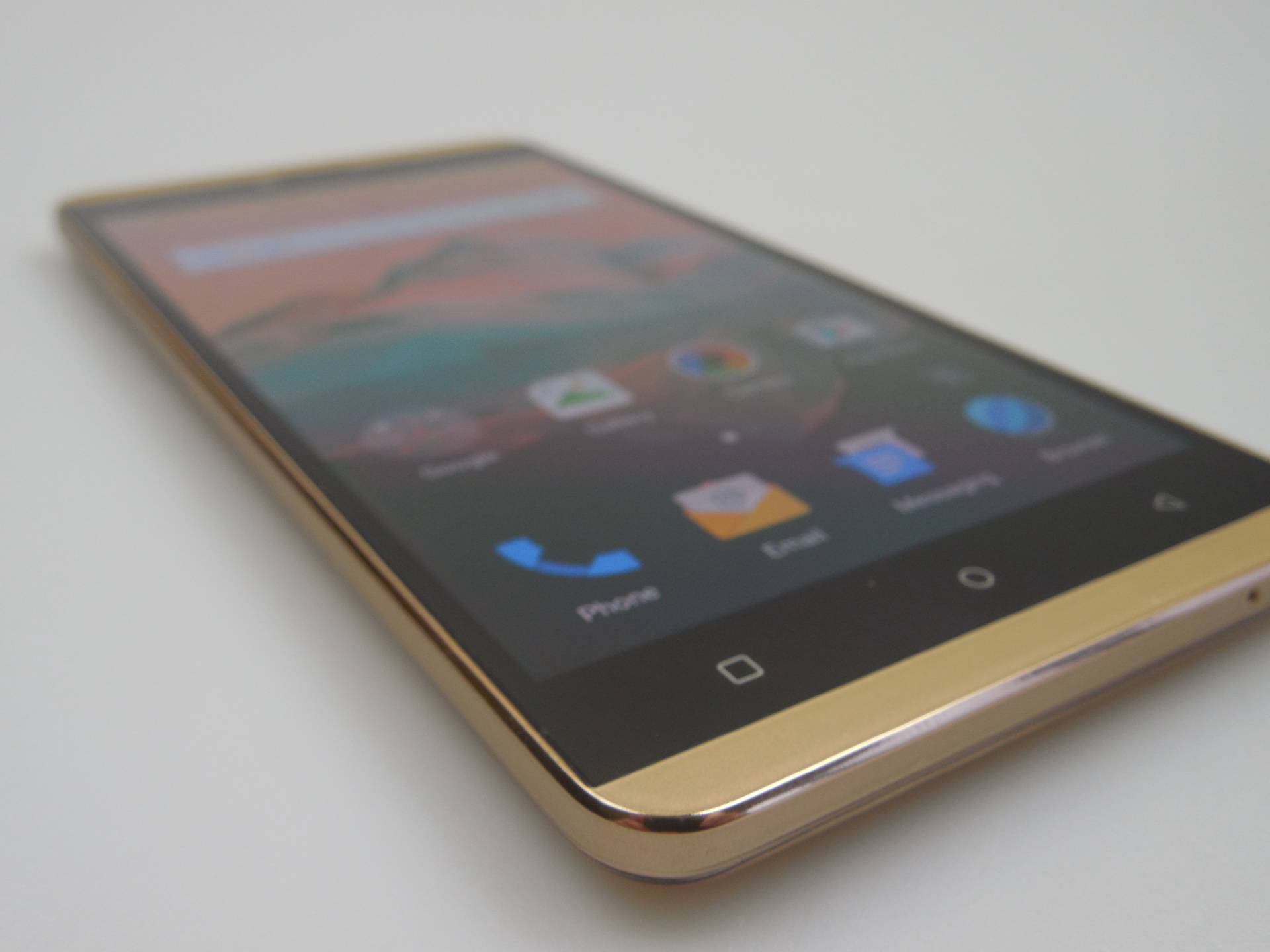 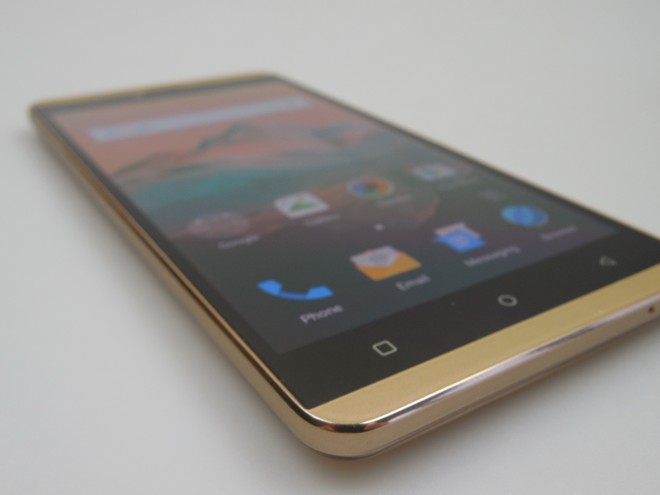 Priced at $252, the Elife S Plus is a midrange youthful phone and its Romanian version came to us in a prism shaped box. It’s the first USB Type C handset for Allview and I’m willing to be that the same applies to Gionee. Available in white, dark blue and gold, this model was tested by us in the gold hue. It’s a 5.5 inch phablet with a 7.2 mm waistline and it’s thus 0.1 mm thicker than the iPhone 6S, which is not bad.

The smartphone weighs 155.3 grams, meaning it’s about the same weight as the HTC Desire 820. It relies on an aluminum – magnesium alloy for the internal chassis and outside there’s a glossy and slippery polycarbonate shell. The back is a bit of a fingerprint magnet and we’ve got a solid frame in the mix, by the way. 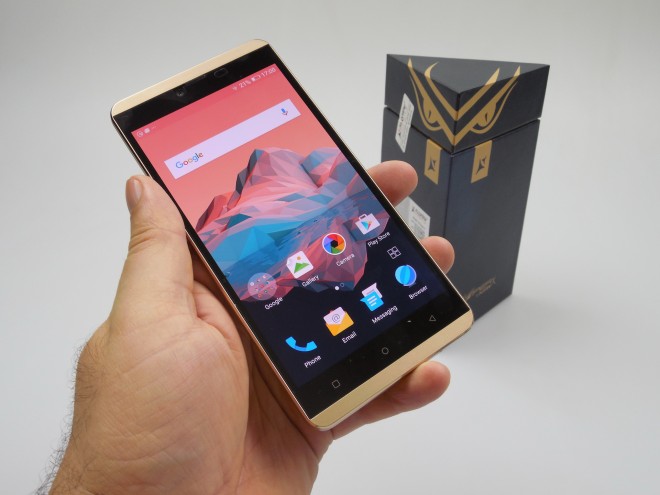 I have to say that this model is reasonably easy to use with a single hand and comfy. Upfront we find the earpiece, front camera, sensors and notification LED, as well as 3 capacitive buttons. Bezels are reasonably thick, even by 2015 standards. At the back we find the main camera, plus LED flash and the speaker. The back cover doesn’t exactly open up fast and it’s also hard so shut back up with the small clipses.

Below the back cover we find the dual SIM slots, microSD card slot and removable battery. At the top there’s the audio jack, while at the bottom we find the USB Type C port and microphone. To the left there’s nothing and to the right we find the volume buttons and Power button, all of them with OK feedback. Overall, this is one comfy phone, but also pretty slippery, on account of the polycarbonate case. 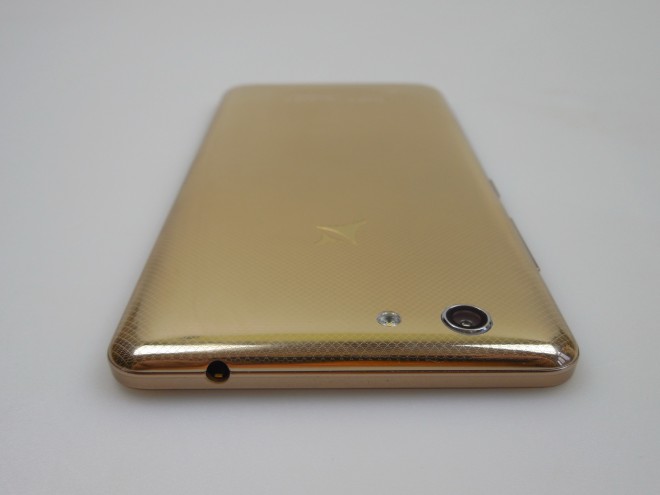 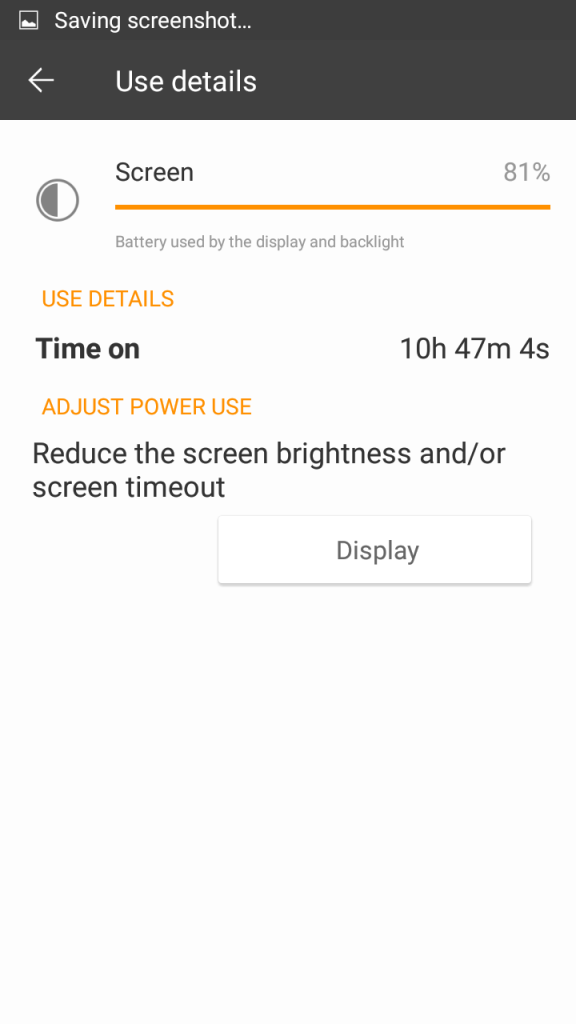 On paper, we get 393 hours of standby time and 821 minutes of talk time. During our test, that involves HD video playback in a loop with WiFi on and brightness at 200 LUX, we achieved an excellent 10 hours and 47 minutes. This means we surpassed the HTC One M8 (10 hours and 15 minutes), Samsung Galaxy S6 (9 hours and 49 minutes), or the ASUS ZenFone Selfie (10 hours and 11 minutes). 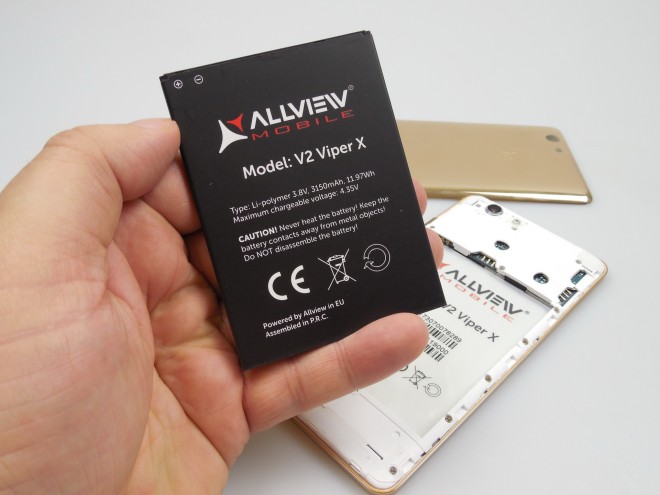 Obviously, there are quite a few handsets that juice up faster: ASUS ZenFone 2 (1 hour and 50 minutes), Samsung Galaxy A5 (1 hour and 45 minutes) and OnePlus 2 (2 hours and 13 minutes). In the Settings area you can find the Power Management options, that include the Modes (None, Normal and Extreme). Normal uses a dark theme, deactivates Bluetooth, GPS, syncing and reduces the CPU frequency, while Extreme Mode uses a black and white theme and only lets you access core phone features, like contacts, messaging, clock and calling. 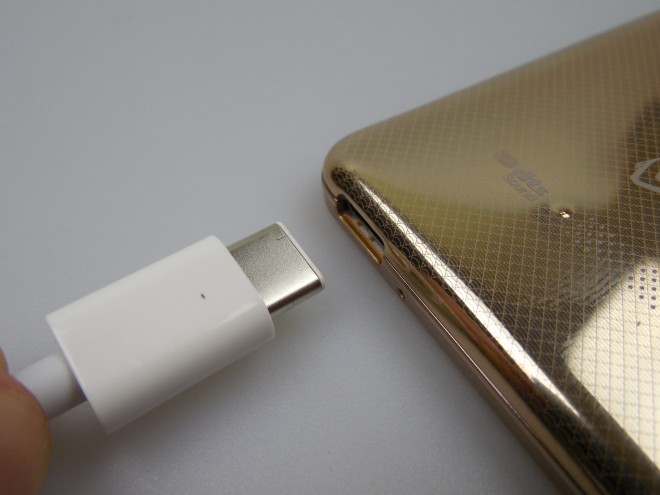 Other battery options include Intelligent Power Saving at Night, Intelligent Memory Cleanup and Standby Intelligent Power Saving. This is a good battery overall, so there’s nothing to complain about here. Let’s move on to acoustics, where we get a small speaker and an app simply called Music as the player. Options here include Shake to Change Song, an equalizer with DTS options and effects volume with the following presets: off, classic, dance, folk, heavy metal, user and 5 custom channels.

When listening to tunes you are given the option to apply “volume strengthening” by adding an extra notch or two to the volume. I’d say the volume here is OK, the sound is loud and clear and particularly the guitar and bass made a good impression. There’s some muffling on a flat surface. The headphones bundled with the smartphone are comfy, have a nice look, by combining what seems to be metal and rubber at the bud part. 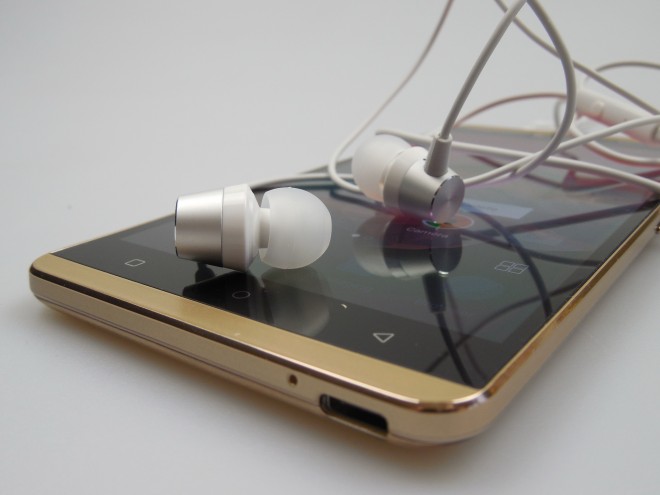 There’s a tangling wire and big remote in the mix too. The same headset offers an OK bass, clear sound, good isolation, but it could be louder. Once the headphones are attached, you are given extra EQ options, like Standard Headset, Ears, Earphone, Headset, Soundbox and Custom with sub options like: DTS Focus, DTS Trubass, DTS Space, DTS Definition and DTS Center.

FM radio has a minimal UI and features like Search, Speaker and Record FM. We did a decibelmeter test and achieved 83.7 dBA upfront and 90 dBa at the back, quite the difference to be honest. We surpassed the LG G Flex 2 (82.9 dBA), OnePlus 2 (82 dBA) and these are all front side values, while at the back we beat all the phones we ever tested minus the OnePlus One and BlackBerry Passport, that go past 90 dBA. 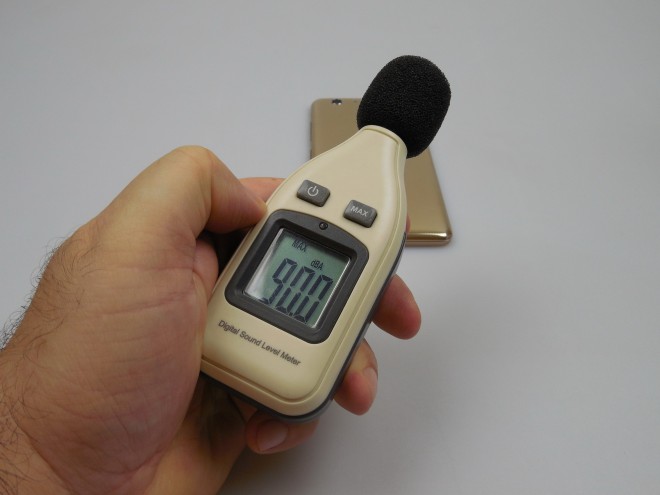 Acoustics are good and we move on to display. This is an AMOLED 5.5 inch screen, with a 1280 x 720 pixel resolution and Gorilla Glass 3 protection. The video player we used has a pop up play feature, as well as DTS support and aspect ratio options. The actual viewing experience involves a bright and crisp image, a bit oversaturated, but the contrast is OK and view angles are wide. 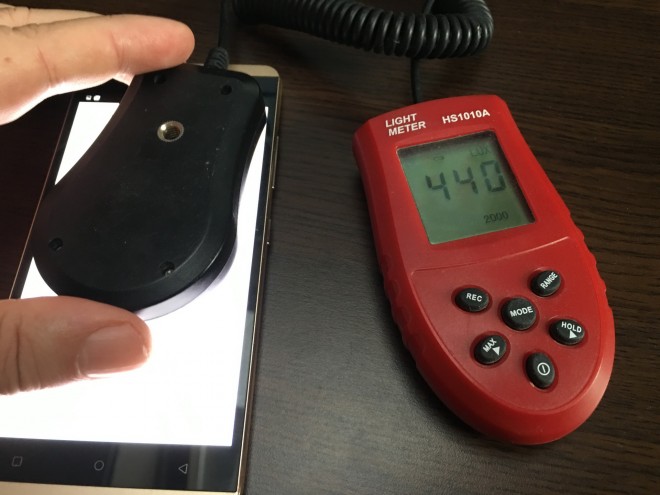 Settings for the display include Adaptive Brightness, economical backlight, font size, sleep, LCD effect (neutral, cool, warm) and Skylight, with a holster functionality. Now it’s time to talk about the camera. This one is a 13 megapixel unit, with F/2.0 aperture, 0.3 second focus and 0.46 second capture time.

The sensor is made by Samsung and it’s the S5K3M2 model, paired with an LED flash and ISOCELL technology. It takes shots with 1.12 micron pixels and the sensor measures 1/3.06 inches. It’s a familiar sensor, since it’s the same with the one found on the Xiaomi Mi 4C. The front camera is a 5 MP shooter. As far as the Camera app goes, it doesn’t start up very fast and it keeps the same UI and options we showed you on the Allview P8 Energy. 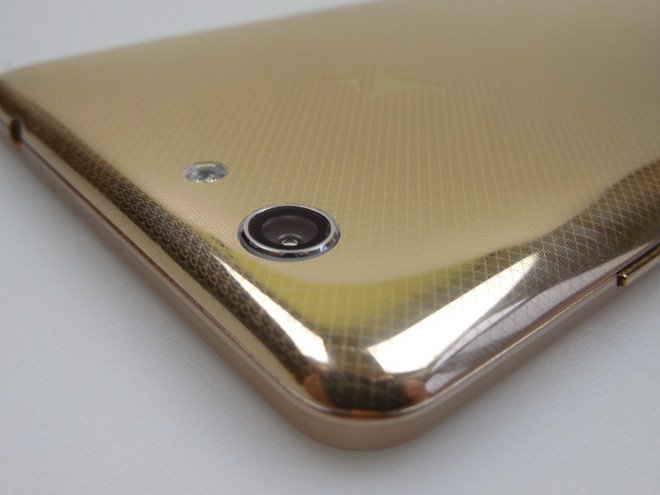 To the left there are the Settings, including anti banding, guide, geotagging and countdown, as well as resolution (13 MP in 4:3 or 10 MP in 16:9). Then there are the capture modes: Touch Shot, Normal or Volume keys, front camera shortcut and flash. The main Modes are Smart Scene, Ultra Pixel (a 12 MB file with a 64 megapixel resolution), then Pic Note (lets you create PDFs out of blackboards and notebooks for example) and Face Beauty (Enlarge eyes, make face slimmer, whiten face and smoothen face).

The list of Modes continuous with Filter, Night, Pro (with functions like exposure, ISO up to 1600, white balance, shutter speed from 1/30 seconds to 14 seconds and focus tweakable), Magic Focus, Panorama, Normal, Take Anytime and HDR. The camera experience involves an OK focus speed, fluid zoom, fast picture capture and an exposure and metering guidelines to move around the screen. 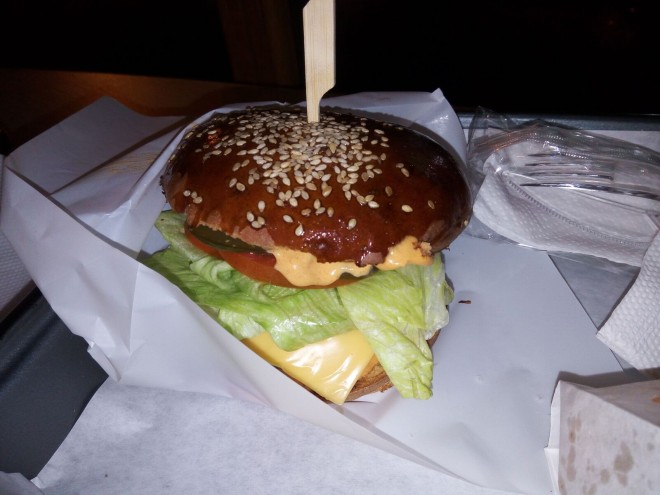 The gallery of shots taken with this handset was done in December and we started off with some indoor shot during a HTC event. A series of colorful HTC Desire 626 models were photographed and it was pitch black in the room, so the flash actually did a fine job. The resulting shots are clear and crisp and only about 15% of them are blurry, on account of me not being patient enough to let the camera focus.

Then we photographed some burgers, with OK texture, until the flash was off and then it looked blurry and grainy. And finally, we went outside during the day, on a weather that mixed clouds and sun. Pictures had cold and artificial looking colors, but we did achieve a great flower closeup. We also took an Ultra Pixel shot of a fountain, with great details in the mix. 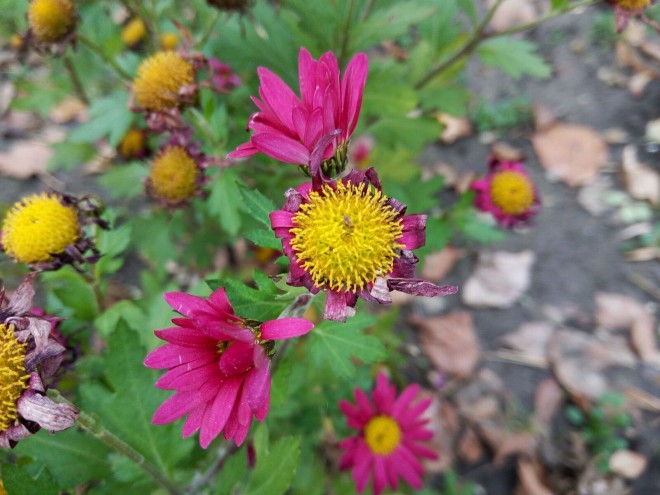 HDR looked artificial and the camera was reasonably good when it came to shots that included text and colorful pictures. I took a closeup of a metal locket, with excellent texture and then came the panorama, with 4640 x 1184 pixel resolution and good clarity. It could be higher, to be honest. There’s some serious quality looks when zooming in in this shot.

Selfies have good clarity and nice skin texture and the landscape shots offered good details, even after zooming in. Closeups were probably the best feat of this camera, thanks to the Magic Focus feature. Those colorful toys in the park had a gloss that was very well caught on camera. Overall, I’d say this camera is just as good as the one on the Allview P8 Energy, or maybe a bit better. It’s clearly better than the camera on a Galaxy S4 or iPhone 5 for example.

Now we move on to the video capture, where we recorded in MP4 format, in Full HD, at 30 FPS and with 14-16 Mbps bitrate. The first video we did was shaky, but had OK clarity and quality, plus realistic colors. The second video has so-so exposure, it was shaky and registered quality loss when zooming in. Colors were pretty realistic.

The third video was took dark even for 1 PM and once again had poor stabilization, but the clarity was good enough and so were colours. I’d say that the video capture is above average, compared to other Allview devices, but it’s too bad for the poor stabilization. At least it films better than the ASUS ZenFone 2. Editing is done with the usual filters, crop, rotate options and functions like mirror, exposure, vignette and more. 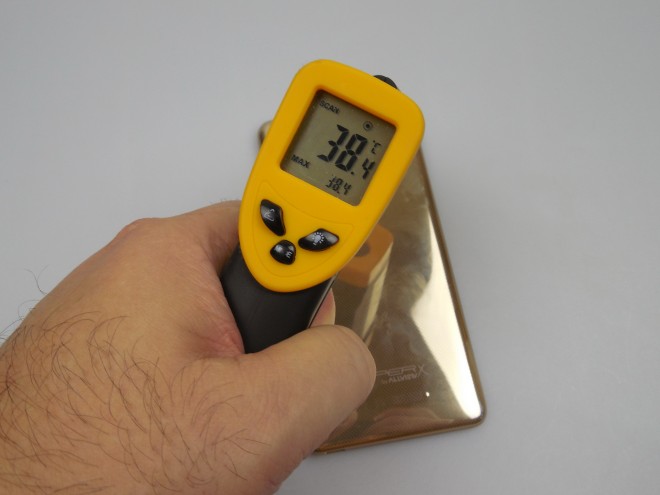 We did a temperature test, by playing the game Riptide GP2 and only got up to 38.4 degrees Celsius, so there’s no overheating here. The web browser on board is fast and comes with HotKnot functionality, while on the input side of things there’s a stock Lollipop keyboard, that’s comfy and well spaced. As far as connectivity is concerned, the Allview V2 Viper X has a Black List feature, a Speed Dial function and comes with dual SIM slots, HD voice and 4G LTE.

There’s an USB Type C port here and HotKnot, but no trace of WiFi a/ac support or NFC. The calls are loud, signal is good and the same calls are pretty clear. Benchmarks had us comparing the Gionee Elife S Plus/ Allview V2 Viper X with the HTC Desire 820 and Huawei Honor 4X, as well as the Sony Xperia Z3. The battle is waged between a MediaTek MT6753 processor + 1.5 GB of RAM, a Snapdragon 615 + 2 GB of RAM, a Kirin 620 + 2 GB of RAM and a Snapdragon 801 + 3 GB of RAM.

Here are the results:

Overall, this model wins 3 out of 11 tests versus the Sony Xperia Z3, 6 against the HTC and 9 in front of the Huawei. The benchmark results are quite OK and the handset has no lag. The UI is fluid and games such as Riptide GP2 run without a problem. As far as the OS and UI go, there’s Android 5.1 Lollipop here with some customization. 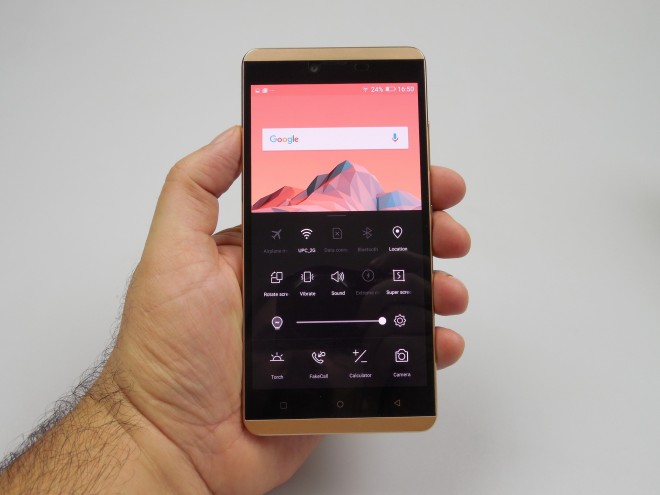 For example, the multitasking is not the stock one and we’ve got a RAM meter and no carousel to speak of. There are thumbnails instead. Widgets and effects are in their regular spot and the dropdown area still features notifications only. Quick Settings are accessed by swiping up. It allows access to the connectivity options and 4 app shortcuts, plus a brightness slider.

There’s no bloatware here, so that’s taken care of. Now it’s time for the verdict!

This model stands out through the fact it’s a shiny golden thingie, that may tempt people who are vaguely superficial or try to be that. Under that shiny shell there’s a good midrange phone, that does have its small quirks. However, the battery is very good for the price you pay and even if you’re not getting 3 GB of RAM or a new gen CPU, performance is flawless.

It’s a very good alternative to a HTC Desire 820.