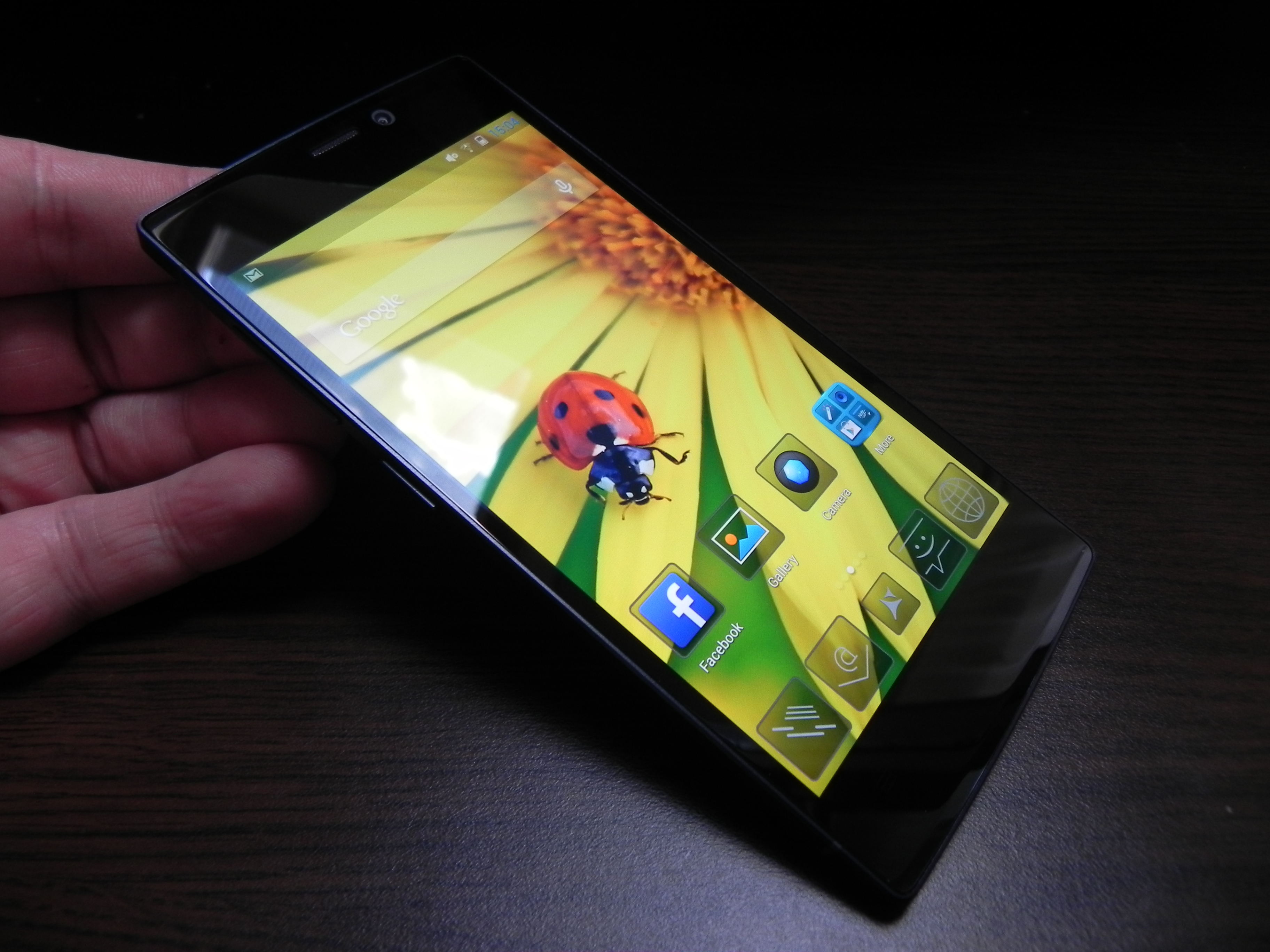 The famous Gionee Elife S5.5, the thinnest smartphone in the world, at 5.5 mm in waistline is available in Eastern Europe, Romania as the rebranded Allview X2 Soul, that we reviewed in the following lines and in the video below. This model debuted a few months ago and it’s priced at around $380 in India for example. 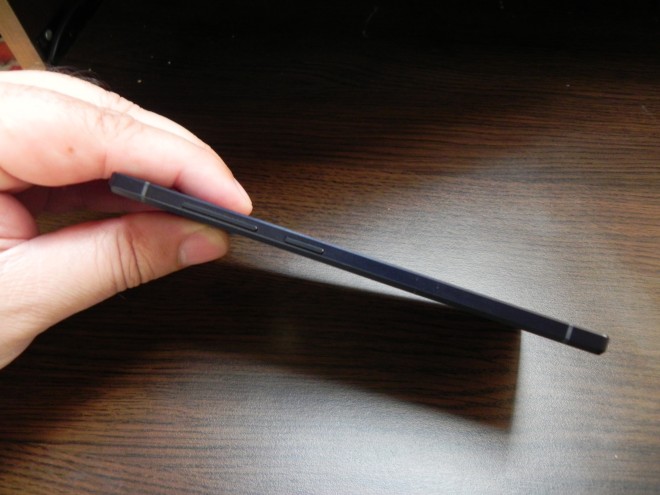 We’re dealing with an ultraslim product, that weighs 129 grams and it’s covered with glass, both at the front and back side, just like the Xperias. The Allview X2 Soul is prone to getting fingerprints all over the glass and grease as well. This handset is very elegant, almost feminine thanks to its slim waistline. The Gionee Elife S5.5 is made of premium materials, basically relying on metal and glass for 98% of the body. There’s Gorilla Glass 3 protection both on the front and back and on the sides we’ve got an aluminum frame.

The front glass of the smartphone measures 0.55 mm in thickness, while the back one is 0.40 mm thick. This handset adopts an angular design, focused on straight lines and it’s surprisingly enough not slippery. Its grip is pretty good and we’ve got narrow screen edges here. The front side of the handset offers the usual 3 capacitive buttons, a front cam and earpiece, as well as an ambient light sensor and a proximity sensor. On the left side there’s the On/Off button and volume buttons, that are pretty thin, but they’ve got good feedback. 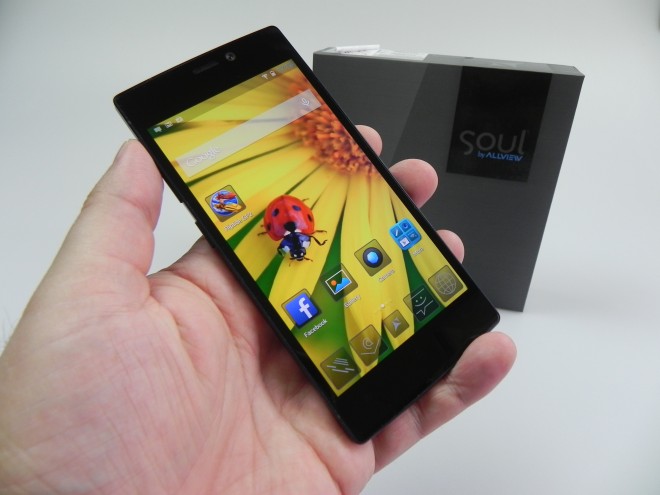 On the right side there’s the microSIM card slot, that can be accessed using a small metallic key. At the top there’s the microUSB port and finally at the bottom we’ve got the audio jack and microphone. The back side only features the main camera, speaker and an extra mic. We like the design of the Allview X2 Soul/Gionee Elife S5.5, probably the hottest ultraslim model we’ve seen this year.

On the hardware side, we get a Super AMOLED 5 inch screen with Full HD resolution, OGS tech and this panel is actually made by Samsung. Inside there’s an octa core Cortex A7 MediaTek MT6592 processor, clocked at 1.7 GHz, while the GPU is a Mali 450 MP unit at 750 MHz. Allview X2 Soul relies on 2 GB of RAM, 16 GB of storage and it has no microSD card slot. At the back there’s a 13 MP shooter with a Sony sensor, while upfront there’s a 5 megapixel selfie cam. 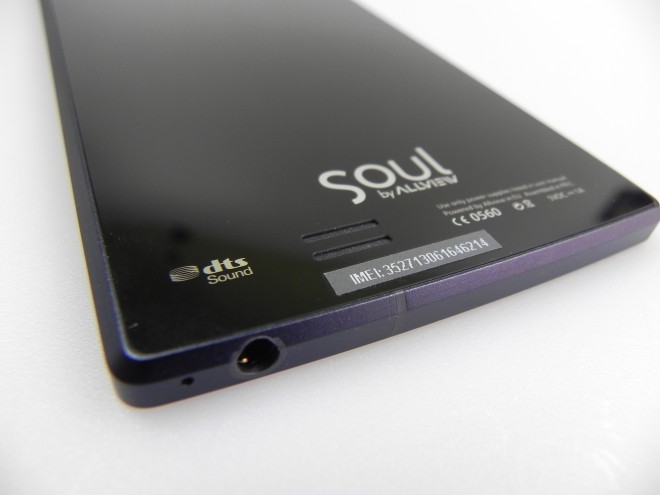 As far as connectivity goes, there’s FM radio with RDS, HSPA+, Bluetooth 4.0, WiFi Direct, WiFi Display, HD voice, microUSB 2.0, GPS, 3G video call and WiFi 802.11 b/g/n. Finally, there’s DTS acoustics, an accelerometer, gyroscope and digital compass. The battery here is a 2300 mAh unit, a Li-Ion SDI unit, that on paper provides 10 hours of talk or 9 days of standby functioning. In our video playback test with WiFi on and brightness at 50% we reached about 2 hours and 51 minutes of playback, which is kind of weak. Obviously the battery was sacrificed for the sake of a slimmer figure.

The battery also provides about 3 hours of gaming and lost 32% when we took 100 pics in the park. Charging takes 2 hours and 23 minutes and there’s also a special CPU Power Save option in the Settings, reducing CPU usage. We’ve got a bundled Power Manager app, that will allow you to choose a certain battery percentage to activate the power saving functions, like WiFi off, GPS off, vibration off, data trafic off and more. Screen timeout can also be set up and there’s even a specia power saving mode for the night. 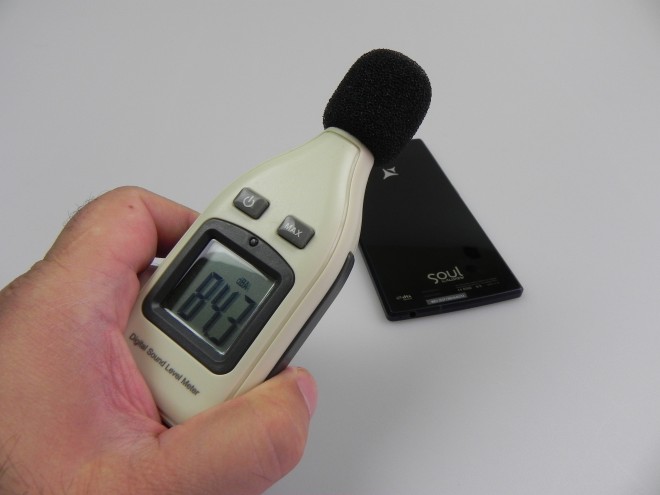 Now moving on to the acoustics, this is where a bunch of Yamaha amplifiers enter the scene, together with Digital True Surround technology. There’s also a music player on board that’s similar to the one of the Allview X1 Xtreme, another handset we tested recently. We get a minimalisic UI and also a very simple one. The DTS EQ included here offers features like Focus, Bass or 3D Effect, plus Volume Strengthen and Space Reverb. You can tweak a bunch of presets including Standard, Nature, Surround, Voice and Default, plus there’s a Sleep Timer among the options.

As far as the actual speaker goes, it provides a pretty loud experience, although for the Allview brand’s sake I would have expected a bit more. They usually offer deafening speakers. The voice is warm and the sound tends to be slightly noise at max volume and especially with the strenghten option on. The bass is pretty good and the bundled headphones were a total letdown. They may be comfy, but the volume is very poor and the bass is OK. 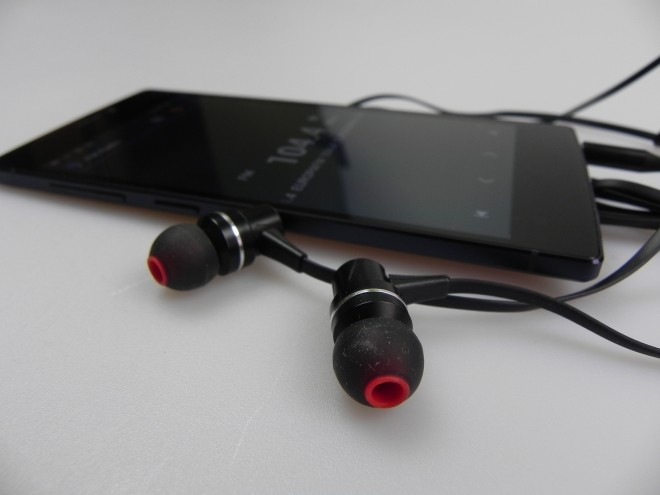 The speaker on the device reaches 84.3 decibels with the speaker towards us or 79.6 decibels on a flat surface. We’re about 10 decibels away from the recently tested LG G Pro 2, so I’d say there’s room for improvement. FM Radio is also here with a recording option. Now let’s talk about the screen a bit: it’s a Super AMOLED 5 incher with 1080p resolution and 441 ppi density. It also has OGS technology and Gorilla Glass 3 protection. It can be used with slightly wet hands or with gloves on and it’s pretty bright and crisp. The colors are vivid, maybe a bit oversaturated, while the view angles are pretty wide.

There’s also a certain je ne sais quois of the screen that makes the images shown on it look as if they’re floating on the screen. It’s probably the Super AMOLED we have to praise here. The video player bundled on the handset offers a sort of Pop Up Play option and comes with DivX support Xvid, AVI and MP4. We’ve got a Pentile Matrix pixel screen here with a diamond arrangement of the pixels, by the way. In many ways, this screen is very much like the one of the Galaxy S4. 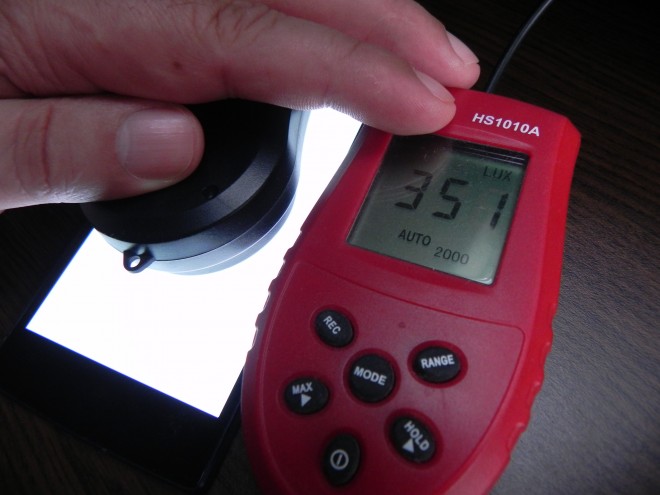 Sadly, this highly praised screen is poor in sunlight, but at least it’s reasonably bright, as we reached 351 LUX units while testing it with our luxmeter, while an Xperia Z2 reaches 366 units, so I’d say we’re doing fine. The black is deep and I’d say that overall I’m pleased with the screen. Moving on to the camera, this is a 13 megapixel unit with a Sony IMX135 sensor, the very same one from the LG G3 and LG G2, plus the Xperia Z.

Upfront there’s a 5 megapixel selfie camera with an OV5648 sensor. The main camera relies on a RGBW system, with an extra white pixel compared to other cams. The sensor measures one third of an inch and it generates 1.2 micron pixels. The UI is basically the same as the one we got on the Allview X1 Xtreme, with two main picture taking modes: Normal and Professional. There’s 4X zoom and the Settings area provides options like Normal Mode capture, HDR, Auto Scene, Sound and Geotag. You can perform a normal capture with the shutter button, or flash a V sign to capture or maybe do a smile detection or tap the screen. 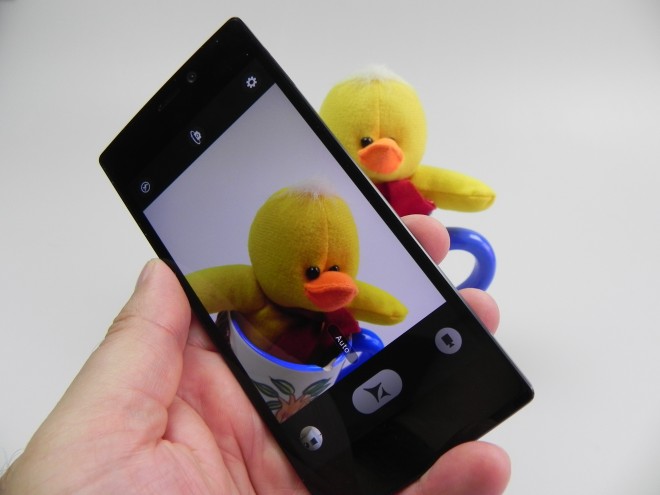 We’ve got a Self Timer as well and the pics are taken in 4:3 at 13 MP or in 16:9 at 12 MP. Other options include Anti Banding and the Professional mode gives you extras like face detection, white balance, ISO, exposure and a leveling meter. The main capture options in this mode are Auto, Panorama, Sports, Night and HDR. The video capture settings include anti shake, geotagging, microphone, 720/1080p resolution, scene modes, timer, white balance and exposure.

As far as the actual pictures taken with the device are concerned, we get some really good shots, without any trace of noise, with excellent clarity and OK brightness. The colors a bit too warm, but the closeups are really good looking. You can take 360 degree panoramas and HDRs will keep both shots you take: both the original one and the one with HDR applied. The photo samples aren’t far from the quality of the Allview X1 Xtreme, that was a landmark for me, even beating the Galaxy S5 in the quality of some shots. 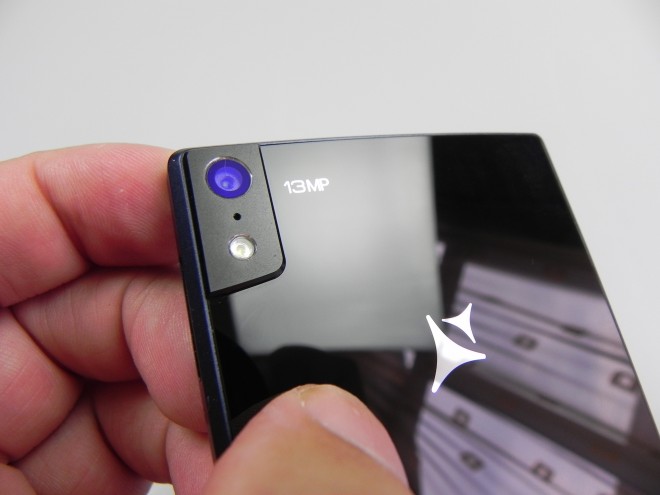 Sadly, the video capture is disappointing here, since we only have the 3GPP format to play with, which means low bitrate. We get about 14 Mbps here and the video captures offer good contrast, but the image is a bit burnt when there’s a lot of sun outside and brightness is exaggerated. The focus is OK and although the video captures are decent, I’m sure they could have been much better, considering how good the photos are.

There’s also a Charm Cam app preinstalled, that offers you functions related to selfies, like fake makeup, lipstick, eye lashes and all that. You can also use this app to put on a fake wig, remove facial imperfections or implement filters. There’s even a special PPT mode, ideal to take pictures of books, flipcharts, blackboards and other such environments. 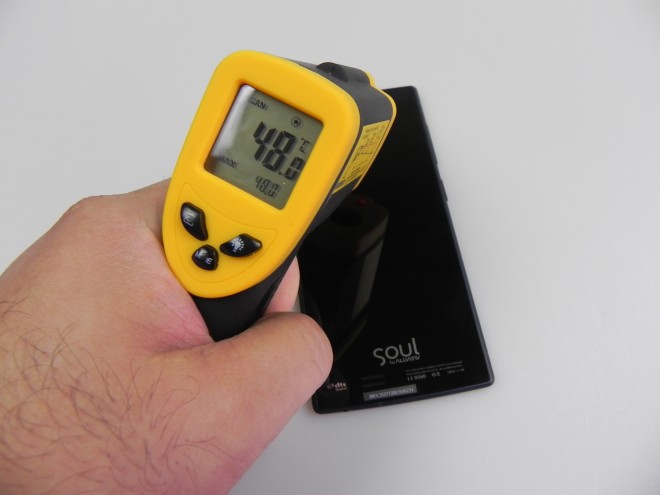 I have to say that the glass is kind of hurting the phone, since it gets very hot, reaching 48 degrees Celsius after 15 minutes of gaming, according to out thermometer. The web browser is fast, the virtual keyboard is comfy and now let’s discuss benchmarks. This model is compared with another rebranded Romanian phone with the same CPU, Evolio X6 and the famous Galaxy S4, that has the display as a common point.

And this is Vellamo:

3DMark matters most to some:

GeekBench 3 had the following scores:

Overall the results are decent for a sub $400 phone and moving further to the Phone section, this device has an earpiece with loud volume and it offers Speed Dial and good signal. The OS is Android 4.2.2, with the promise to get KitKat very soon. The UI is the typical one for Allview, with the usual icons, themes and own backgrounds. In the Setings area there’s an option called Blink Backlight, that will make the backlight shine for 3 minutes to signal missed calls. 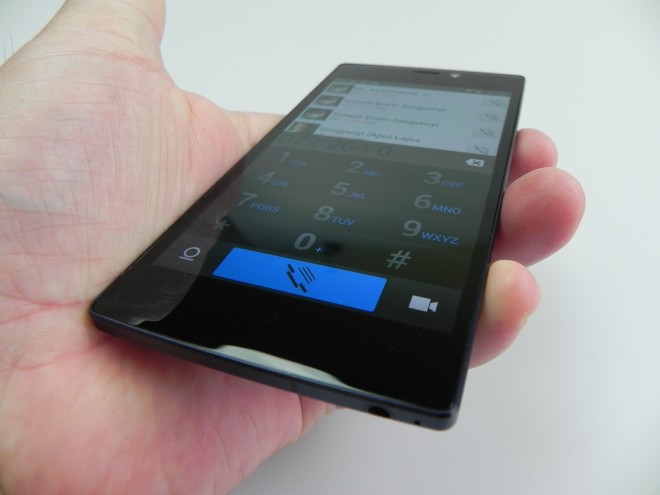 We also get a Suspend Button, that will “float” on the screen and replace capacitive buttons, showing the same features as they serve. Then we’ve got the Guest Mode and Smart Gestures also in the Settings. Smart Gestures include Smart Dial, Smart Answer, double tap to wake up and special drawing gestures on the screen to perform various features and activate apps. 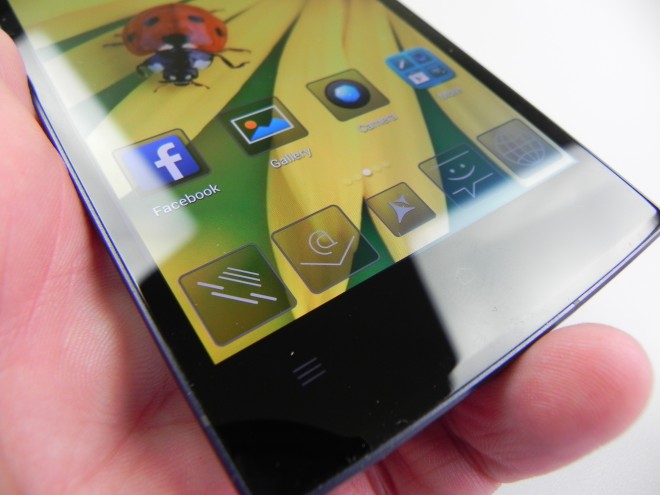 If you swipe to the left in your lockscreen you’ll find an area with special features, including Fake Call. This one starts a pretend call allowing you to get out of uncomfortable situations. Allview X2 Soul comes with a few preinstalled apps, such as Phone Accelerate, wich is a sort of task killer, Weather, Notes, App Manager, Traffic Assistant (like Data Sense), Bitdefender Mobile Security and Sygic.

And now the verdict, the Pros and Cons of the Allview X2 Soul/Gionee Elife S5.5.

Allview X2 Soul gets from GSMDome.com a 9.8 out of 10 for design, a 9 for hardware and a 9 for OS and UI, for a final grade of 9.26 out of 10. This is all about design and beauty with this phone, but also with a few sacrifices, mainly temperature and battery life. Hey, anything for a sexy phone right?