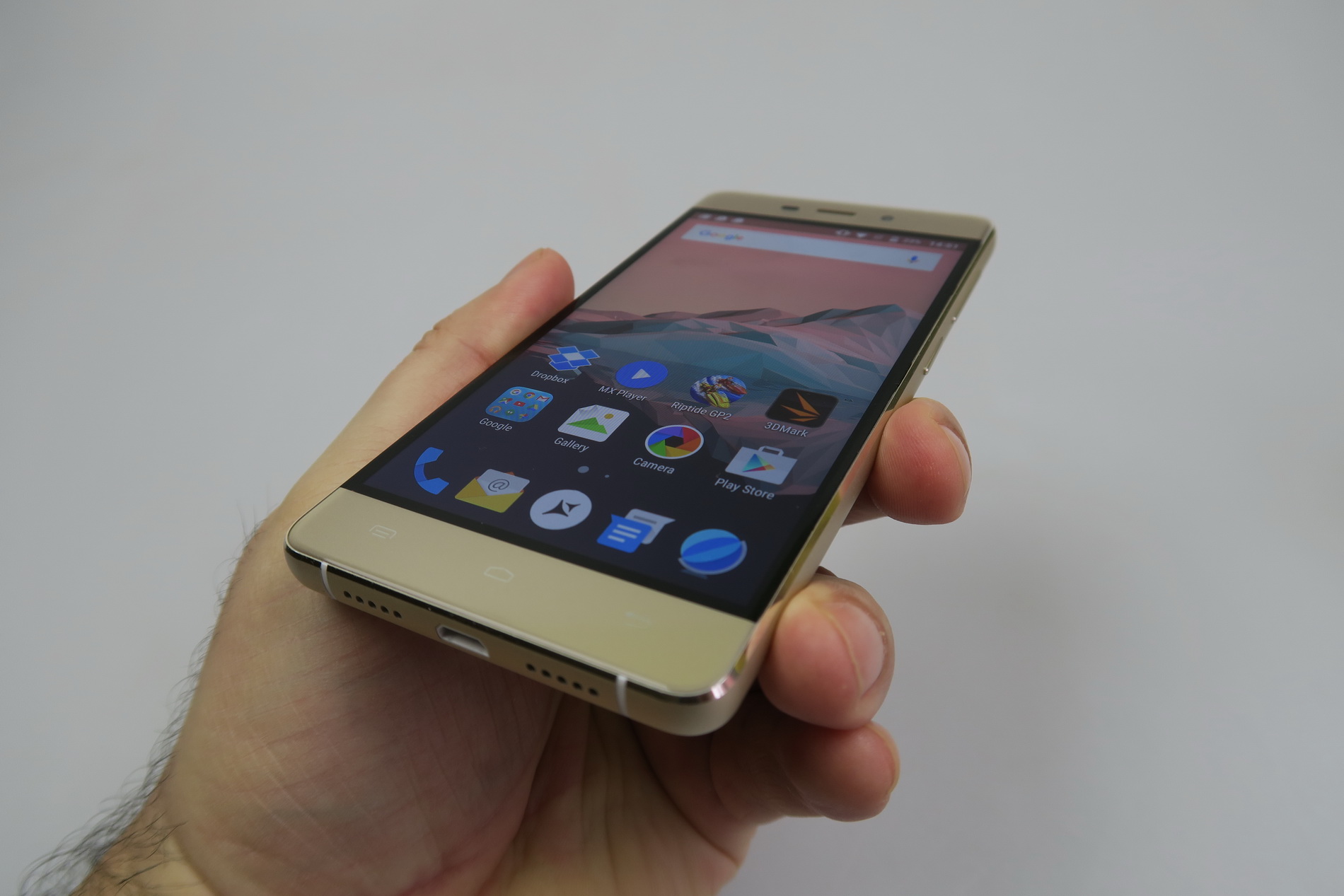 The brand Allview comes from Eastern Europe, Romania and while they usually deal with locally integrated Gionee models, the Allview X3 Soul Mini is a rare bird. Why? Because it seems to be a totally original device and we got a chance to review it below. 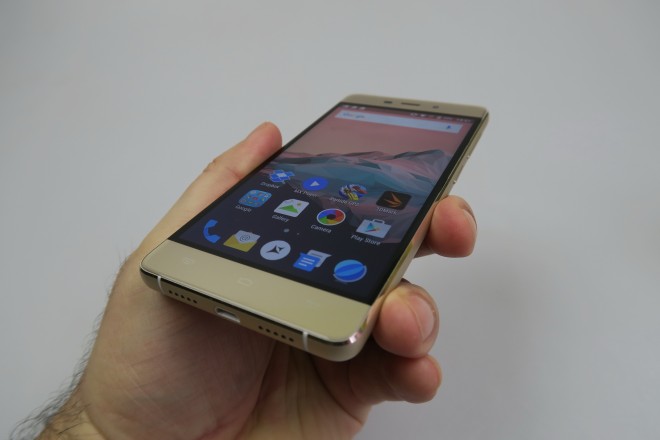 Announced in early February this year, the device is the Mini version of the Allview X3 Soul, which in turn is the integrated version of the Gionee S6. Priced at $208, this model has a very prominent HTC One Mini meets iPhone vibe. It relies on a metal unibody chassis and the back totally looks like an iPhone. It’s a very, very light device and feels as if it were hollow inside.

Measuring 7.2 mm in thickness, the smartphone weighs 129 grams and it’s a bit thicker and heavier than the Galaxy A5 (6.7 mm and 123 grams). It’s a very comfy and elegant phone, with a good grip and easy one hand usage. The design is very easy on the eye and the phone comes in gray, gold and silver. The edges are slightly rounded, thanks to a 2.5D screen panel upfront. 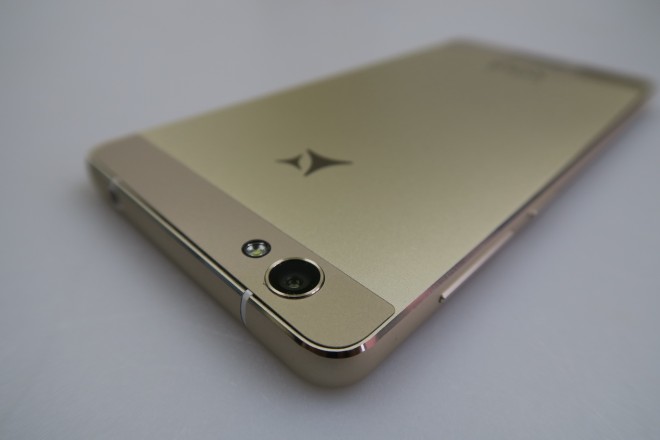 This model is 0.1 mm thicker than the iPhone 6S, but also lighter, so that makes it clear it’s very compact. I’d have to say this is the best looking Allview model yet. On the hardware front, we get a 5 inch IPS LCD screen with a 1280 x 720 pixel resolution, a bright, crisp and clear panel with vivid colors. View angles are wide and the big black edges spoil a bit of the viewing experience.

Contrast is OK for this screen and the pixels are of the RGB Stripe variety. We used a luxmeter to measure the brightness of the display and reached 405 LUX units, which is great, especially since it surpasses the Xperia Z3 and OnePlus One for example. This is a great screen and it also has some special tweaks within the Miravision Settings, including contrast, saturation, sharpness and temperature. 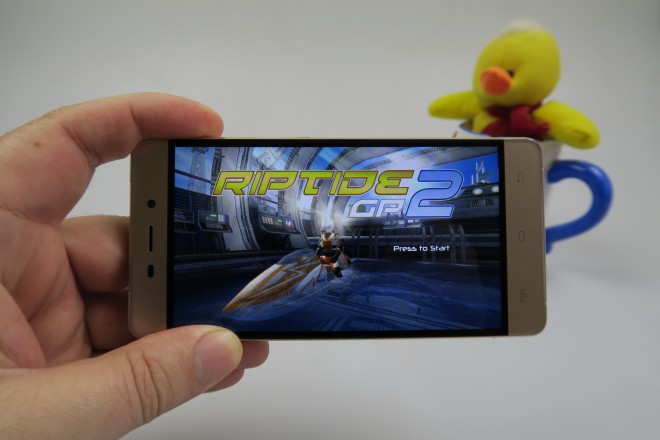 Moving on to the CPU, Allview X3 Soul Mini has a quad core MediaTek MX6735 processor, clocked at 1.3 GHz (64 bit), accompanied by 1 GB of RAM and 16 GB of storage. There’s also a microSD card slot in the mix, with support for up to 128 GB cards and relying on the second SIM slot for it. The handset has no lag, it comes with a fluid UI and games like Riptide GP2 and Mortal Kombat X work just fine on it.

We tested the temperature and reached 34.6 degrees Celsius after playing the game Riptide GP2 for 15 minutes, so there’s no overheating here. When it comes to benchmarks, the X3 Soul Mini surpasses the Galaxy A5 and Huawei P8 Lite, if you really want a comparison. The scores are also similar to another popular Allview model, the X2 Soul Lite, so not bad at all. Here’s a list of scores: 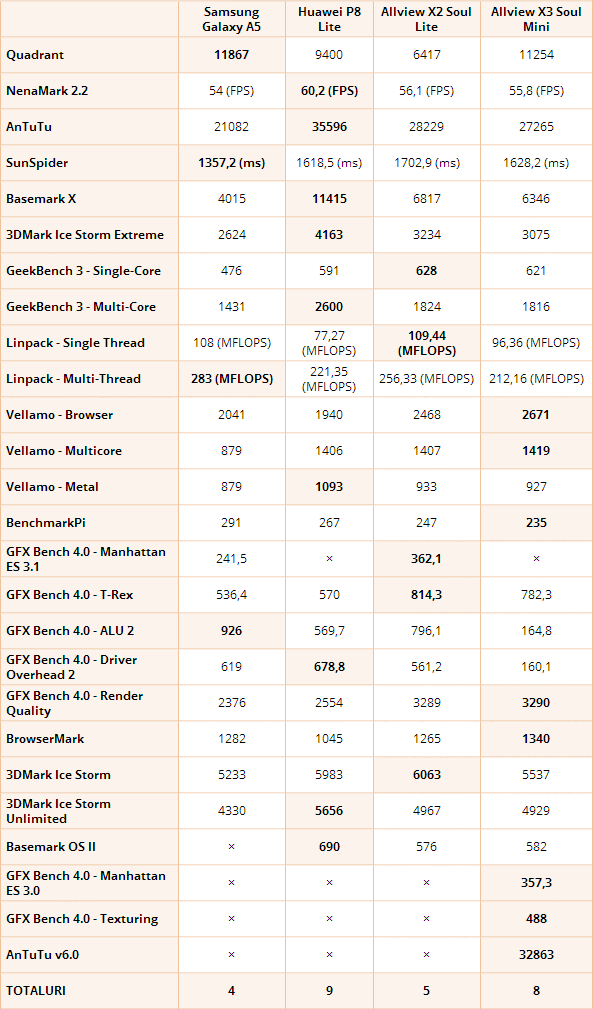 Now let’s talk acoustics! We get here two apps, the regular Play Music and Music, with a minimal EQ. The actual music experience involved the singular right side grille speaker, with the left one being for decorative purposes. I’d say the volume is mediocre, bass and clarity were OK and the high notes were well heard.

We did a decibelmeter test and got to 78.6 dBA when playing a special acoustic sample, but in games we got all the way up to 88 dBA in Riptide GP2, an interesting difference. Special Enhance options are available in the Settings area, both for speakers and headphones, as well as surround. We also have FM radio in the mix and no headphones were bundled.

When it comes to camera, we get a 13 MP back shooter, the same sensor as the one from the Samsung Galaxy S4 apparently, plus a front 5 MP shooter. The camera itself has a slow focus and picture taking and Allview promotes the device through its picture in picture function. The UI is typical for Allview, feeling old school. 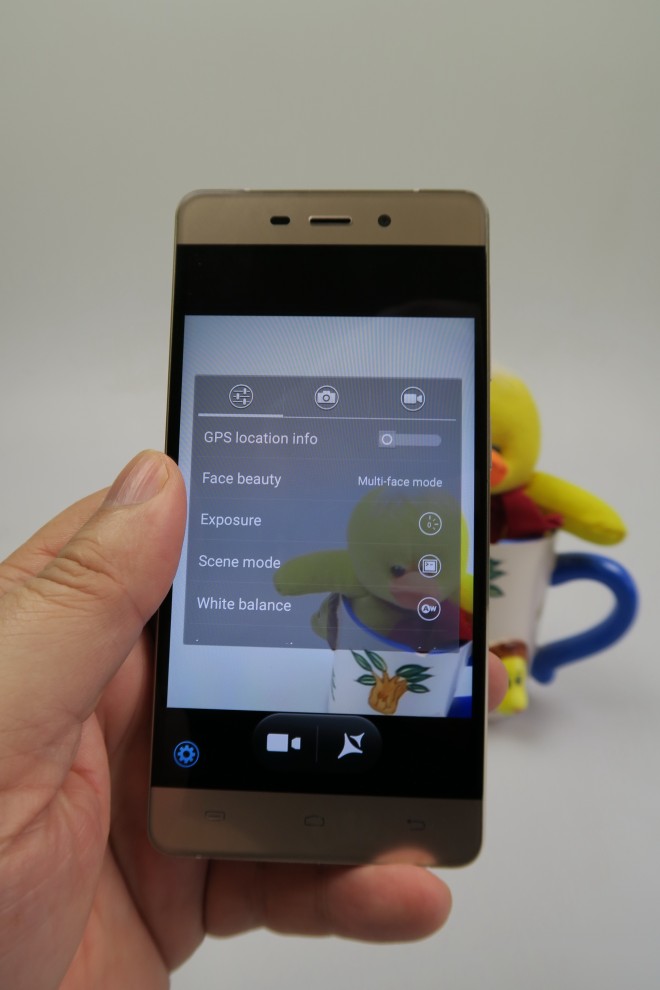 Pictures were taken on a rainy day and HDR felt too white. The colors were very vivid and the pictures were rather blue-ish. Panorama looked good and we did meet some blurry shots. Selfies were quite crisp, but the background was blurry. Closeups looked OK and there were some focus problems and I mean here that you should be patient when focusing and not rush the process. 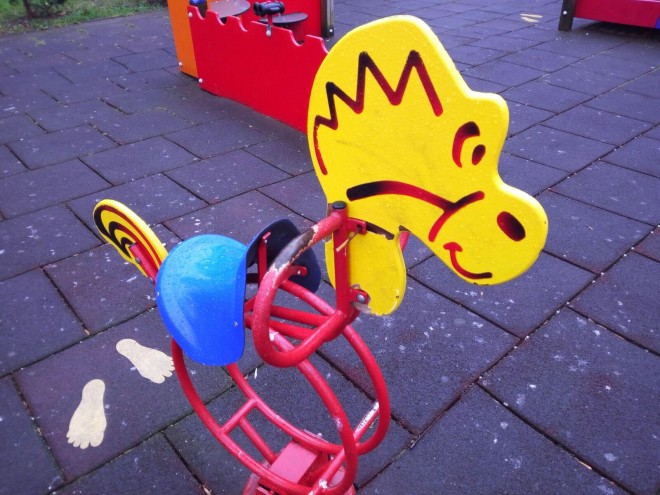 In some instances the colors were strange, like the Coca Cola machine’s red seeping into the environment. I’d say the photo capture is below the Huawei P8 Lite and Samsung Galaxy A5, rivals for this product. However, for $200, they pictures are good enough to post on Facebook. Video is shot in 3GPP format, with 17 Mbps bitrate and it looks a bit shaky and artificial.

Clarity is OK and so is focus and exposure, plus the acoustics aren’t half bad during video capture. Considering the P8 Lite wasn’t much better in this area, I’d say we’re doing reasonably fine. The web browser had a strange feat, with a strange bar at the top and OK site loading speed. This is the stock browser and speaking of stock, there’s also a stock keyboard in the mix here.

Sunspider and BrowserMark tests showed us that the browser is in fact pretty poor. On the connectivity front, there’s a dual SIM setup here, with a nano SIM and a micro SIM Slot. HD Voice is supported and LTE too, with up to 150 Mbps download speed. Bluetooth 4.0 is supported, as well as WiFi 802.11 b/g/n, WiFi Direct and microUSB 2.0. 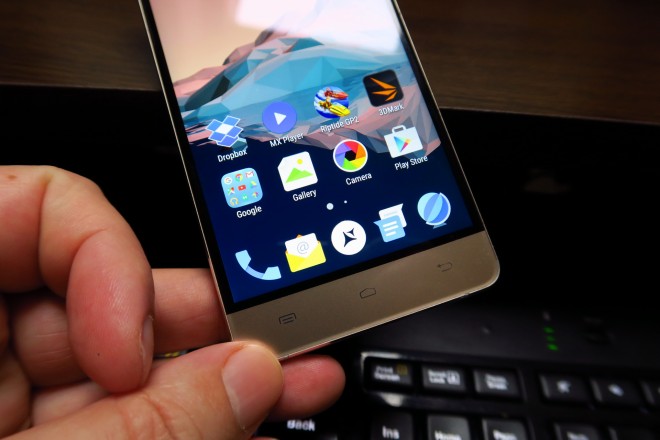 Signal is OK and calls aren’t very loud, but they’re clear. WiFi testing revealed a download speed of 24 Mbps and upload speed of 21 Mbps. The battery is a Li-Po 2350 mAh unit, that provided us with 8 hours and 19 minutes of playback, which is excellent for a 5 incher. It surpasses bigshots like Huawei Mate S and ASUS ZenFone 2. 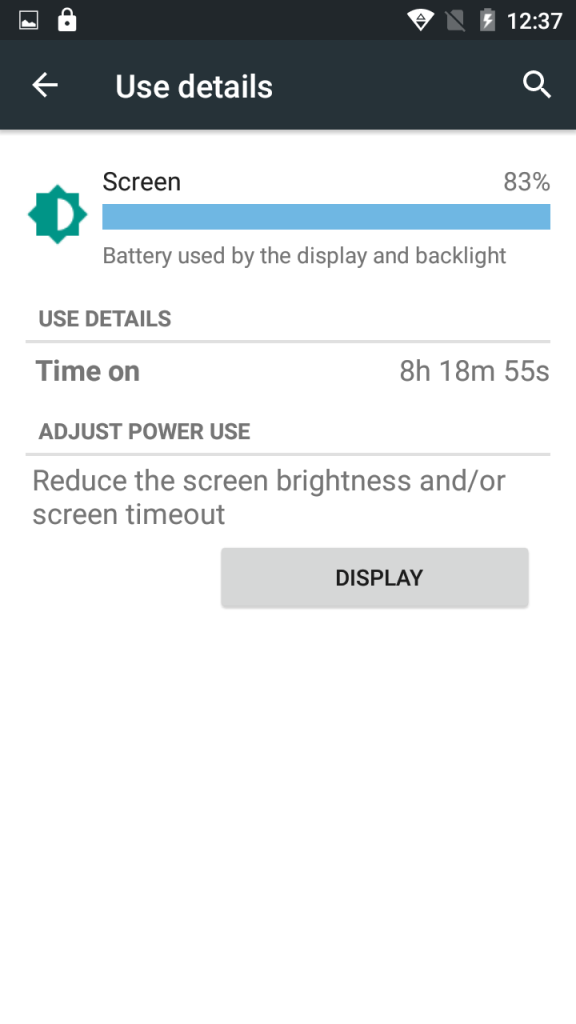 In PCMark we got to 6 hours and 34 minutes, which is also great and we surpassed the OnePlus 2 and HTC One A9 this way. Charging is a bit long, at 3 hours and 38 minutes, but you can leave the device overnight. Time to talk about software! Allview X3 Soul Mini runs a stock version of Android 5.1 Lollipop, with standard widgets, carousel multitasking and a typical dropdown area.

The UI is fluid and we don’t have big bloatware here, with 41 apps preinstalled. There’s Bitdefender Mobile Security, Themes and 90% of the rest of apps are stock ones. Time for the verdict now! 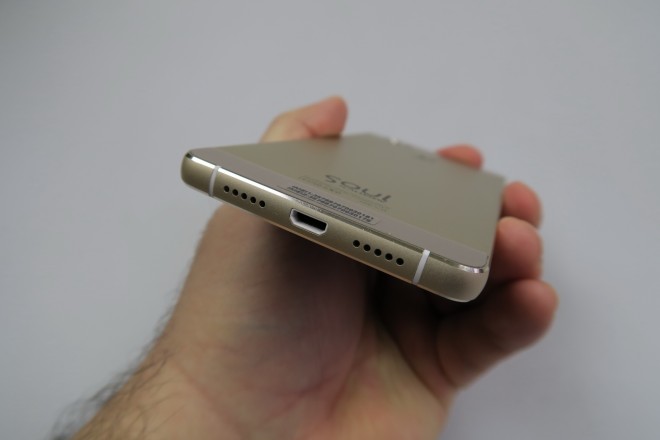 Allview X3 Soul Mini is a great compact phone, that has design, battery and display on its side. It’s a slightly feminine phone, without lag and with good selfies. Too bad for the general camera colors and charging time, otherwise it’s a top notch 5 incher. You can get the phone here.