We all know that Android 2.2 is the new and loved kid on the block, thanks to the innovation it brings, but is it able to take on iOS 4 and its promise? Apparently yes, or so say a bunch of JavaScript benchmarks that were recently done with the aid of a Nexus One unit. 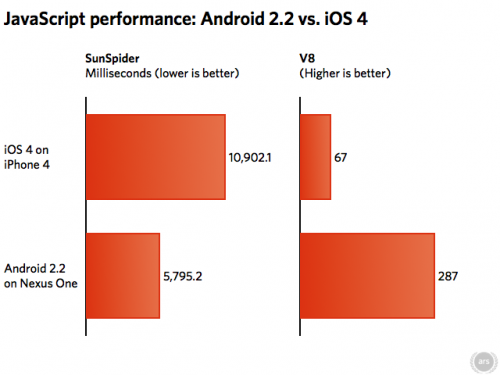 Froyo comes with many improvements, specially when compared to its predecessor. The enhancements include a high performance JIT, deep browser optimizations and much more. A recent Ars Technica test on a Nexus One measured the JavaScript performance in Froyo, based on SunSpider and V8 benchmarks. They show that JavaScript’s execution on the platform is three times faster than on Android 2.1.

When compared to the tests done on Apple’s mobile Safari and the iPhone 4, Android 2.2 came out victorious, with three times the score of its rival on V8 and twice the performance of iOS 4 on SunSpider. Apple has to revamp that mobile Safari, if it wants the crown in the browsing segment.