Today in Hong Kong Google unveiled officially the next Android version, Ice Cream Sandwich, together with the Galaxy Nexus handset. This is the first model that will run the new OS, that you saw in full detail here. And now let’s talk about the new and improved Android version. 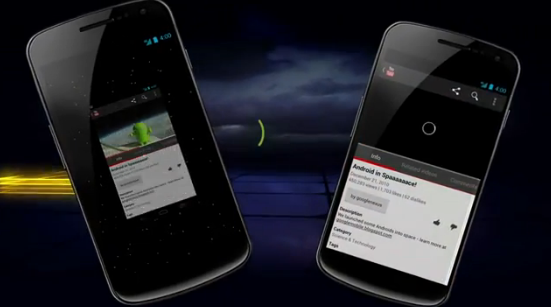 Android 4.0 Ice Cream Sandwich is a combination of Gingerbread and Honeycomb features, as previously predicted. It comes with “awesome design principles”, or so claim people who have seen it in action. Andy Rubin, Android’s father figure and the Senior VP for Google Mobile stated today that the new OS comes with a great deal of innovation, especially in the new features such as Android Beam and Face Unlock.

Galaxy Nexus will be the first phone to run this OS, but I bet that we’ll soon see it on a bunch of tablets and smartphones. If you want to know what’s coming to your device, here’s a list of features to expect in Android Ice Cream Sandwich:

– Roboto font used in the entire OS
– the lockscreen has been improved and now there’s a facial recognition unlock feature
– physical buttons have been replaced with virtual buttons, that are hidden when watching videos
– the widgets are resizable and drag and drop-able
– folders are better organized and have drag and drop support
– you can toss out menu items with a flick gesture
– screenshots can be taken directly in Android (power + volume buttons)
– voice to text feature
– better tabbed browsing in stock browser
– enhanced interface in Gmail, Calendar and a bunch more apps
– Android Beam NFC transfer function
– panorama shot in Camera section
– faster camera app with zero shutter lag
– People app with social networking integration
– Google+ integration

With all of these features here, especially the facial recognition detailed below, are you ready to purchase a new Android 4.0 device or waiting for the update?