Well, count this move as a predictable one: Android surpassed the iPhone in US web traffic, which is pretty logic, considering the different types of devices running Google’s OS. AdMob is the company providing the statistics that lead to this conclusion, having just released the metrics for March. 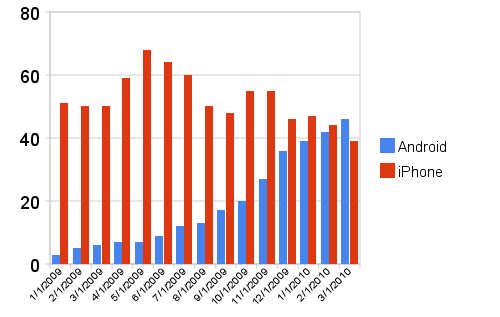 The highlights of their report include the fact that HTC Dream and HTC Magic, two Android phones stood for 96% of all Android traffic in September 2009. 7  months later, 11 Android devices got the same percentage of Android traffic, in AdMob’s network. It’s important to mention that Motorola Droid is the leading Android phone in March 2010, generating 32% of worldwide traffic on this platform. 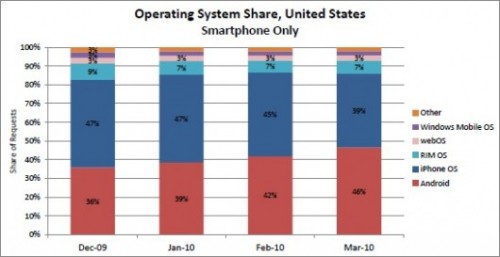 Google Nexus One only managed to generate 2% of said traffic in March. In the US, the top 3 Android handsets are Moto Droid, HTC Dream and Motorola CLIQ, while in the UK, the top 3 goes something like this: HTC Hero, HTC Dream and HTC Magic. As far as the OS versions are concerned, Android 1.5 got 38% of the traffic, followed by Android 2.0/2.1 with 35% and Android 1.6, with 26%.

The choice of the public is clear: low end devices, since 92% of Android web traffic in March 2010 came from handsets with a CPU slower than 600 MHz. More info can be found in AdMob’s report.