It’s early 2017, so it’s recap time, with AnTuTu unveiling the highest performing smartphones of 2016, as far as benchmarks are concerned. The results are pretty predictable, considering the raw power of the iPhone 7 models and the OnePlus 3T, which top the charts.

AnTuTu mentions that it has removed cheating scores, in order to provide more accurate results and we appreciate that. They also introduced a new factor, called score stability, which is a reference factor of the scores in the summary. They also analyzed the so called “Balanced Mode” and “Performance Mode”, that some devices have and kept their performance accurate. 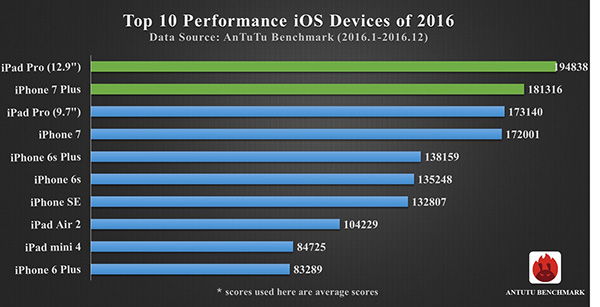 Predictably the Android top 10 is dominated by OnePlus 3T, then LeEco Le Pro 3 and somehow the Moto Z and then OnePlus 3. I’m shocked to not see Snapdragon 821 models there, like ZenFone 3 Deluxe or Google Pixel XL, but such is the optimization… The big winners here are Apple, Xiaomi and OnePlus, each with two devices in the general top 10.