Apple apparently has enough spare cash laying around to purchase both HTC and Nokia, plus an extra to buy the troubled RIM and the new branch Motorola Mobility. This deduction comes from Asymco’s Horace Dediu, who did some calculations and the result is something like the graph below: 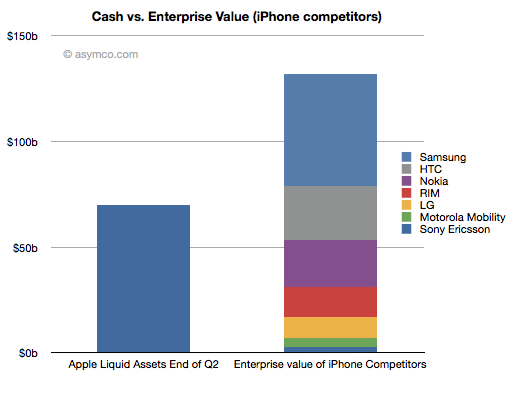 The number uses are the current enterprise value of Apple’s rivals versus the liquid assets of the Cupertino giant. This series of calculations show what a great power Apple has become over the past 4 years. At this time it’s only Samsung that stands in the way of Apple purchasing the bulk of the mobile industry, that’s certainly a scary perspective of monopoly.

These four players we mentioned are the manufacturers that sell 75% of all handsets worldwide. Nokia is worth $22.6 billion, while RIM stands at $13.8 billion, HTC at $25.4 billion and Motorola Mobility at $4.2 billion. Sony Ericsson, Samsung and LG are tougher to estimate value-wise, but they have been assigned their own piece of the pie, according to trailing operating profits.

At this time Apple has a liquid assets of $70 billion, surpassing the value of its rivals combined, except for Samsung. With the current type of growth, the Cupertino company could purchase its rivals without too much difficulty before 2015 comes…