Apple has relied on Intel till now for its microprocessors, at least those used in notebooks and desktop personal computers, but soon they might switch to AMD. The company’s officials were recently seen chatting with Apple bosses and we expect their solutions to reach devices like notebooks and workstations. 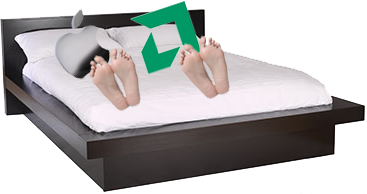 We have to mention that the Cupertino giant encountered some issues while working Intel, like limited availability of new processors and the block of a partnership with Nvidia. Thus, Apple was forced to use Intel’s limited integrated graphic chips on new MacBook Pros, because Intel fought against Nvidia. AMD is the owner of ATI, a company making graphics chips still used by Apple on some of its products.

A large array of CPUs and component options can make Apple’s products more varied and give the public a wider choice, which is good on the current crowded computer market. There’s another theory, stating that Apple want to keep Intel in the game, so they let this rumour fly, in order to get better prices. If AMD delivers almost the same performance with its chips, at a lower price, then they’ll probably work with Apple.