Apple has become every handset maker’s nightmare over the past week, as it has started showing the media each and every major smartphone that has the slightest of signal issues. They’ve picked on HTC Droid Eris, Nokia N97 mini, they’ve criticized Samsung and now Motorola must suffer. And to think that Apple and Moto are both American companies… 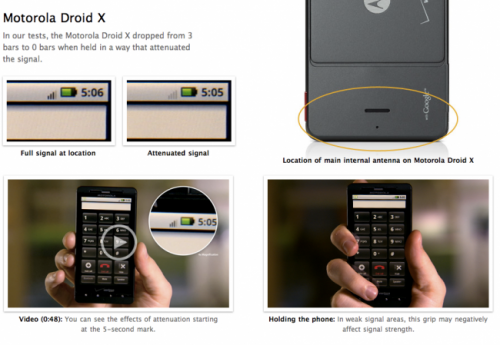 Steve Jobs might have noticed that Droid X is getting quite a lot of praise and coverage these days, so the Cupertino company he runs published another smartphone bashing directed towards this model. As you can see in the video below, the “Death Grip” takes effect on the new Moto Droid, apparently because its main antenna is placed at the bottom of the handset.

Intomobile claims that their Droid X doesn’t behave the same way as the unit in the video, while the iPhone 4 does… We’re waiting for Moto’s reply right now.