The eternal inside source Eldar Murtazin now has the scoop on the new ASUS Eee Pad Transformer tablet, that will apparently be the only quad core slate this year, with an avalanche of such products coming in 2012. Eldar is claiming that the Eee Pad Transformer 2, also known as the Eee Pad Prime will be the first and only Tegra 3 model in the following two months. 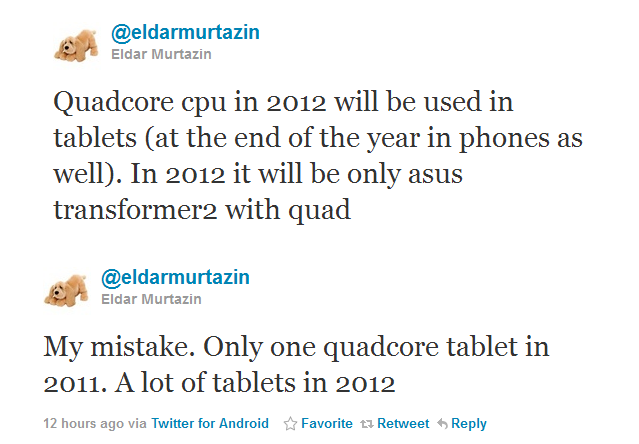 Last I heard this model was scheduled for a Fall unveiling, but problems with the Tegra 3 CPU created a small delay. Eldar is also sure that 2012 will be all about quad core, although not so much Nvidia, but more Texas Instruments solutions. LG, Motorola and Samsung are most likely cooking up their own quad core products right about now.

ASUS has the upper hand here, since they’ll be the first to increase the number of cores inside the CPU of a tablet, but that comes with a price: the risk of having bugs and all sorts of problems, like pioneers always do. The good thing is that Tegra 3 will supposedly offer great battery life, so the new Transformer might actually be a good product, like the first.