You’ve heard a lot of talk about the ASUS PadFone, the famous hybrid between a phone and tablet… Well, here it is in the video below, previewed by our sister site, Tablet-News.com. The handset part of this hybrid looks particularly appealing, with a metallic edge around the handset, a very clean facade and a nice insertion mechanism for the tablet. 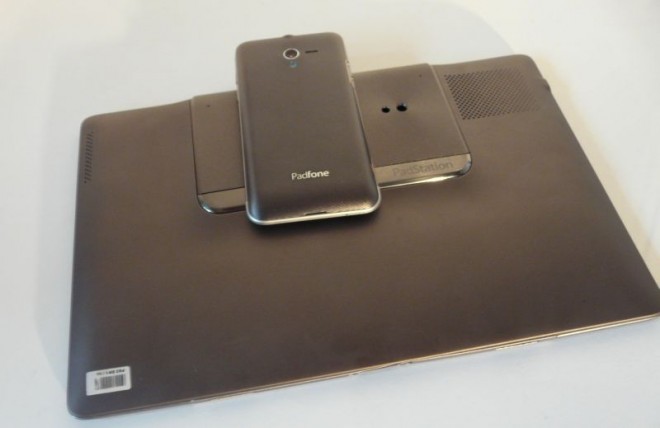 The combo between the two will set you back 699 euros, if recent rumors are to be believed and the launch is supposed to go down in late May, at least in Europe. Aside from the tablet and handset, you can attach a keyboard dock to the device, that is rumored to cost 149 euros. The PadFone handset features a 4.3 inch Super AMOLED display with qHD resolution, an 8 megapixel camera at the back and a Snapdragon S4 dual core processor at 1.5 GHz. That’s actually the CPU powering both devices, once the handset is inserted into the tablet.

The PadFone measures 9.2 mm in waistline, it weighs 192 grams and it felt extremely light in the hand of the Tablet News folks. Its battery is a 1.520 mAh unit and while it may seem feeble considering that the Droid RAZR MAXX has twice the capacity, know that the PadFone Station tablet will increase its capacity 5 fold and with the dock it goes to 9 fold. Over the following days Tablet News will also offer a review for this prototype, so stay tuned!