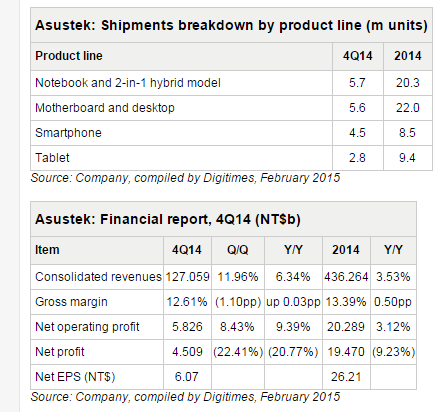 While other big companies released their Q4 2014 financial details one or two weeks ago, it’s time for ASUS to unveil its figures this week. Asustek Computer registered a new profit of $143 millions for the last 3 months of 2014, which is a 22.41% decrease on quarter and a 20.77% decrease on year.

The main reason was the loss of millions of dollars caused by the foreign exchange, according to the company. Notebook and 2 in 1 models stood for 56% of the Q4 2014 consolidated revenues, while smartphones brought in 14%. DIY motherboards and graphics cards generated 11% of the revenue and tablets only 8%. 44% of the consolidated revenues came from the Asia Pacific region and 31% from Europe.

North America and Latin America generated 25% of income. For the whole of 2014, ASUS moved 8.5 million phones and 9.4 million tablets.  The company wants to ship 22 million notebooks and 2 in 1 hybrids this year, as well as 3.5 million desktops and 20 million DIY motherboards. For smartphones they have a big aim: 17 million units, while tablets stand at 10 million. Seeing how solid the ZenFone 2 and ZenFone Zoom are, they are capable to generate a few millions of units sold on their own, but let’s see if the prices are appealing and marketing does its trick…