ASUS ROG Phone is here! We have it for unboxing purposes and it’s truly a beast of a gaming phone. At least as far as the box design is concerned and also the handset’s back side. I find it interesting that the box seems Star Wars inspired and the back of the handset feels like a Star Trek Borg ship. The handset is priced at around $1000 and we unboxed it below.

It certainly has the ROG identity printed all over it, on all the small boxes and tidbits. The handset also has quite a few rivals, like the Razer Phone 1 and 2, the Nubia Red Magic and Xiaomi Black Sharks. Inside the box there’s the USB Type-C cable, headphones, a hefty charger, an Aero Active Cooler, manual and SIM key. From what I’ve heard you could also receive a bundled ROG case. 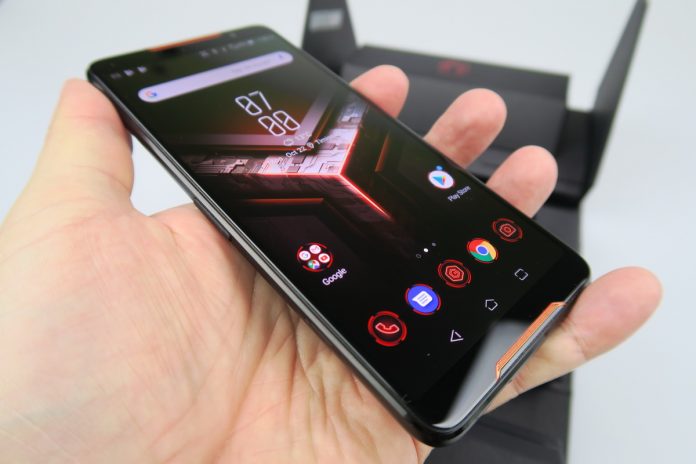 The device is covered in metal and glass, so niftly combined that you don’t know which is which. There’s 2.5D and 3D Gorilla Glass here, diamond cut and with highlights. There are also copper details. The CPU inside is actually an interesting affair, since it’s the highest clocked Qualcomm Snapdragon 845 on the market, at 2.96 GHz. Not even other gaming phones can match that and you’ll see it reflected in the benchmarks.

You’ll clearly notice the two front speakers highlighted by the design, with the promise of excellent amplifiers. Camera-wise, there’s the same package from the ZenFone 5z: 12 MP + 8 MP back shooter with the second camera being a wide angle 120 degree shooter, plus an 8 MP front cam, too. The fingerprint scanner is placed at the back, close to the ROG logo that lights up, plus a special cooling area. 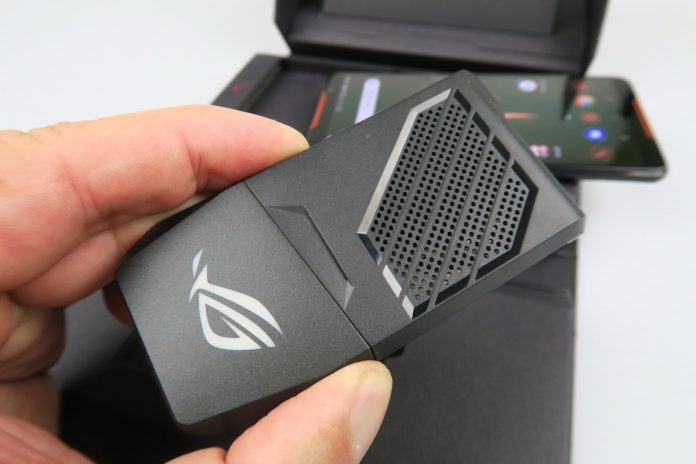 ASUS put here 3 ultrasonic pressure sensitive areas on the device, two on the sides and one extra on the right side to make two shoulder buttons for games, with haptic feedback included. There’s also a special side connector, that lets you hook up the Aero Cooler, which drops a few degrees from your device’s top heating level.

The cooler also offers extra ports, an USB Type-C and audio jack which let you attach headphones and charge the device even when gaming, so the wires won’t be in your way when holding the device in landscape. By the way, the software is also customized, with a special ROG Gaming UI applied on top of Android Oreo 8.1. 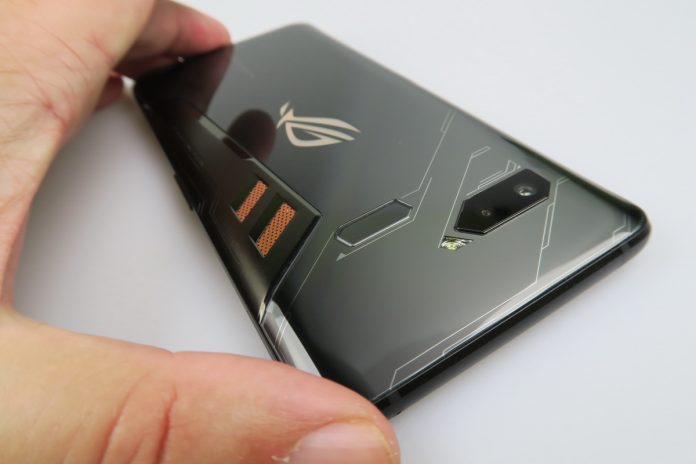 There’s AURA RGB support, tweakable gaming lights, a 3D vapor chamber, 7.1 surround sound and the list goes on and on. Told you this was a beast! You can attach several accessories to this phone, like joystick, a dongle, a desktop dock and more, which expand functionality, make this a TV console and more a portable console (joystick) or even a PC replacement via the desktop dock.

Looking forward to playing Fortnite, PUBG and more on this device. In the meantime you can get it here.