The folks of Crackberry have managed to get hold of RIM’s future plans, courtesy of a glimpse at their future portofolio. It includes devices we’ve already learned about, like Sedona and Bold Touch, plus the appealing BlackBerry Monaco Touch, pictured and detailed below. 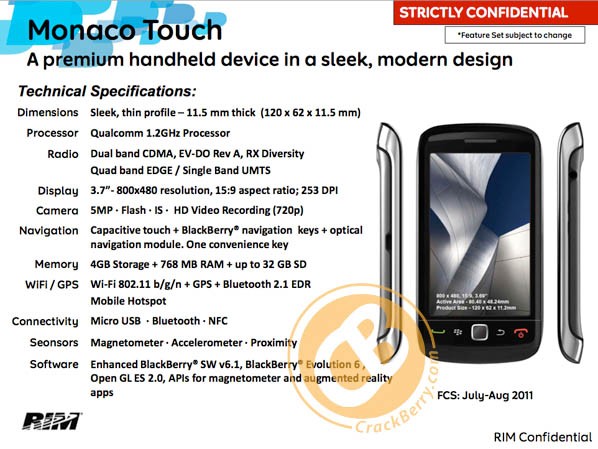 The Monaco is a 1.2GHz smartphone, with a 3.7 inch touchscreen display and a 11.5mm waistline. RIM will be launching a whole bunch of new devices on the CDMA segment this year and even the plans for 2012 are detailed a bit. To take things chronologically, we’ll see a CDMA PlayBook in Q2 2011, followed by the Montana handset, a CDMA version of the BlackBerry Dakota. This handset could be sold as Bold Touch.

You should expect a classic portrait QWERTY design from the new Bold, as usual, plus a touchscreen. The product will most likely be available in Q3 alongside the Monaco mentioned above, basically a more refined Storm model with a 5MP camera with HD video capture. Next up comes a CDMA version of the Apollo aka the Sedona, which is a new Curve handset with support for NFC. 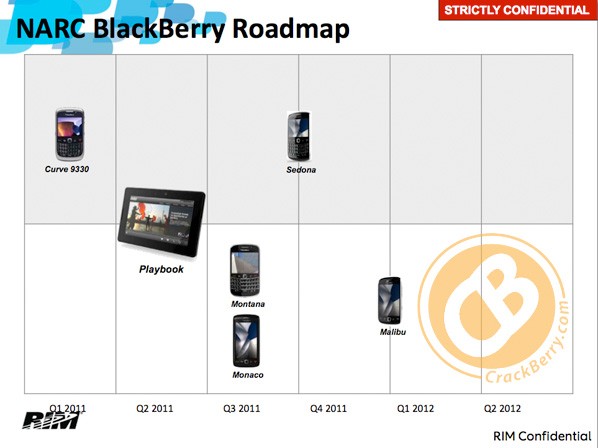 Taking a leap into 2012 we find that early next year a device called the Malibu (codename) will take off and this is considered some sort of full screen Curve Touch. The innovations on the devices mentioned above include feats like HD video capture, NFC, digital compasses, OpenGL support, mobile hotspot and more. BlackBerry OS 6.1 will also be in the mix and we wonder when the switch to QNX OS will happen…