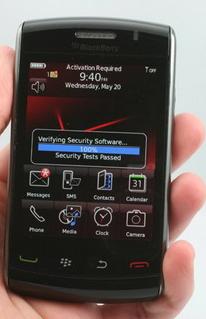 What’s really interesting is that these details were confirmed by RIM and there’s even a launch date announced, October 26th, at least for the UK.

Moving on to the specifications, we discover that BlackBerry Storm 2 supports GSM/GPRS/EDGE/HSDPA connectivity and packs a TFT touchscreen display with Surepress technology, an accelerometer, GPS, a 2GB internal memory, a microSD card slot (16GB cards max) and a 5 megapixel camera with LED flash, autofocus and geotagging.

There’s also a 3.5mm audio jack on board and Storm 2 should also support WiFi, Bluetooth, Java, BlackBerry Maps, Documents to go, Voice Memo and use a media player.