During today’s CES 2012 event Huawei announced the Ascend P1S, that breaks down a new record of phone slimness, thanks to a waistline of a mere 6.68mm, 0.02 mm thinner than the Fujitsu handset that had the previous record. The Huawei Ascend P1 S is pictured below and packs a 4.3 inch Super AMOLED qHD display. 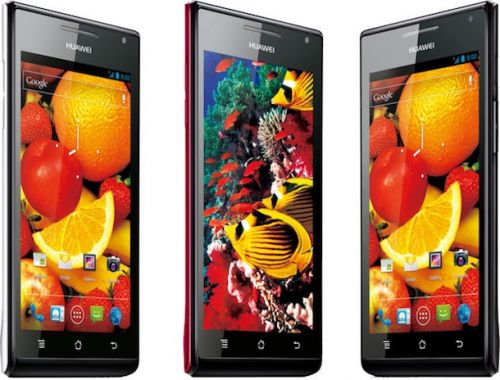 We’re dealing here with a compact smartphone that comes with Gorilla Glass protection, a dual core TI OMAP 4460 processor (1.5GHz) and SGX 540 graphics, plus Android 4.0 Ice Cream Sandwich as the OS. Huawei also unveiled a sister model for this very thin unit, the Ascend P1, that measures 7.69mm  and has similar specs. I must also mention that this very thin smartphone gets a 1670 mAh battery, but there’s also the option of a 1800 mAh battery, probably on the thicker unit.

Huawei Ascend P1/P1 S also prides itself with a narrow body, that measures 64.8mm and a stylish design. We also get a delicate texture courtesy of the PPVD coating and continuing to list the specs we find an 8 megapixel camera at the back and a front 1.3MP HD shooter. The back cam has a dual LED flash and HDR effect optimization. The Huawei Ascend P1 S is able to do 1080p HD video capture with the main camera and 720p with the secondary one. DLNA and quad band GSM/GPRS/EDGE are also available on the handset, that comes with 1GB of RAM, 4GB of ROM, WiFi and Bluetooth 3.0.

The handset will be available in metallic black, ceramic white or cherry blossom pink starting Q2 2012.