The Sony Xperia Z and its twin, the Xperia ZL were two of the hottest devices launched at CES 2013. Now we get an interesting benchmark session with the Xperia Z, shown in the video below. By “interesting” we mean surprising and a bit underwhelming, considering the results. 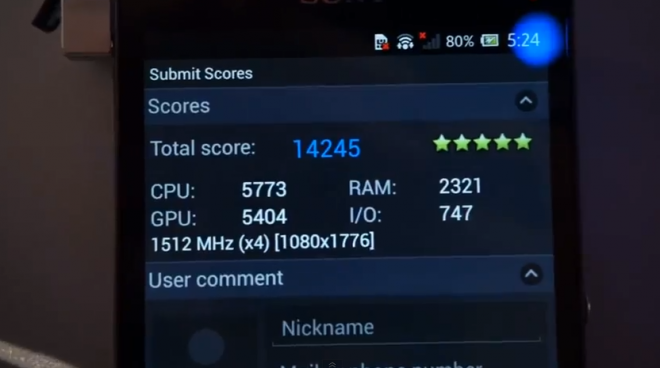 We’ve seen and played with a few quad core Qualcomm CPU-based smartphones and this new model manages to score much lower than those ones. In the video below you can see the AnTuTu benchmark and the Quadrant one in action, with the phone getting 14k points in AnTuTu, which is about 6k lower than the ASUS PadFone 2 I’ve already played with. It’s also more than 10K lower than the Lenovo K900, an Intel Clover Trail+ handset tested recently after its launch at CES 2013.

The Xperia Z runs Android 4.1.2 on a quad core Qualcomm Snapdragon S4 Pro CPU with 2 GB of RAM included. It also scores around 4000 points in Quadrant, that’s also a bummer, seeing how most modern devices are in the 7000s in this test or even 8000. What could cause this? Is it a prototype?