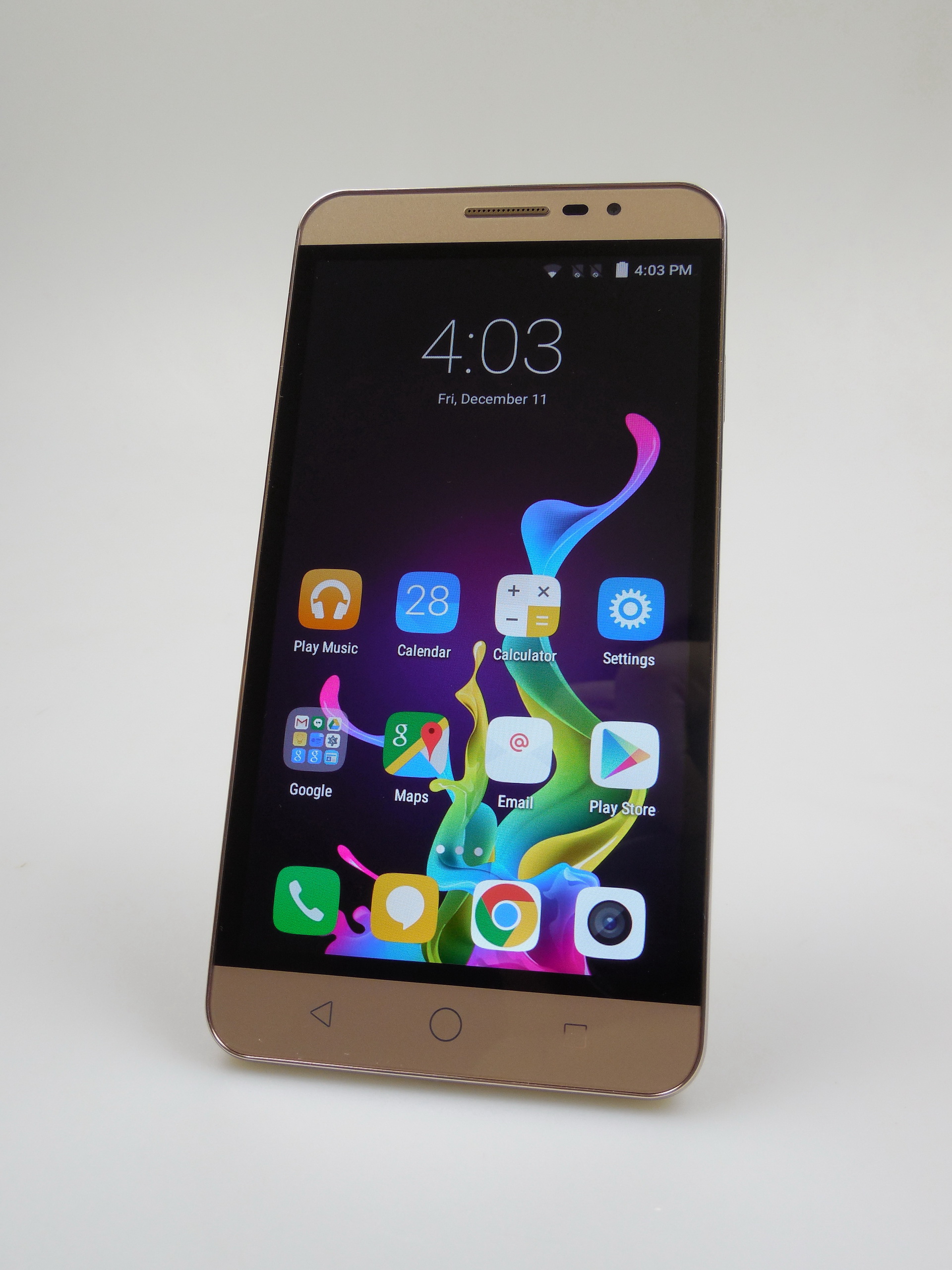 Coolpad Modena is a handset we’ve been testing over the last part of the year 2015 and the device gets a full review below. We’re dealing here with a smartphone made by a company we usually associate with tablets. 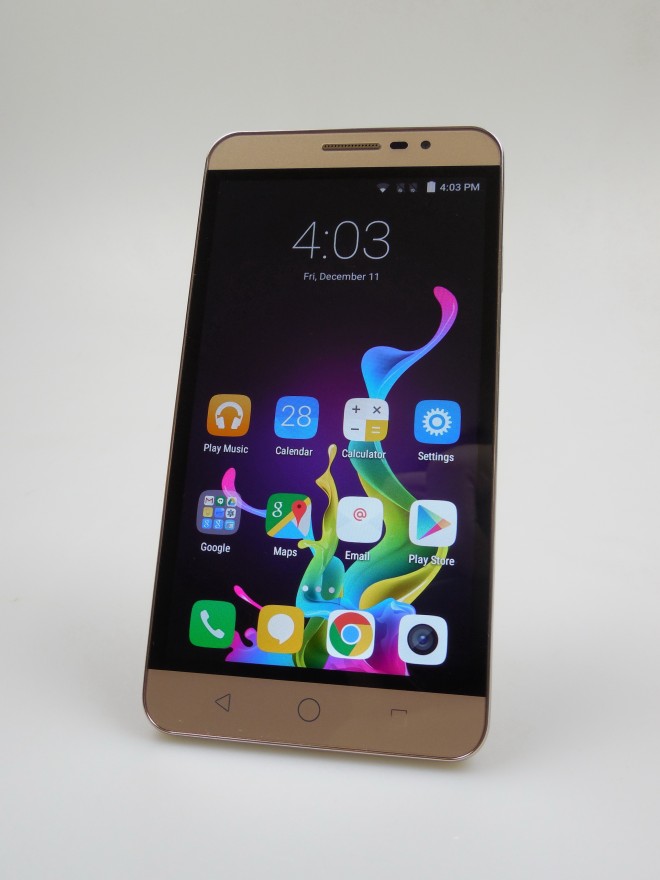 The firm was launched in 1993 and it’s one of the big mobile device brands in China. Coolpad Modena is priced at $160 and it was launched in August last  year. It’s a low-midrange phablet, that feels a lot like a Huawei Mate made of plastic. The plastic material used here imitates metal pretty well and the model comes in white, gold or black.

It has a matte shell, that doesn’t get print smudges on it and it’s a bit on the wide side, but it offers good grip. Coolpad Modena has a thin chrome imitation in the frame area and it’s pretty solidly built. It measures 8.6 mm in thickness, weighs 158 grams and it’s bigger than the Leagoo Lead 1 for example, that weighs 145 grams and measures 6.9 mm in thickness. 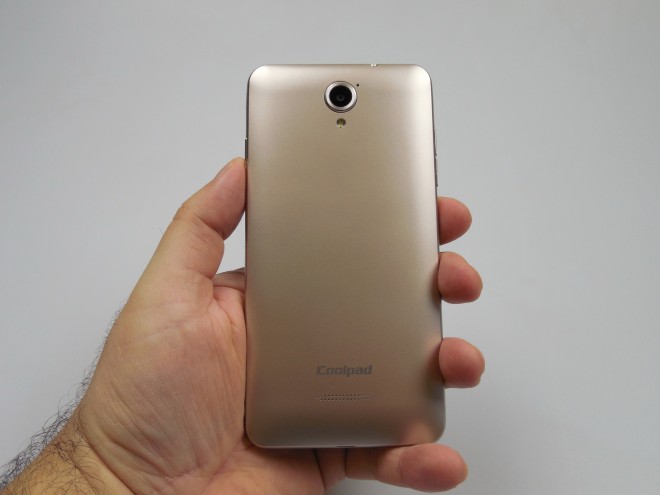 This handset is also more compact than the ASUS ZenFone 2, that has a waistline of 10.9 mm and weighs 170 grams. One hand usage is not very good, since the Modena is quite wide. Upfront we find the screen with big bezels, notification LED, earpiece and front camera, plus sensors and 3 capacitive buttons. The back features the main camera (slightly protruding), microphone, flash and speaker.

Also here is the back lid, that’s not very easy to remove and behind it there are two SIM slots, the battery and microSD card slot. At the top we’ve got the audio jack, while the bottom includes a microUSB port and microphone. Volume buttons are placed on the left and Power button on the right, both of them with good feedback to the press. 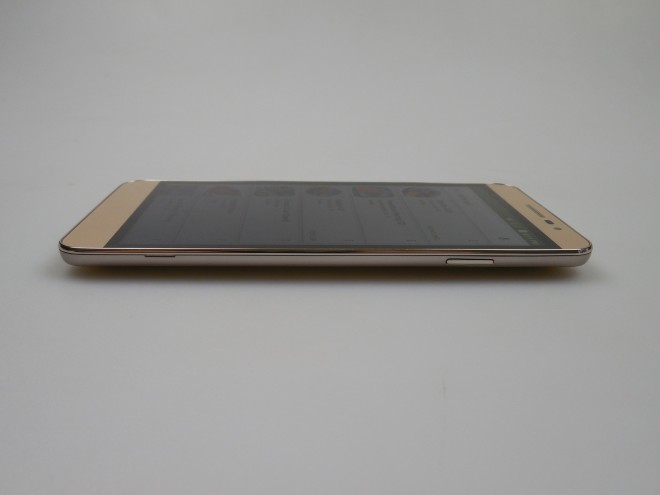 Coolpad Modena has sloped edges and looks more expensive than it is in real life. The design isn’t bad at all. On the hardware side of things, we get a 5.5 inch IPS LCD screen with a 960 x 540 pixel resolution, plus a quad core Snapdragon 410 processor, clocked at 1.2 GHz (64 bit). There’s 1 GB of RAM in the mix, 8 GB of storage, a microSD card slot with support for up to 32 GB extra storage, a main 8 megapixel camera and front 2 MP shooter.

Connectivity on the Modena goes like this: LTE Category 4 with 150 Mbps download speed, HSPA+, dual SIM dual standby, Bluetooth 4.0, WiFi 802.11 g/n, AGPS, Glonass, microUSB 2.0 and FM Radio. Sensors include proximity sensor, accelerometer and ambient light sensor. The Coolpad handset comes with a 2500 mAh battery and on paper it should provide you with 10 hours of 2 GB talk time or 330 hours of 2G standby time. 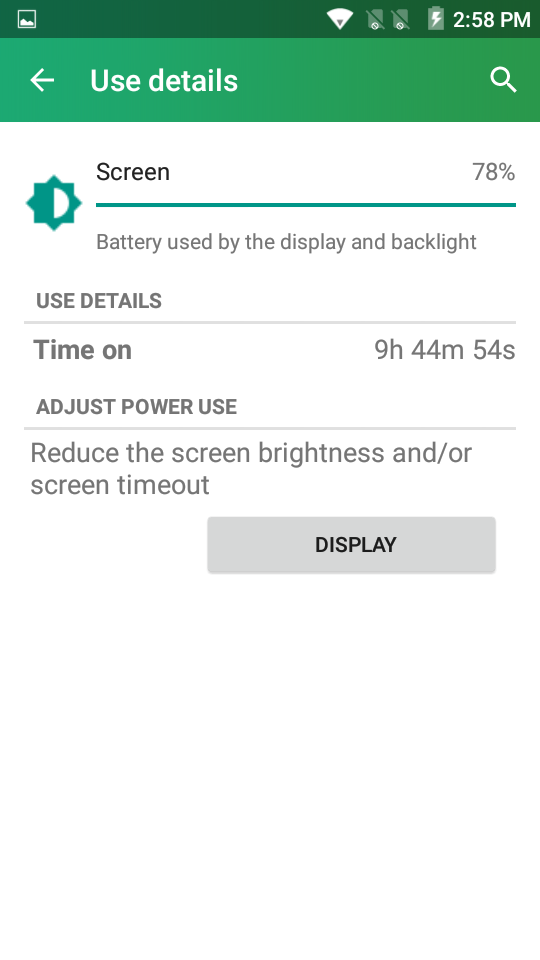 We also did a PCMark test, that simulates continuous usage and reached 5 hours and 52 minutes, which is pretty much OK. This means the Coolpad Modena does better than the Sony Xperia M5 (5 hours and 48 minutes), HTC Desire 820 (5 hours and 25 minutes) and Huawei P8 (5 hours and 31 minutes).

We scored below the Mstar S700 (2 hours and 45 minutes), LG AKA (2 hours and 8 minutes) and Lumia 930 (2 hours and 15 minutes). Battery Saver functionality is here to limit vibration, CPU usage and background data, in order to save some juice. Now let’s talk about acoustics. Coolpad Modena has a small back speaker and relies on the Google Play Music app for playback. 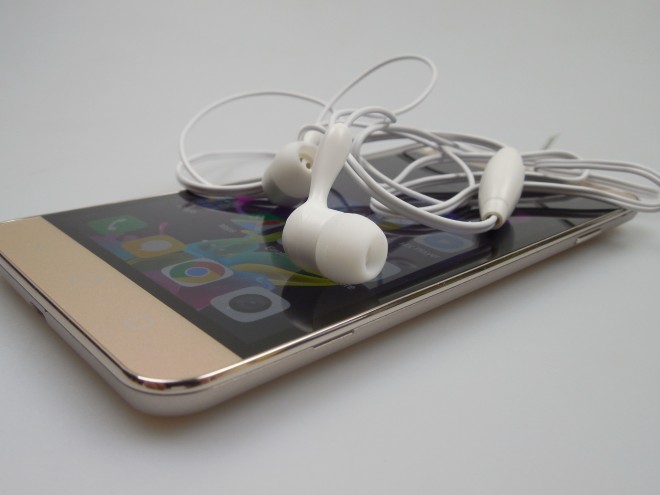 The equalizer is of the Snapdragon Audio+ variety, with genre presets and 5 custom channels, as well as Bass Boost and Surround Sound. Other options are small/medium/large room. The sound during the listening is clear, has good high notes and an OK bass. The guitar is well heard, volume is good, but the muffling is major on a flat surface.

Headphones come with an easily tangled wire, ugly looking remote and a plastic body, plus a rubber tip. They’re comfy, offer loud sound and good isolation, as well as good bass and a clear sound. FM Radio is available too, with a nice UI and features like speaker and the stations are quite hard to find. We did a decibelmeter test and achieved 74.8 dBA upfront and 84.9 dBA at the back, quite the difference. 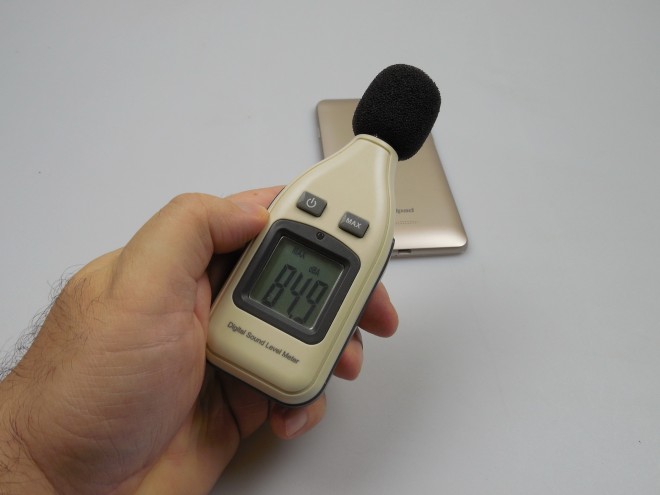 Now it’s time to discuss the display. Modena has an IPS LCD with a 5.5 inch diagonal and a 960 x 540 pixel resolution. The video player used here is Google Photos and viewing experience brought us good colors, wide view angles and a brightness that seemed OK at first sight. The contrast was rather mediocre. Pixels are of the RGB Stripe variety here and the brightness level achieved is a mere 204 LUX, one of the lowest we’ve ever measured on any phone. 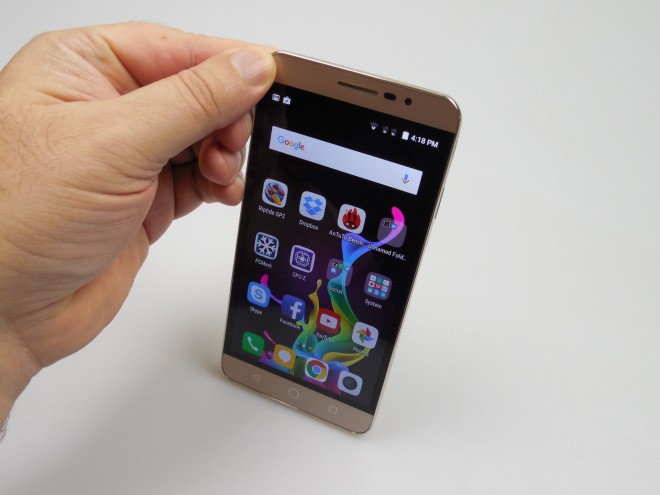 There’s no other model below it, while above are quite a few: Xperia E4 (217 LUX), LG G Flex (246 LUX), ASUS ZenFone 2 Laser (274 LUX). In real life, the screen does look a tad brighter than that though. Settings for the screen include Adaptive Brightness and font size. As far as the camera goes, we’ve got an 8 megapixel main shooter, with F/2.2 aperture, 28 mm lens and autofocus, as well as 1 second startup time.

There’s a front 2 MP camera, with BSI sensor, 720p video capture and F/2.4 aperture. The camera app is not fast, it freezes sometimes and includes a front camera shortcut, flash options and at the top of the UI we find HDR, filters and then Settings. Those include Timer, Brightness, Location, Auto Scene Detect and touch to take pictures. 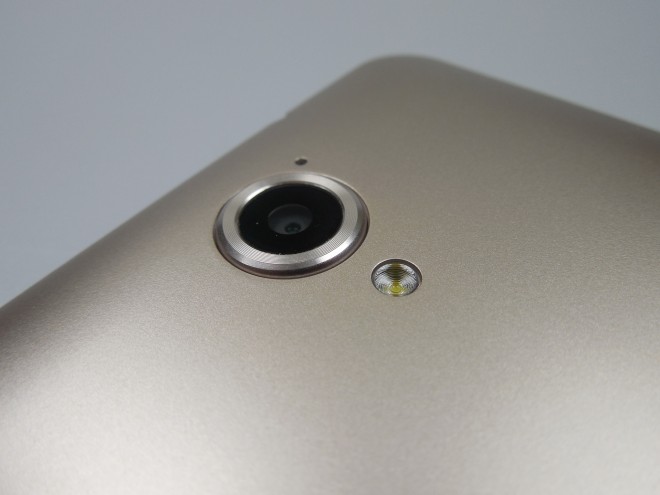 Advanced Settings are Storage, Shutter Sound, Picture Resolution (8 MP in 4:3 and 2 MP in 16:9), while capture Modes include HDR, Beauty, Normal, Capture Smiles and Night Shot. There’s even a Pro option, with functions like white balance, exposure, ISO up to 800, focus (macro to infinity) and finally video (Full HD or HD).

The actual camera use experience involved an OK focus speed, 6X zoom (pretty fluid), a not very clear UI and 2 frames applied when keeping the screen pressed: metering and exposure. Picture taking is fast and there aren’t many options to play with overall. The gallery of shots taken with this model was done in December, on a pretty sunny day. 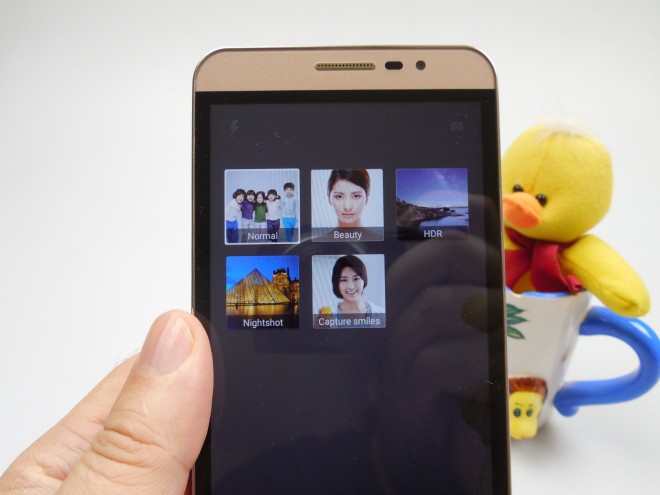 Strangely, there’s no panorama option available. We started with some indoor shots that were a bit grainy and then got outside (gallery here), where colours looked realistic, but the landscape shots were rather blurry, especially after the first zoom in. Selfies weren’t exactly ultra-clear, but the face texture was reasonable. HDR is of not much help, since it doesn’t quite change the look of pictures.

2 megapixel shots look poorly, so you should stick with 8 MP at all time. Some of the pictures we took had a bit of “fog” or a white layer applied, which we didn’t like one bit. If you zoom in quality drops significantly and the colorful toys we photographed in full sun did look a bit better. Focus was reasonable, as well as exposure and white balance, minus the background clarity. 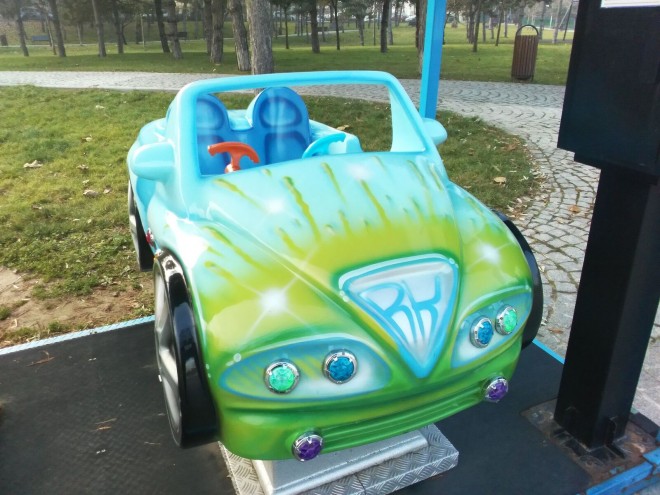 HDR may tend to be blue-ish at times. It’s very hard to take closeups, possibly on account of a less than stellar focus. I’d have to say that on the picture taking side, this model is below the standards of a Mstar S700 and Leagoo Lead 1 for example. It’s also clearly below the impressive Karbonn Sparkle V, that has a 5 megapixel camera blowing this 8 MP shooter out of the water. 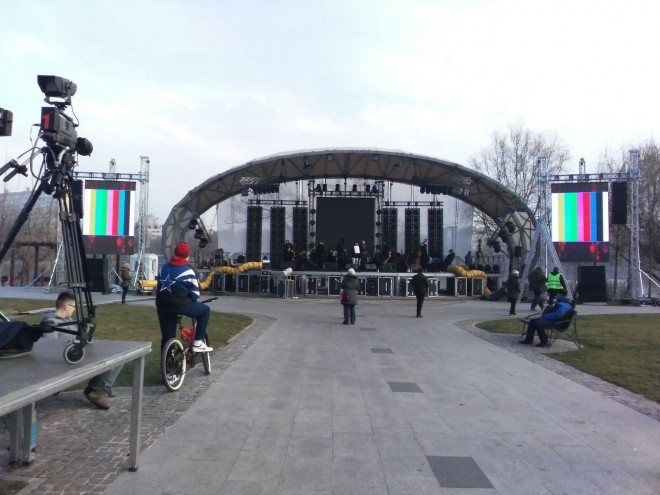 While photo taking is mediocre, video was shot in MP4, Full HD, at 30 FPS and 20 Mbps bitrate, plus it wasn’t bad. The first video registered an OK exposure change, offered reasonable quality and poor stabilization. Colors were good and then came the second video: shaky, a bit overexposed and looking like HD or even SD material at times.

Finally, the third video has OK colors, OK quality and when you zoom in details drop significantly. Overall, this camera is below 80% of the 8 megapixel cameras on smartphones I’ve tested and even gets beaten by some 5 MP units. The lack of Panorama or the forced 2 MP resolution for 16:9 shots are big problems. Images are simply too white at times and overall, we feel that even for a phone below $200, things could have been better in the optics segment.

Editing is done with options like Auto, Light, Color, Pop, Vignette and Filters. We tested the temperature of the phone, reaching 38.3 degrees Celsius, after 15 minutes of playing the game Riptide GP2, so there’s no overheating here. The web browser we relied on was Chrome, which was kind of slow on this device, while the preinstalled virtual keyboard is SwiftKey, that’s OK spaced and has a comfy Swype functionality and many options. 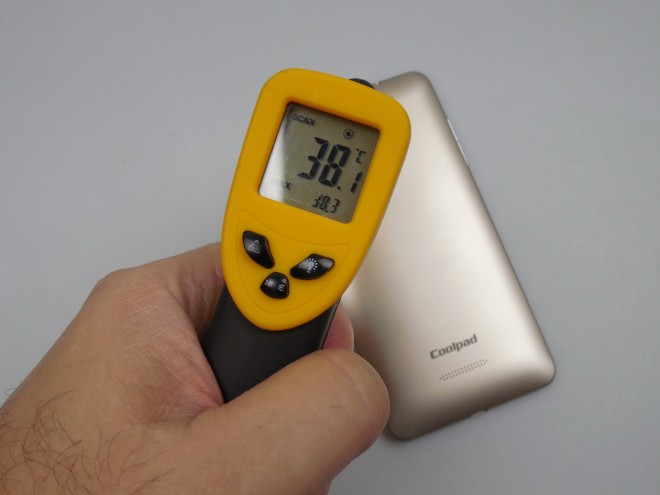 As far as connectivity is concerned, Coolpad Modena has dual SIM slots, LTE Category 4 support and sadly no trace of WiFi a/ac/b, or NFC. Meanwhile calls are pretty clear and there’s also Speed dial functionality. Signal is OK, but WiFi is at 50% signal most times. Now let’s talk about the benchmarks, after having decided to compare the Modena with the LG AKA, Leagoo Lead 1 and Xperia E4G. 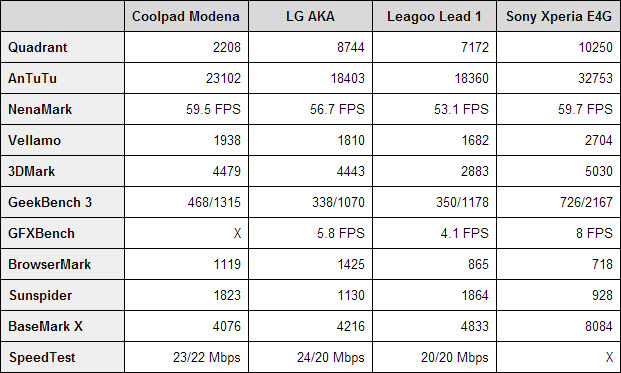 Modena is not much of a fighter, scoring first in only 1 out of 11 benchmarks. Compared to the LG AKA’s old CPU it only wins 6 out of 11 battles, certainly not a compliment. The results aren’t good, but there’s also no lag, so that’s nice. The UI is fluid, minus the random camera freezes and games such as Riptide GP2 run like a charm.

The smartphone runs Android 5.1.1 Lollipop, with some customization and keeps the carousel multitasking, among others. When you keep the screen pressed, you will trigger the usual widgets, wallpapers, effects and preferences area. The dropdown bit includes notifications and Quick Settings (non stock, with icons and colors that feel somehow inverted) 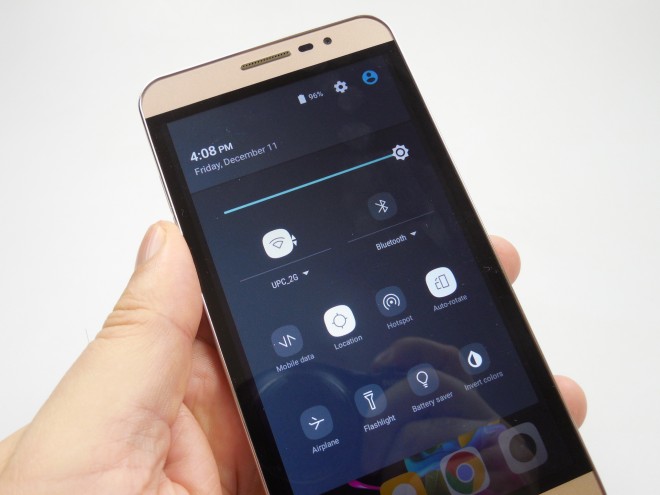 Settings offer access to security options and something called Smart Control. This feature lets you double tap to wake the device, draw symbols to activate apps and more. You can also change the features of the capacitive buttons. Now as far as the apps go, there’s no app drawer here, so all the apps are on the homescreens.

The app list goes like this and I have to say there’s quite a few of them for 8 GB of storage:

Normally this wouldn’t be enough to be called bloatware, but in such storage conditions it kind of is. And now I guess it’s time for the verdict. 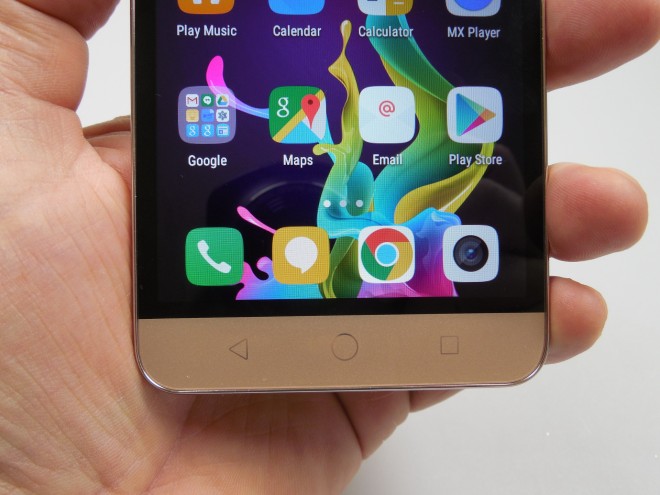 We start with the Pros:

This is the type of phone that looks and acts more expensive than it actually is, but when you use for it for a bit, you start to feel some of the compromises. The display and camera are letdowns for sure, but at least there’s no lag, games and apps run OK and the battery is actually good. If you’re willing to trade off some of those elements for a price below $200, this is a reasonable purchase.