If you’re looking for a 3D game to have fun with on Android and have a pair of anaglyphic glasses laying around, then I recommend you play Crash Course Ice. This title has you controlling a ship that shoots its way across a blue planet, with beautiful light effects and fast paced music. 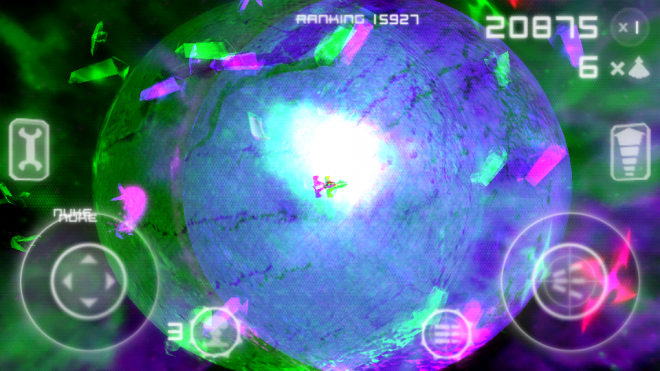 You get a bunch of weapons to shoot with, stuff like a minigun, plasma a multidirectional gun and more, plus the option to blow everything up on the screen with a nuke. You’ll race around a planet in 3D and spin around it as crystals and alien ships attack you. If you’re in a pickle and you’re surrounded you can bolt out of danger by pressing a special button on the right side of the screen, that will make you rush out of peril and destroy enemies in your path.

Also, once you die, the enemies nearby will die as well. There’s a casual mode to play in, an arcade mode and survival mode. You can choose between 2D/3D graphics, increase the quality of graphics and switch the camera distance. There’s an on screen virtual analogic stick on the left, used to control your direction and a stick on the right to control the direction you shoot in. Beautiful game and highly addictive! You can download it from here