Xperia Pureness is now a distant memory of a transparent phone, as now we have more evolved models, like the one shown in action below. This futuristic phone has a double sided display, as we informed you here. 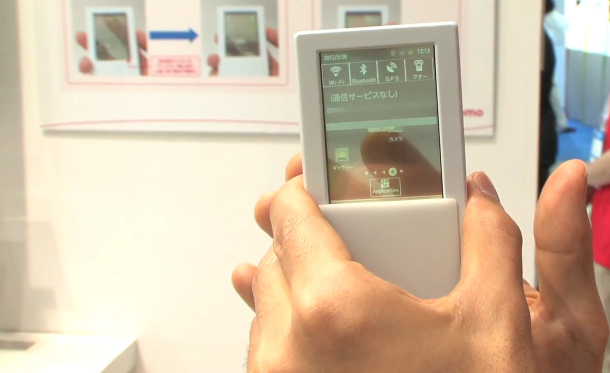 The transparent touchscreen is a color one and input is supported on both its sides. Japanese carrier NTT DoCoMo and Fujitsu showed off this device, in prototype phase. It was showcased at the 2012 Wireless Japan expo and relied on a dual sided 2.4 inch OLED display, with a resolution of 320 x 240 pixels. This handset seems to run an unspecified version of Android and it allows moving icons around the screen using both the screen’s sides.

You can also see a Rubik’s Cube having its faces rotated using the sides of the touchscreen. The problem here is using the prototype in bright light, since the screen won’t be able to display content as well as it does when it’s darker around it. The employee demoing the phone said that this would make a nice secondary display, an idea that I second and I’m looking forward to seeing a commercial release.