Yesterday was all about the New iPad and its features, but Apple also announced something else: 1080p content in iTunes and… iOS 5.1, available for download right now. The software package is 189MB in size and it was only mentioned by Tim Cook as a way to implement Siri in Japanese on compatible devices. 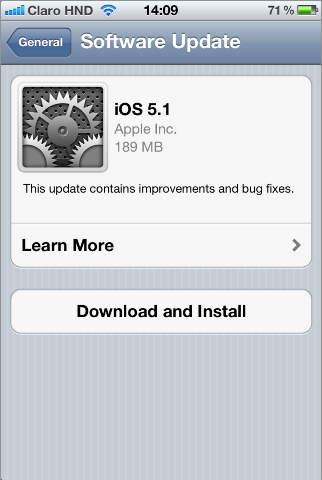 We also get quite a bunch of new stuff, like battery performance fixes for the iPhone 4S, that everyone was expecting. Also, there’s the possibility to delete photos from the Photo Stream, especially hidden ones. iOS 5.1 also changes the camera shortcut, so that it’s always available on the Lock Screen and doesn’t need two hits of the Home button to trigger it. Genius Mixes now works with iTunes Match and another important change is the updated AT&T network indicator.

Know that camera face detection highlights all detected faces now, there’s a redesigned camera app for the iPad, audio for TV shows has been optimized to be louder and cleared on the iPad and a bug that made audio drop during calls was fixed. Happy with your update?