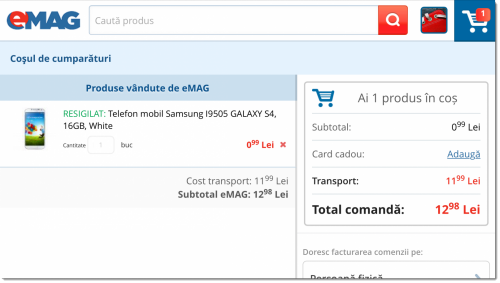 After Black Friday ended at Romanian retailer eMAG.ro, there was a bit of a mess up on the company’s e-store on Sunday evening, as a bunch of products got listed with wrong prices. This was sort of an unintended Black Friday itself, since the public caught wind of it and started buying, as Mobilissimo.ro informs us.

The error was in place between 8.30 PM and 10.59 PM and it even included a resealed Samsung Galaxy S4 priced as low as $3.7. Today news came that the e-tailer has decided to deliver all the products to the people who bought them, as sort of a gift and admission of their mistake. It may be a promotional fumble in the end, since it increases the public’s trust in eMAG.ro, the biggest e-tailer in Eastern Europe.

This company is part of the South African group Naspers and has done something similar in the past. They also had the Dell Studio XPS Duo 12 laptop priced at just $1, when it usually cost more than 1000 euros. Another good price reduction was the one of a 3D Philips Smart TV with 117 cm diagonal, that also cost a mere dollar, down from almost 1000 euros. The overall orders in that above mentioned time frame was 730 and reductions totaled around $324.000, which is quite impressive.

That’s the way to do business, folks!