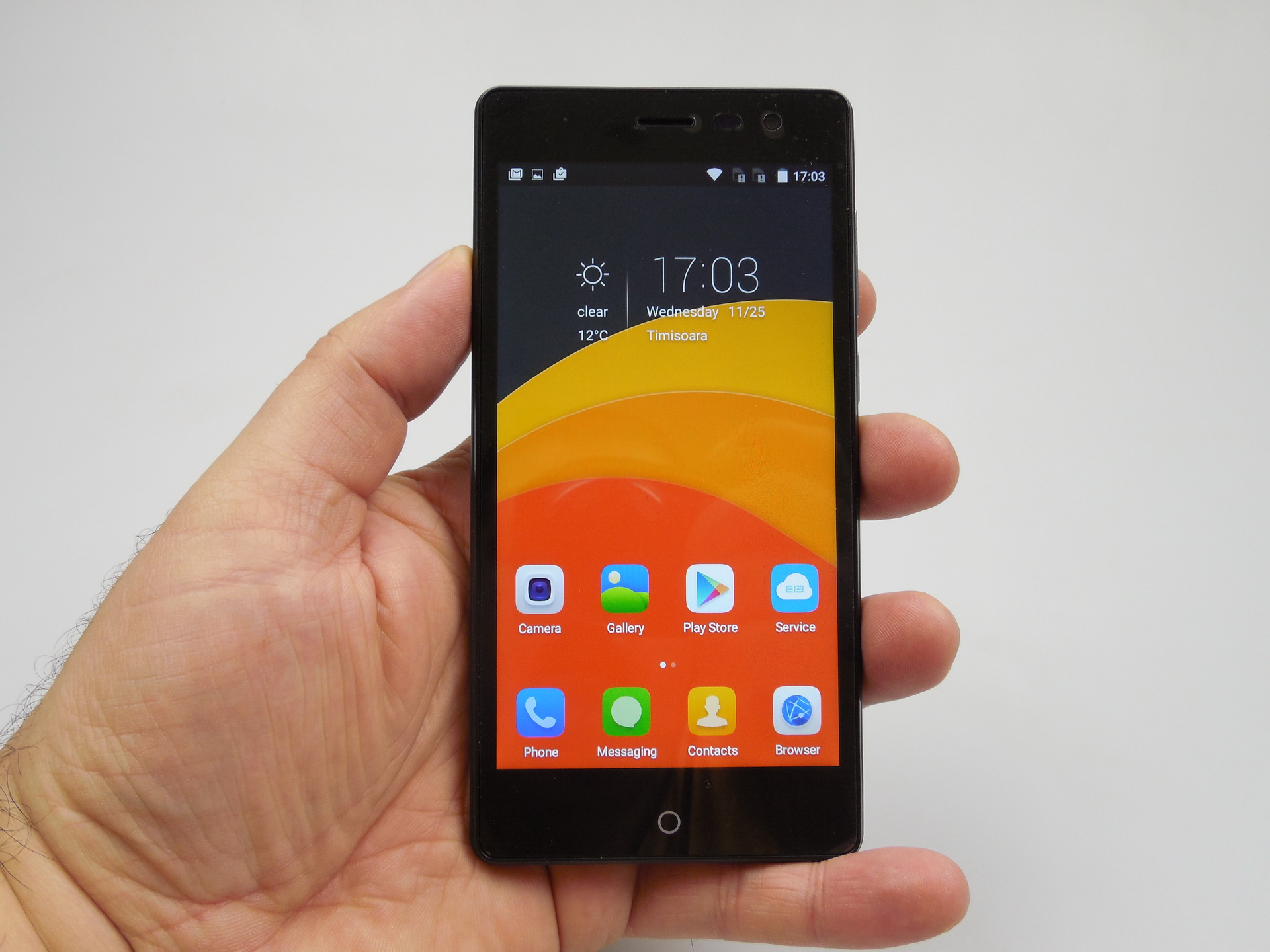 Elephone had a stunning year and when I say that I’m referring that after being virtually unknown in 2014, this year they’ve been in the news all the time with fresh launches every week or so. One of their handsets reached us and it’s called the Elephone Trunk. It gets reviewed in the following lines. 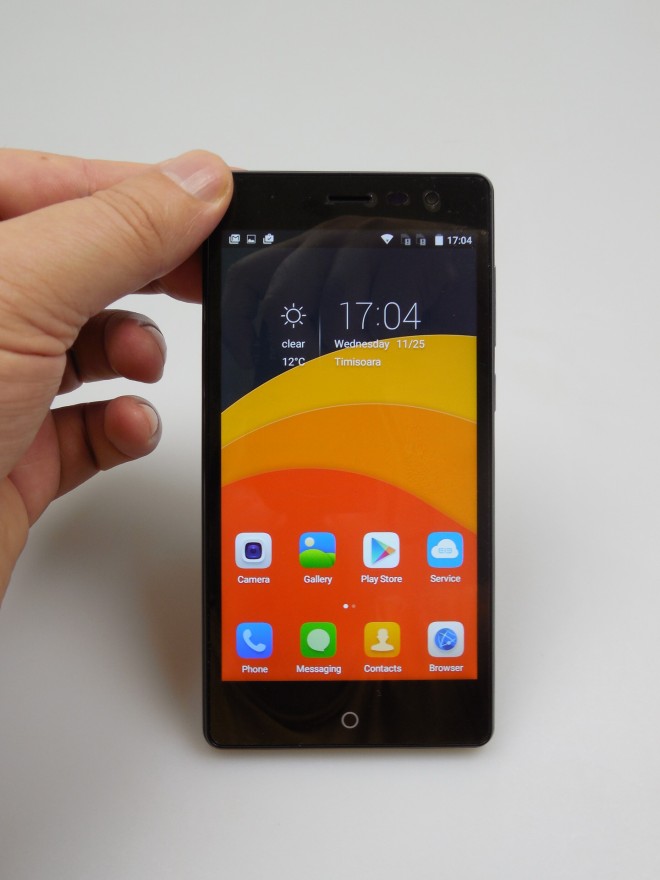 So, just in case you want some extra background, you should know that Elephone is a Chinese company that was established in 2006, but became popular over the past 2 years. Trunk was launched a few months ago and it’s priced at 159 euros in an Elephone-certified store in France. We’re dealing here with a 5 inch midrange handset and the very first Elephone model we test.

It measures 8.9 mm in thickness, weighs 138 grams and this means that it’s heavier and thicker than the Xiaomi Mi 4i, which measures 7.8 mm in thickness and weighs 130 grams. Still, it’s much more compact than the HTC One M9 for example. The design and feel remind me of the older Nokias, especially the texture of the back side. Said texture feels very much like the one of the ASUS ZenFone 2 Laser. 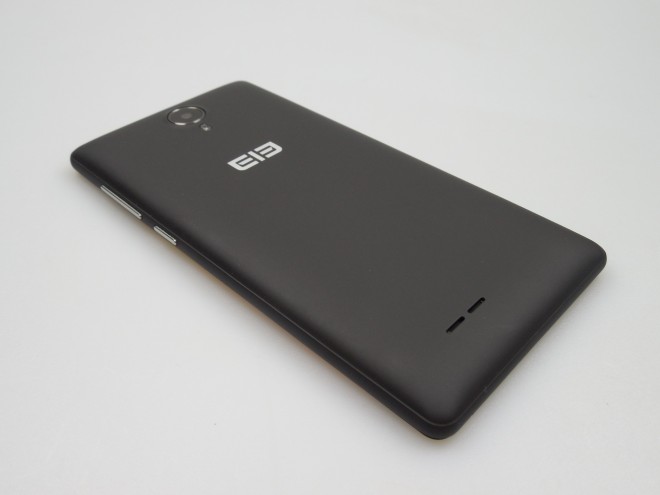 Trunk comes in black, white, pink, cyan or blue and it’s comfy to hold, plus it’s pretty solid. It has a long body for a 5 incher and one hand usage is a bit cramped by that. I should mention that this model is 2 mm longer than the Xiaomi Mi 4i. We also get good grip, rounded edges and upfront we find the earpiece, selfie camera, sensors and bezels with reasonable thickness.

Also upfront there’s the Home button and 2 capacitive buttons that are very low profile. At the back there’s the usual back camera and flash, plus the speaker and the back cover is easy to remove. Below it there are two SIM slots, a microSD card slot and a removable battery. The same cover is a bit hard to put back, especially in the volume button area. 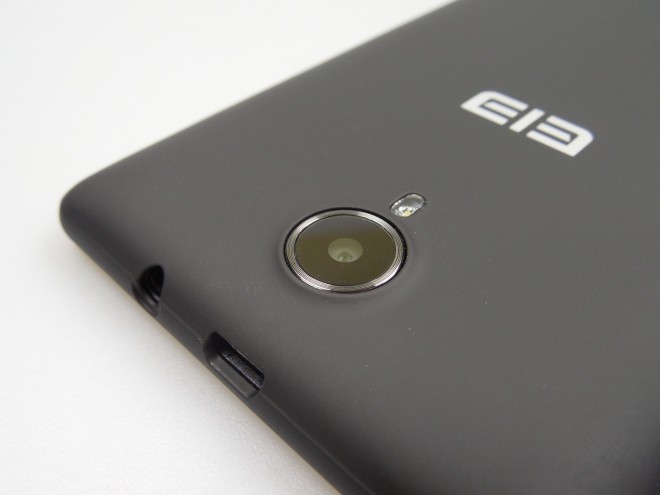 At the top of the phone you will notice the audio jack and microUSB port, while at the bottom rests the microphone. Nothing on the left side, while on the right side we can press volume buttons and the Power button, with pretty good feedback. The device isn’t bad looking, especially for a midranger. Now we move on to hardware, where we find a 5 inch IPS LCD screen with a 1280 x 720 pixel resolution, as well as a quad core Qualcomm Snapdragon 410 processor, clocked at 1.2 GHz and using 64 bit Cortex A53 cores based on the 28 nm production process. 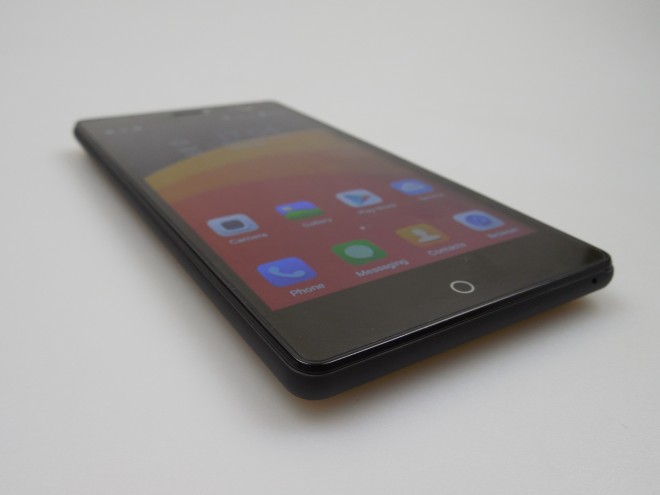 Sensors include the proximity one, light sensor and gravity sensor, so overall the hardware is OK, with my only regret being the lack of a 13 megapixel camera, NFC and WiFi a/ac. The battery on the Elephone Trunk is a 2100 mAh unit, that on paper provides 360 to 400 minutes of talk time and it should provide 170 to 200 hours of standby functioning.

During our test, that involves HD video playback in a loop, with WiFi on and brightness at 200 LUX, we achieved 5 hours and 35 minutes of playback, so not exactly impressive. At least we surpassed the LG G3, with its 5 hours and 6 minutes, Huawei P8 Lite (5 hours and 25 minutes) and LG G Flex 2 (4 hours and 7 minutes). 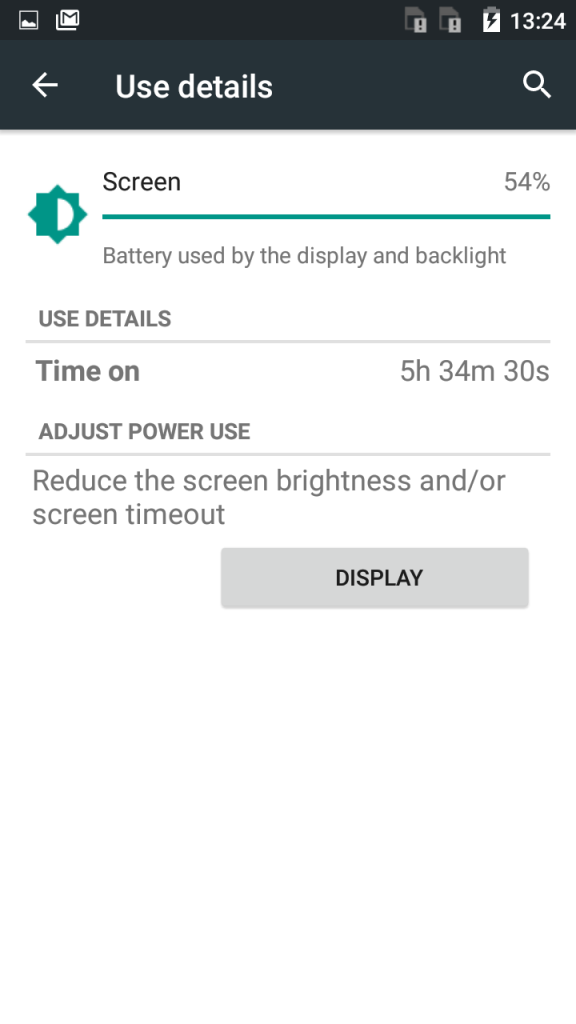 Of course, there are plenty of phones that charge faster, like the OnePlus 2 (2 hours and 13 minutes), LG G3 (2 hours) and OnePlus One (1 hour and 15 minutes). Settings include a Battery Saver feature, that reduces performance and limits vibration, so I’d say that overall the battery is mid-level, not very impressive. 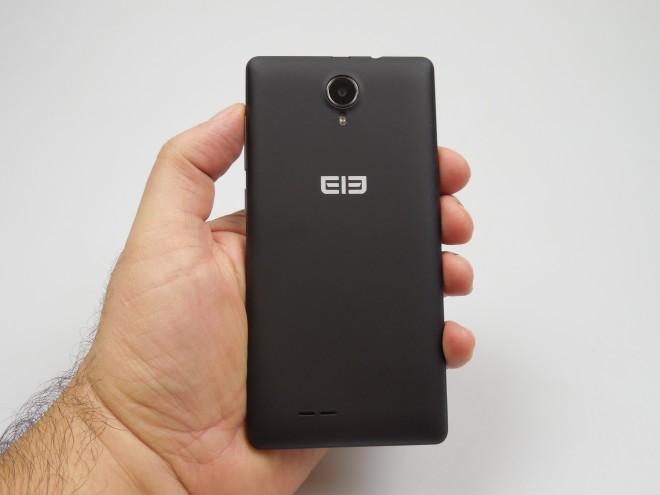 The acoustics involve a singular back speaker and Play Music as the player of choice. There’s a strange new equalizer in the app called Snapdragon Audio+, that I’m not familiar with. It offers settings and options related to genres, 5 frequencies with sliders to tweak and an old school UI. There’s Bass Boost and Surround Sound included, too.

Extra options are: Small Room, Medium Room, Large Room and Plate for example. The acoustic experience involves a pretty loud volume, a so-so bass and a clean sound, but there’s a big case of muffling on a flat surface. All notes are heard OK and voice is also OK. There are no headphones bundled with this model, in case you were wondering. 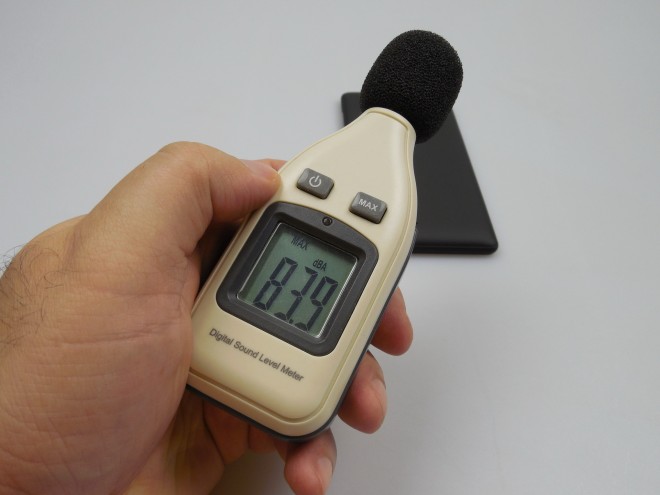 We did a decibelmeter test and found a very underwhelming result of 67.9 dBA at the front and 83.9 dBA at the back, which is 0.1 dBA better than the iPhone 6 Plus. The front side result means that the back is resting on a flat surface and muffles the sound. Well, the result previously mentioned means that we surpass the LG G Flex 2 (82.9 dBA), Huawei P8 Lite (82.9 dBA) and iPhone 6S even (81.7 dBA).

We scored below the Leagoo Lead 1 (84.2 dBA), ASUS ZenFone 2 Laser (85 dBA) and Xperia E4G (86.5 dBA). There’s FM radio here and overall the acoustics are OK and we move on to the display. Said screen is a 5 inch IPS LCD with HD resolution and OGS technology. The gallery is the video player and the visual experience involves crisp image, realistic colors, good brightness, OK contrast and wide view angles. 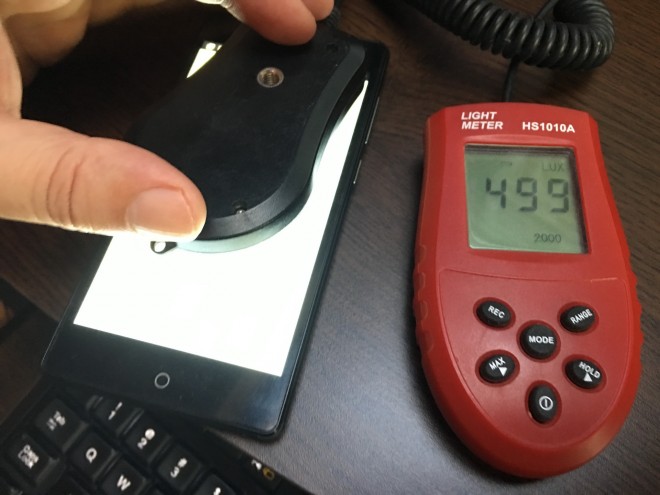 The screen is a pleasant surprise and offers a vivid image. Its Gallery app also has audio effects options and a stereo function. Pixels are of the RGB Stripe kind and the brightness reaches 499 LUX, as we measured with our luxmeter. This means we surpass the OnePlus 2 (465 LUX), HTC One M8 (463 LUX) and Galaxy S5 (480 LUX).

We did score below the iPhone 6 (570 LUX), Evolio Onyx (564 LUX) and iPhone 6S (618 LUX), so the screen is truly bright. In the Settings area we can find options for the screen like Adaptive Brightness, font size and blur effect. The screen has got to be the best part about the Elephone Trunk so far. The main camera is an 8 megapixel unit with a Samsung sensor and the ability to do interpolation and trigger 13 megapixel shots. 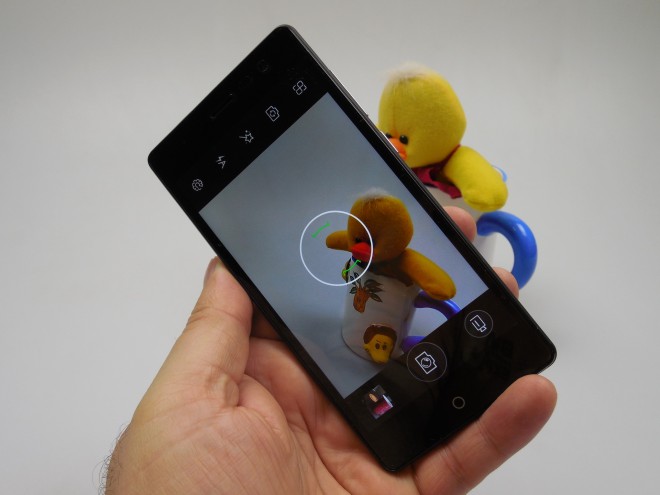 There’s also an LED flash in the mix and upfront we’ve got a 2 megapixel camera. The Camera app opens up fast and has a cartoonish UI, plus it’s filled with options. For example we have access to a ton of modes, like Sunset, Landscape, Snow, Candle Light, Night, Portrait, Beach, Sports, AR, Action, ASD, Theatre, Fireworks, Flowers, Auto, Party, Night Portrait, Steady, Photo and Backlight. 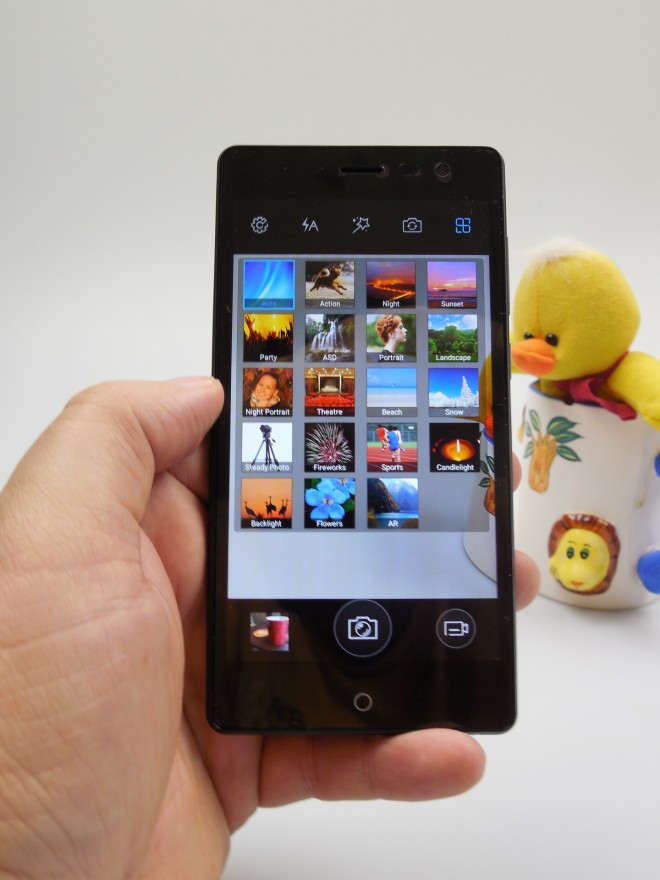 Finally, the camera allows you to mess with white balance, anti banding and red eye reduction, tweak the ISO up to 3200, activate HDR and preview the image in  4:3 or 16:9. Videos get stabilization options, audio encoding in either AAC or AMRNB, duration (30 minutes, 10 minutes or 30 seconds), time lapse, white balance, resolution (Full HD or HD), video encoder (H.264, H.263 and MPEG4), plus location functionality. 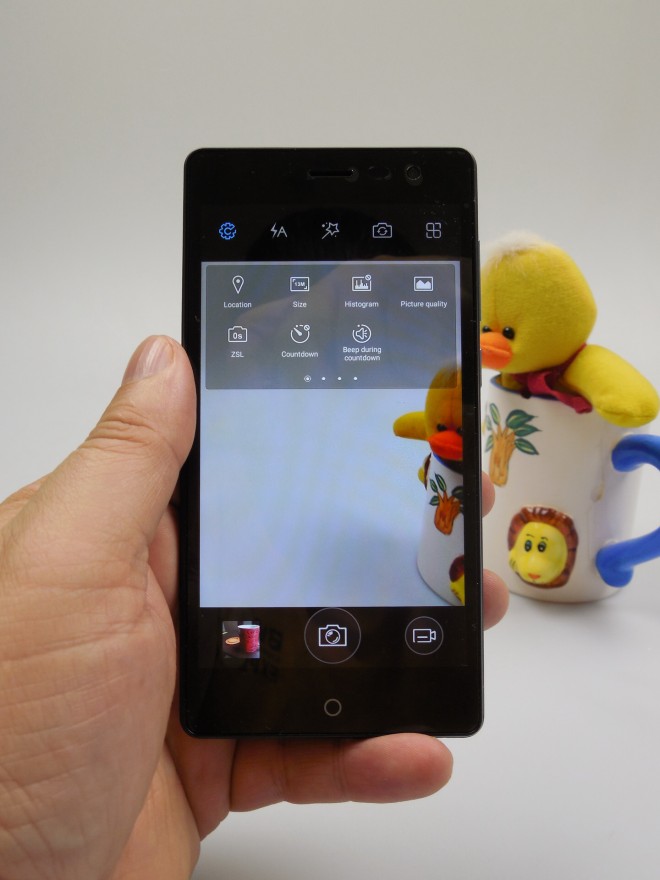 The actual camera experience was strange, in that there was no touch focus, or at least I didn’t find it. It felt a bit random to focus on things, but the autofocus was OK. Focus is not very fast and we’ve got up to 6x zoom, which is also not fast and drops a bit of quality when the zoom starts.

Picture taking is slow too. The gallery of shots taken with this phone was created in early December, on a cloudy day. We also had some indoor shots, with OK quality and color, but also slightly overexposed. The outdoor shots were clear, had OK colors and some blur, probably from the focus thing we mentioned. Landscape shots were decent and there wasn’t a huge detail loss. 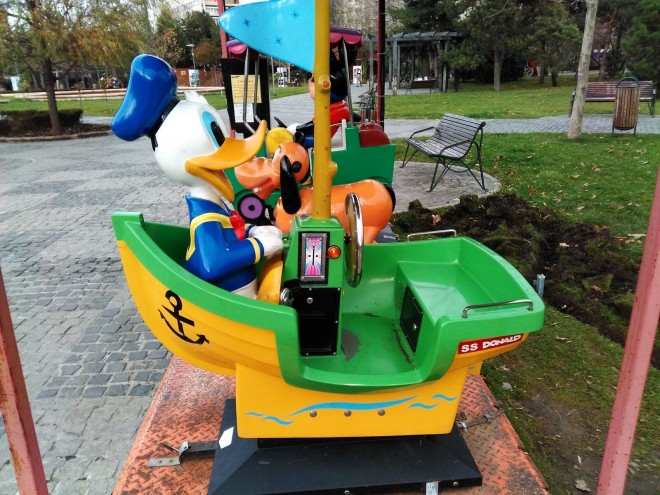 The selfie was a tad overexposed and the HDR felt too artificial to be good. Overall, I’d say the colors were realistic in the shots and the balance and exposure were OK. Some moved shots happened here and there and the closeups were reasonably good, albeit that black knot on the playground was too white in closeup.

Lighting and texture were actually quite good when we got to photographing plants in the park. Then came the glossy and colorful toys, also handled well by the camera, both with interpolation and without. It was very hard to get proper focus for closeups, while lacking touch focus. Since I’m the owner of an iPhone 5, I’m tempted to compare this camera to the one of my phone and have to admit that the iPhone 5 is better. 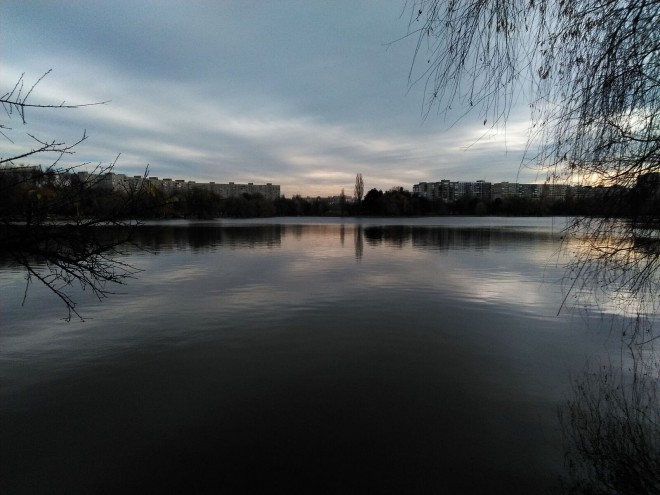 I’d place the Elephone Trunk in the same league as the Leagoo Lead 1 and Mstar S700. Video capture is done in MP4 format, Full HD, at a good 19 Mbps bitrate, but with an underwhelming 14 FPS frame rate. The first video we did had a penchant for constantly refocusing and it was choppy, because of the low frame rate.

Stabilization was also rather poor. Same goes for the second video, that also brought up acoustics problems, like the echo. The third video once again had an echo and the image was dark, plus it didn’t even feel like HD, sadly. Overall, I’d call the video capture poor even for the price, but the photo one is passable, if you can deal with the focus stuff.

Editing pictures is done with filters frames, cropping options and those related to human faces (bigger eyes and such). We also tested the temperature of the device and got to 41 degrees Celsius, after 15 minutes of playing Riptide GP2, so there’s a bit of heat here, but no overheating. The web browser on board of the phone is kind of slow, but at least the virtual keyboard is the stock Lollipop one and comfy. 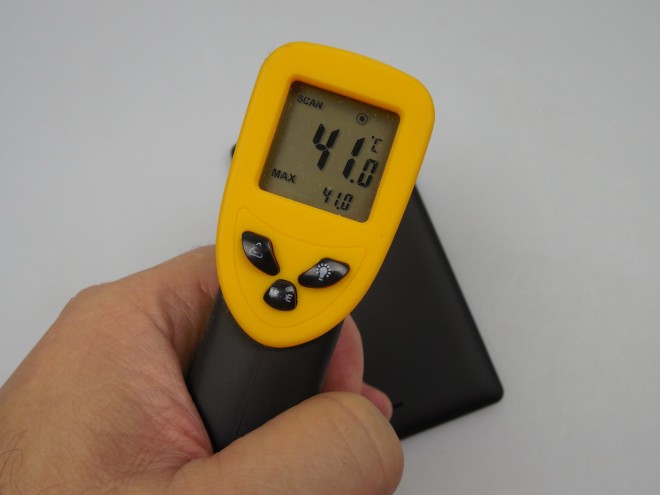 When dealing with connectivity, I have to say that we were happy with the cellular signal, call quality and volume, while the GPS found us pretty fast. There’s LTE in the mix, dual SIM slots, but we lack NFC and WiFi a/ac. A speed dial feature is also present. Then come the benchmarks, where we decided to compare the Elephone Trunk with the Huawei Honor 4X and Samsung Galaxy A5.

All 3 phones have 2 GB of RAM, so this is a battle between two phones with Snapdragon 410 CPUs and one with a Kirin 620. Here are the results:

Overall, the Elephone Trunk wins 2 out of 11 battles and beats the Galaxy A5 in 7 out of 9 tests. It doesn’t suffer from lag, it offers a fluid experience and runs games pretty much OK, including the benchmark game Riptide GP2. As far as the OS goes, it’s Android 5.1.1 in pure stock form, although this is very strange, because when we unboxed the handset it came with a custom UI that was very interesting. 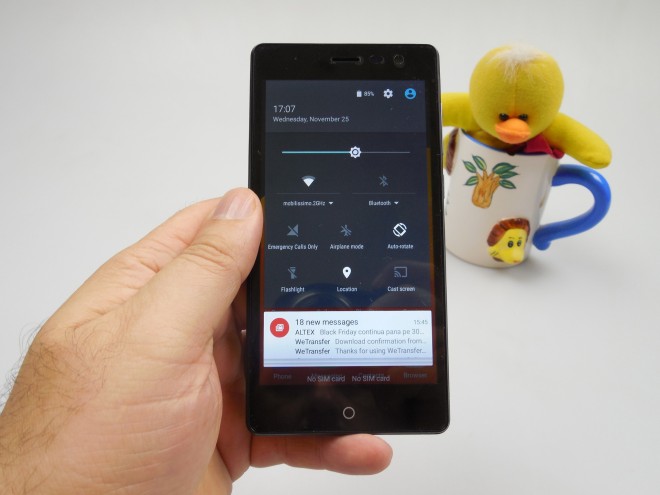 Two software updates later it’s back to the stock Lollipop, including stock widgets, dropdown area and Settings. Multitasking is also typical for a Lollipop phone and aside from customizing the functionality of capacitive buttons, there’s not much of interest to find in the Settings area.

And now I guess it’s time for the verdict. 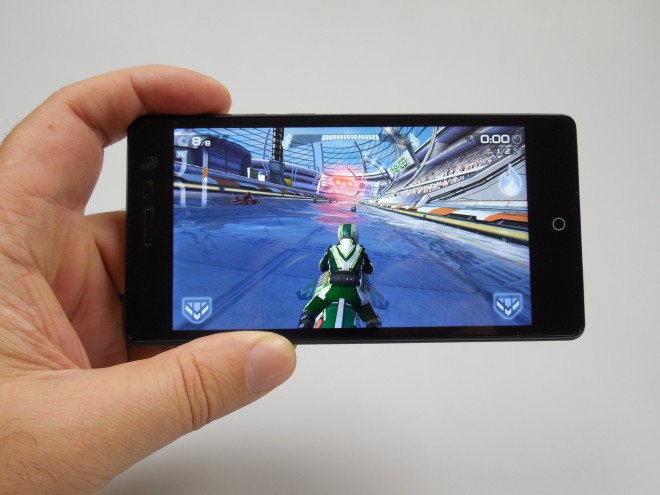 Overall, this is a midrange comfy smartphone, with a very bright screen and a reasonable camera, minus the filming and focusing, while the acoustics are good enough. Sacrifices feel unintentional here and they aren’t compromises made for the sake of the price. It’s true that a 13 MP camera would have made a world of difference, but in the end we get what Elephone wanted to deliver here, which is a device meant for media consumption, the young user and those who want to spend less than $200 on a smartphone.

They succeeded in doing that, but the word “OK” and “just fine” suit this phone better than excellency.