Flash 10.1 has just been announced yesterday, during Adobe’s MAX conference in Los Angeles and it seems that the new version will be providing tons of interesting features, some of them powered by the Open Screen Project. The latter will unify feature sets on many platforms on the desktop, laptop and pocket segments. 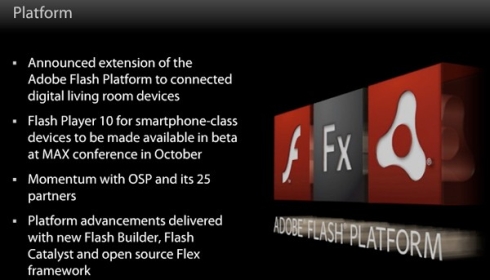 Windows, Mac and Linux users will get the opportunity to mess with the software first, while public betas of the new Flash will reach Windows Mobile and webOS before the year end. Android and Symbian OS will get their as 2010 starts, while RIM and Adobe have just announced a partnership that should prove fruitful to both companies.

We’ll probably see Flash 10.1 taking advantage of the Tegra and Snapdragon chipsets on mobile devices, plus GPU acceleration on key mobile platforms. The ION platform is also on the list and we learn that Adobe’s new brainchild will support 720 and 1080p video on the latest smarbooks and netbooks.