Hundreds of Foxconn workers in a factory in North China have left work and started a protest, going on strike and refusing to make… the new iPhone, according to local sources. What’s interesting is that the local news report is also saying that Foxconn received quite an urgent order for the new Apple handset, so it’s looking for 20k more workers in the following weeks. 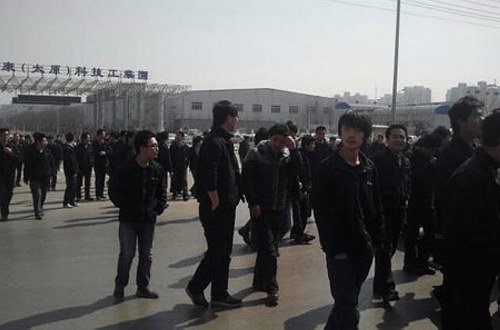 The protesters want a better pay, something that was promised after the Apple inspection and all that coverage in the Western media. The entry level worker at Foxconn gets around $245 per month and after 3 months the pay is elevated to $285, to reach a max of about $345-$550 a month with overtime pay and bonuses included. The factory that’s doing the extra recruiting for those “new orders” is the one of Taiyuan. Foxconn is supposed to take on 85% of the manufacture for Apple and they’ll have to produce around 57 million devices each year.

Taiyuan Foxconn is supposed to become the main base for manufacturing the iPhone 5, apparently. With so much discontent going around, isn’t there a disgruntled employee who will decide to “borrow” an iPhone 5 prototype and let it leak… in bar? I guess that better pay would be a good solution, but in the meantime let’s see how Foxconn handles this crisis… that was coming for a long time.