After reviewing the Samsung Galaxy Nexus and the Nexus S over the past years, it’s now time to check out the Google Nexus 4 handset. The device is priced at $299 in the 8 GB version and it was very hard to find in stock anywhere at some point. This was the very first Android 4.2 device out there and it had some initial stock problems and apparently some design problems, according to various users. Let’s see what we thought about the device. 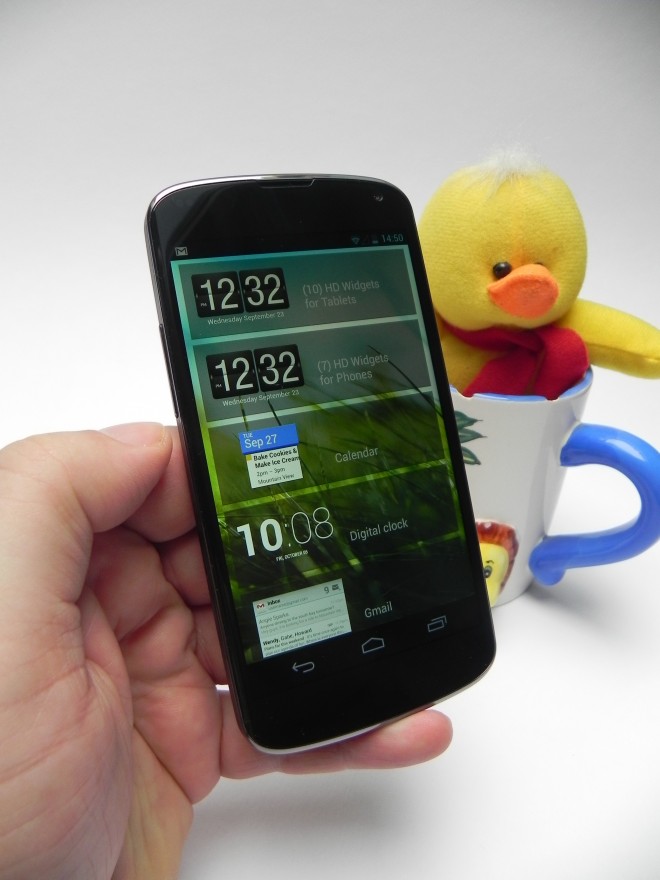 This is the first Nexus handset made by LG and it’s strongly related to the LG Optimus G, with which it shares quite a bunch of specs. It measures 9.1 mm in thickness, weighs 139 grams and it’s bulkier and heavier than I expected. The front side of the handset is all glass, as is the back, creating a premium, elegant look, but also a sense of frailty. The device has Corning Gorilla Glass 2 protection upfront and a chrome frame all around the device.

There’s very little space between the screen per se and the glass, thanks to a revolutionary LG technology, that increases image clarity. The glass back is a fingerprint magnet and it really highlights the overheating of the device, sadly. The cute thing about this design is that front notification light, that gently glows below the display, where a Home button would usually be. There’s no microSD card slot or removable battery on the device, or any trace of 4G LTE, just so you know. 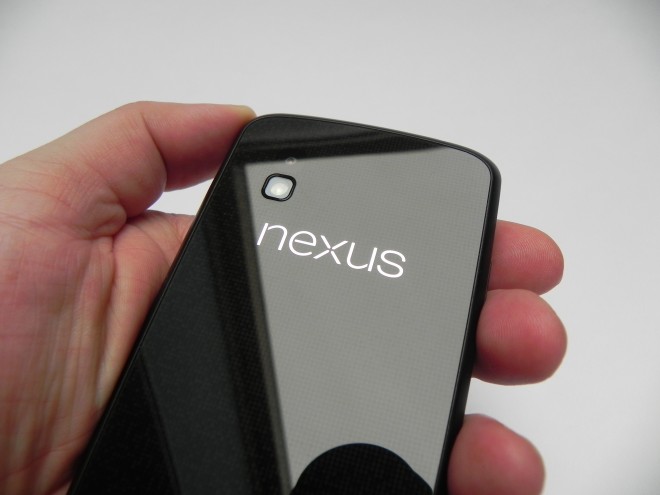 Also, the device comes without headphones in the package and back to the design, it only uses virtual buttons, so no capacitive or physical ones upfront. Moving on to the hardware, we get a True HD IPS Plus display, with a 4.7 inch diagonal and a resolution of 768 x 1280 pixels. The same screen has a 318 pixel per inch density and continuing with specs, the device comes with either 8 or 16 GB of storage, 2 GB of RAM, HSDPA 42 Mbps connectivity and Bluetooth 4.0, as well as dual band WiFi.

There’s also DLNA, NFC and an 8 megapixel camera at the back, with autofocus, LED flash and 1080p 30 FPS video capture. Upfront the LG Nexus 4 has a 1.3 MP camera and inside there lies a quad core Snapdragon S4 Pro 1.5 GHz CPU.  We also get an Adreno 320 GPU, an accelerometer, gyroscope, proximity sensor, compass, barometer, GPS and Glonass. 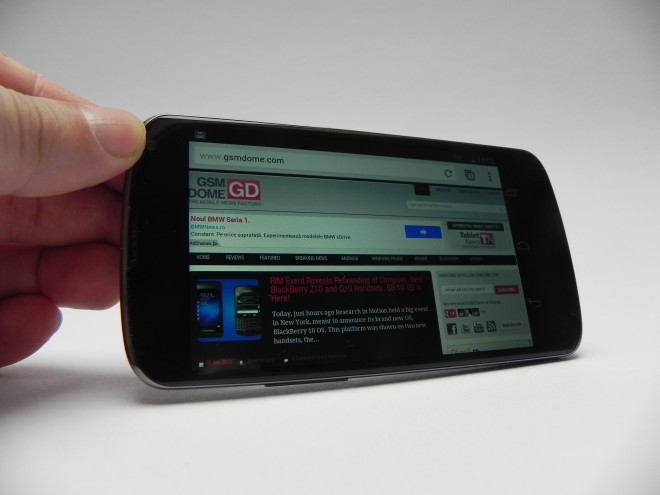 There’s no FM radio here and finally getting to the battery, this one is a Li-Polymer unit with 2100 mAh capacity, that on paper promises 390 hours of standby and 15 hours of talk time. In real life, in our tests we got a good day or day and a half of functioning time, so we’re pretty happy with the battery life. Moving on to the multimedia testing, the audio quality was found to be actually good. The volume is pretty high, clarity is also good, but the bass is a bit underwhelming.

However, if you plug in some headphones, you’ll be more than pleased with the results. Speaking of audio, the call quality is excellent and the noise cancelling works like a charm. As far as the video quality goes, this is the area where we evaluate the screen. The viewing angles are wide, the colors are not that vivid and brightness could have been better. Also, the Nexus 4 doesn’t behave that well in direct sunlight. However, the quality of the blacks and whites is impressive, thanks to the type of screen. 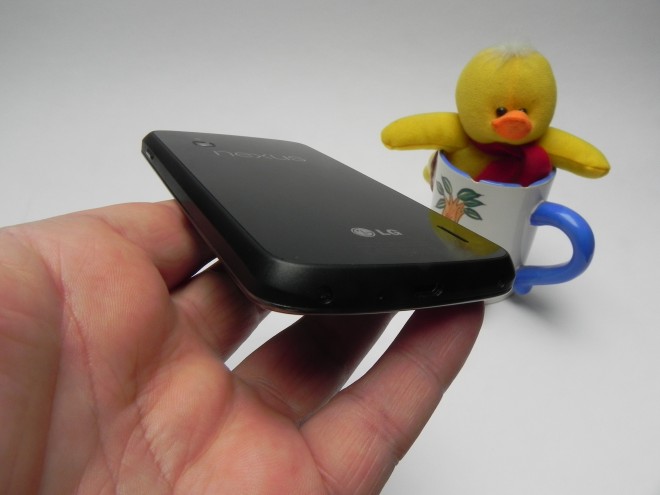 Also, the image shown on the screen appears to be floating, thanks to the very little space between the glass and screen, which is a good thing. The camera is a bit underwhelming and I have to say I have the new Android 4.2 camera UI. It has no effects, it’s not comfy to use and it doesn’t feel right. You have the usual HDR and panorama features, plus a new kind of panorama called Photo Sphere, a 360 degree panorama actually. The problem with the 8 MP camera here is that it takes too much time to focus properly, especially in video capture.

At least the vids are captured in MP4 format with a 9 Mbps bitrate, although I’ve seen much better on some Windows Phone 8 devices. The close ups of the Nexus 4 are inferior to the ones taken with a Galaxy S II and I say that having seem them both working at the same time. Overall, the camera is a big disappointment, just like it was on previous Nexus handsets. And now benchmarks! This is the area that people justify with the fact that benchmarks haven’t been configured for Android 4.2, so that’s why the results are bad. 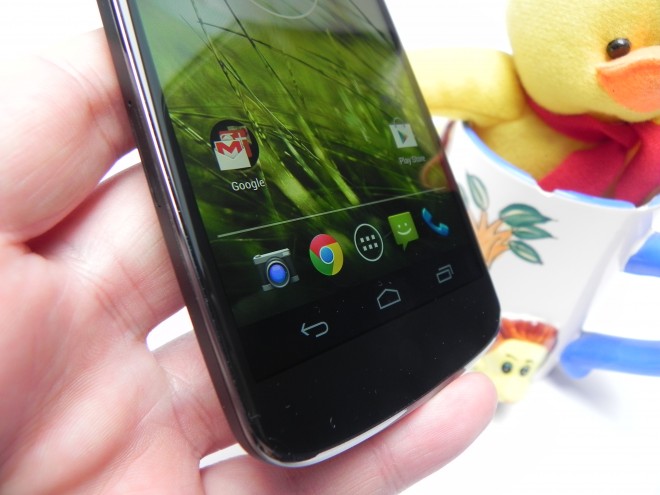 The Vellamo benchmark yields 800 points less on the Nexus 4 compared to its rivals, while the SunSpider and Browsermark 2 tests are pretty low as well. I’ve also dedicated a part of the video review below to Android 4.2 and what novelties it brings to the market. I demoed the Quick Settings area and its features, the lockscreen widgets, improved Google Now and gesture typing. Also, the Photo Sphere and Daydreams feature are two other novelties.

Obviously, the phone had no lag whatsoever and it was really, really fast and a pleasure to use, except for the above mentioned little hassles with the camera UI and design. And now it’s time for Pros and Cons.