Google’s Search by Voice service has just evolved to the point where it not supports more languages than English and Mandarin Chinese plus Japanese. It also received support for French, Italian, German and Spanish, as Google announced just yesterday. 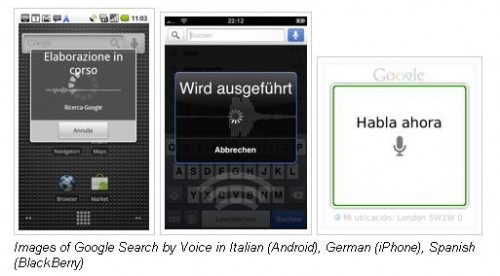 The feature is available on Android phones, on the iPhone and BlackBerries. Google wants this service to be available in all languages and they’re trying to add dialects and languages as we speak. Native speakers in each country are selected and models of spoken words/phrases are collected and used by the software.

Popular queries are the main focus, stuff like directions, restaurant orders and car commands. Google tries to construct a vocabulary of over 1 million recognizable words per language, an impressive task, even for the search engine giant. It should be noted that local accents (like German in Austria) might not be recognized right away.