Motorola Droid 2 finally came out to play, after a bunch of weeks of speculations, leaks and suppositions that it was in fact another smartphone, like the Xtreme or Moto Shadow. Droid 2 posed in images like the one below and you can even check it out in action in the video at the end of this article. 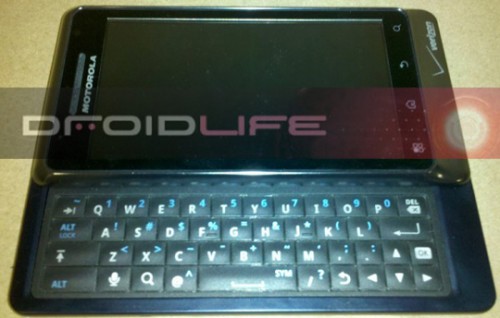 The exterior was tweaked a bit, from the original Droid, so now there’s no shiny gold d-pad and the front side of the handset slides back to reveal the keyboard. Underneath the hood, you’ll find a new 750MHz processor, 8GB of memory, while on the bad news side, HDMI out is not part of the specs.

Droid 2 will be running Android 2.1, with MOTOBLUR included and it’s also likely we’ll get it in stores with Android 2.2 already. Apparently, the handset is gearing for a July launch on Verizon, accompanied by Droid Shadow/Xtreme. If you’re wondering about the rest of the specs, here they are: WiFi tethering, a 3.7 inch screen, a memory card slot and a 5MP camera.

Here’s the Motorola Droid 2 booting up: